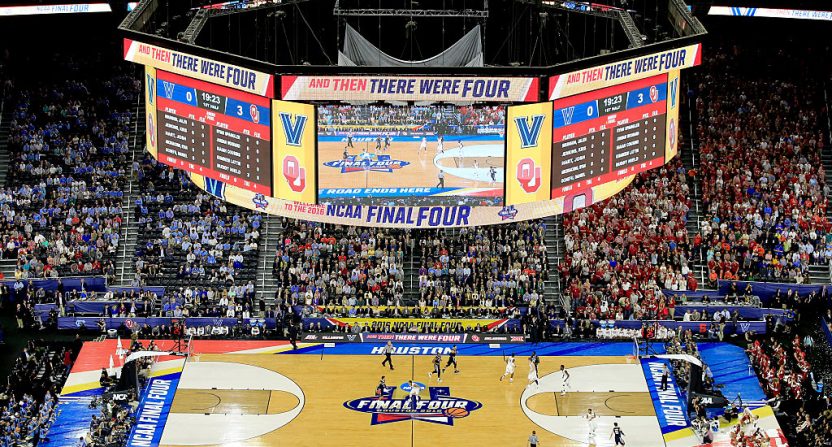 What were the biggest and most important sporting events from the last seven days? One could make the argument that from a national and international perspective they were the NCAA Tournament, the World Baseball Classic, and the USA’s crucial World Cup Qualifier against Honduras.

During the NCAA Tournament, half of the Sweet 16 and Elite 8 games aired on TBS and half aired on CBS.

The historic victory by Team USA in the World Baseball Classic on Puerto Rico was seen on MLB Network, while a Spanish ESPN Deportes feed was aired on ESPN2.

And the USMNT’s 6-0 win over Honduras was shown late on Friday night on FS1. Tuesday’s qualifier was on beIN Sports.

Long gone are the days when you could just turn on one of the four major networks or ESPN and know you wouldn’t miss a major sporting event. With the proliferation of league-owned and conference-owned networks, upstarts like FS1 and NBCSN, and the importance placed on cable, major live sports rights have never been more spread out across the television landscape.

And at the moment it presents an interesting dilemma for sports and their television partners in balancing wider distribution with getting eyeballs to certain networks.

Take the NCAA Tournament, for example. CBS and Turner are partnered together through 2032 at a healthy rate of $1.1 billion per season. And in that partnership both traditional broadcast (CBS) and cable (TNT, TBS, truTV) are going to get their fair share of games. In fact, we’re just coming off the entire Final Four going on cable for the first time airing on TBS last year and it’s crucial that it happen to uphold the deal for both sides. Turner can get a heck of a lot more revenue by airing such a premier event like the Final Four and they can pay out more to the NCAA by being able to air those games.

But by moving to cable, games are naturally being seen by less people. Last year’s championship game was the lowest rated in history (10.6) and it shed over 10 million viewers from the previous year (28.3 million vs 17.8 million).

While it wasn’t on that scale, the WBC Final on MLB Network posted some impressive ratings for the channel. A total of 2.3 million people watched the championship game of the tournament, the second highest audience in the history of MLBN. Another 761,000 viewers watched the Spanish-language feed on ESPN2.

This year’s WBC was seen as a success as the event continues to build in its very early stages. But perhaps a similar question can be asked, is it more important for baseball to bring premier international events to MLBN like the World Baseball Classic to help that network continue to grow in distribution and grow in potential revenue… or is it more important to get as wide of an audience as possible? How many more viewers could the WBC Final have received on Fox or ESPN? It’s a complete guessing game, but it’s worth pondering.

Go down the list of sports and network rights deals and you’ll see this quandary happening all over the place. Don’t let the talking heads fool you, because the entire industry runs on live sporting events and every single cable sports network needs live sports to justify their existence.

Nowhere is this conversation more complex than in the soccer world, where you need to keep a daily Excel file of which games are being shown on which network. In just the last few years, ESPN lost the Premier League to NBCSN while also losing the World Cup to Fox. They, in turn, lost the Champions League to Turner Sports, who have very little recent experience in televised soccer. ESPN still has the European Championships while Fox has the Copa America and the two partner together on Major League Soccer and US National Team broadcasts. Except for when the national team plays on the road in CONCACAF qualifying, because those games are on beIN Sports. Got all of that straight?

NBCSN has made a living as a network gaining exclusive deals with sports that wouldn’t take headline spots at ESPN like the NHL, EPL, F1, and others. When they were left behind by conference realignment, the Big East turned to FS1 for a similarly exclusive deal.

That conference might represent the most intrigue when it comes to sports leagues and their dance partners. While the Power 5 conferences were off striking huge deals and launching their own networks to varying degrees of success, the Big East basketball schools were left twisting in the wind. Instead of agreeing to a lesser deal with ESPN, the conference went all-in with FS1, who would agree to air every game to a national audience. Big East ratings were up from 2015-2016 and averaged 192,000 viewers this year but the success of the partnership depends on your perspective. While average viewership is fairly small compared to other conferences, total viewership is respectable.

Which metric is better? On which numbers should we judge the partnership? It’s a big deal for FS1 to have live basketball to air so they don’t have to resort to airing two more hours of Colin Cowherd or Jason Whitlock replays. Likewise, it’s important for the Big East to gain as much exposure as possible. For the conference, that meant an exclusive deal with FS1 instead of being the third or fourth most important game at any given time on the ESPN family of networks. While the Big East might get higher average ratings on ESPN, they would never get the kind of intimate relationship they have with a network like FS1.

What’s holding up all these corners? It’s the simple fact that right now everyone needs each other. The leagues and conferences need their network partners to distribute events and pay them millions (and sometimes billions) of dollars in rights fees. The networks need the events to justify charging advertisers and cable and satellite fees that fans will pay. The fans need the networks to follow their favorite live sports. And although there aren’t as many viewers, there’s more money in cable and that’s where most of the sports world’s attention is right now.

It’s a cycle that keeps going round and round and will keep doing so until the sports rights bubble finally decides to burst. While that day might not be here right now, it could be looming over the horizon. It’s no secret right now that the cable industry is struggling to keep subscribers because of the increases in cost on all sides. And with live sports being spread so thin it makes it a much tougher decision for sports fans than it used to be. If you’re a huge soccer fan, you might need all the networks. If you like MLB and the NBA, you’ll need both of those league networks, Turner, Fox, and ESPN. College football fan? Then you better have every conference network you can get, even the Pac 12!

It’s easy to see how the bubble begins to stretch and stretch with this in mind. As rights fees go up and cable fees go up it might be up to consumers to finally decide when it’s just too much in too many places.