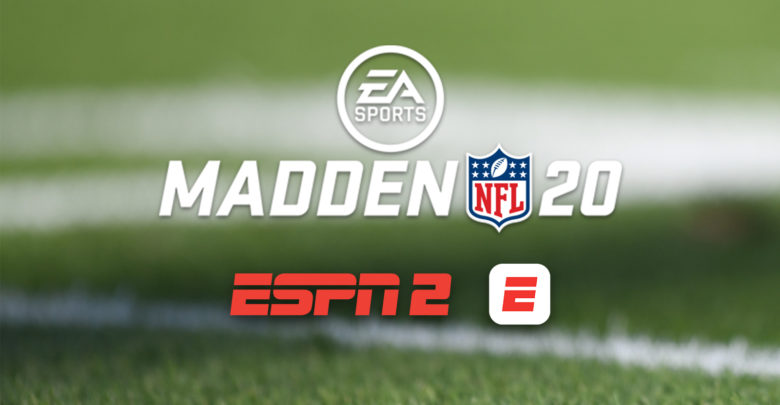 There have been all sorts of celebrity esports tournaments held and televised during the COVID-19 pandemic, and the next one ESPN’s going to is a week-long Madden NFL 20 tournament split between their linear and digital platforms. The tournament, produced with PlayVS and Nerd Street Gamers, will be a single-elimination bracket, beginning Sunday, April 19 with a bracket reveal show, moving to daily digital matches, and concluding with a championship match airing on ESPN2 at noon Eastern on Sunday, April 26. Here’s more info on it from ESPN’s release:

ESPN announced today the Madden NFL 20 Celebrity Tournament, featuring athletes, celebrities and ESPN talent. The tournament will kick off Sunday, April 19 with a bracket reveal show at 12 p.m. ET on ESPN2, before all matches move to ESPN digital and social platforms, including ESPN Esports Twitch and YouTube, ESPN Twitter and the ESPN app. Matches will air each day at noon ET starting on Monday, April 20.

…“Like our broader content efforts on digital and social platforms, esports and gaming are core to our audience expansion priority,” said Ryan Spoon, senior vice president of social & digital content. “We remain committed to serving all fans, and the Madden NFL 20 Celebrity Tournament is a great way to show that, even though participants are competing against each other, they are all on #oneteam.”

“Producing the Madden NFL 20 Celebrity Tournament is a natural progression for Nerd Street Gamers as traditional sports and esports continue to converge,” said John Fazio, founder and CEO of Nerd Street Gamers. “I grew up watching ESPN every day and seeing our brand on there will be a dream come true. Esports is playing a major role in bringing people together during these difficult times and we are excited to work with PlayVS and ESPN for this tournament going towards a great cause.”

“ESPN is sports. It’s the north star for everything relevant, exciting, and compelling about the world of sports. As esports adoption grows, we’re fortunate to run a tournament like the Madden NFL 20 Celebrity Tournament that furthers visibility on such a culturally significant stage,” said Delane Parnell, CEO and founder of PlayVS. “All of the reasons we love sports — competition, community, teamwork, stories — are the same reasons we love esports. ESPN shining a light on these things is important, exciting and we’re thrilled to be a part of it.”

There’s quite the lineup already committed to this tournament, too. Here’s a list of confirmed participants:

It seems smart to handle this as a primarily social and digital tournament, as that’s easy for people interested to seek out and doesn’t come with the criticisms that networks have often received for putting esports on their main linear channels. Also, everyone involved has a substantial social following, so there will be some promotional help there. And the bracket reveal and final on ESPN2 also makes sense; that’s a bit of a broader platform that should bring some more exposure to this,  and it’s a channel that doesn’t have a whole lot of programming these days, but it’s also not the main ESPN network, which often sees complaints when it ventures into out-of-the-norm content (never mind that there isn’t exactly a lot of normal content these days). ESPN also has a long history of showing Madden content in particular on their various alternative channels. We’ll see what sort of audience this tournament draws, but it’s an interesting idea.