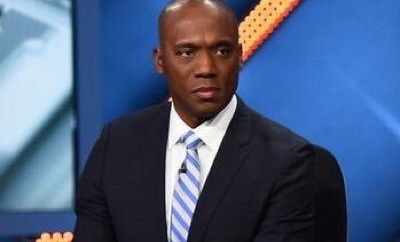 Appearing on the Sports Illustrated Media Podcast with Richard Deitsch, Riddick said this week he has made clear to his ESPN bosses that he is interested in a role on MNF, as either an analyst or a play-by-play man. Via SI.com:

“This is something that has been a goal of mind and ESPN is very well aware that I am very interested in it,” said Riddick, this week’s guest on the SI Media Podcast. “It is the pinnacle of broadcasting as far as I am concerned, the most iconic position in broadcasting. To be involved with Monday Night Football either as a play-by-play person or analyst is something I am hoping I can achieve.”

Asked what ESPN management’s response has been to Riddick’s interest, Riddick said, “It has been very favorable. They are well aware of it. I think you saw my interest in being a part of a live broadcast, a live game, with my involvement with the Pro Bowl this year and that only scratched the surface of what I think I am capable of doing with that kind of platform. I am fired up about the possibility of being involved with the brand of Monday Night Football in any way shape or form and I think the next couple of weeks and months as ESPN figures out where they want to go with that are going to be awfully exciting for me personally.”

Riddick, a former NFL scout and director of pro personnel, joined ESPN in 2013 and has since appeared on shows including NFL Insiders, NFL Live and SportsCenter. He has no experience in the broadcast booth but told Deitsch he has “no reservations” about his ability to call a game.

Riddick would make an unusual but intriguing choice to replace the departed Jon Gruden on Monday Night Football (or even take over for Sean McDonough in the play-by-play role). He lacks the high profile of some other candidates, but makes up for that with his intimate knowledge of the game and his ability to communicate that knowledge clearly. Riddick clearly garners respect in league circles, having been brought in to interview for several NFL general manager jobs over the past 14 months.

For ESPN, however, there might be an issue here of serving diehard NFL fans vs. attracting the general public. True football junkies love Riddick because he’s sharp, insightful and doesn’t condescend to viewers. But those people will probably watch MNF regardless of who calls it, and ESPN likely figures that a casual fan on the fence about tuning in is more likely to do so to hear Manning.

Most often, a network will choose the option that’s appealing to the widest swath of potential viewers, to the lowest common denominator. Riddick needs to hope this hire proves to be an exception.