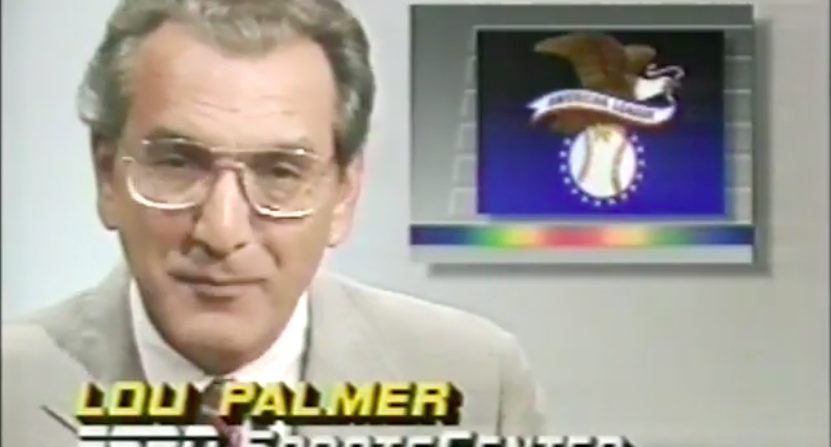 Chris Berman, Tom Mees, and Bob Ley are the people you usually think of when you picture ESPN’s auspicious beginnings in 1979. However, Lou Palmer deserves inclusion in that discussion as a member of ESPN’s first-ever live event broadcast and an original SportsCenter anchor and reporter.

Palmer passed away on Friday in Florida at the age of 83, per ESPN. He died following a battle with lung cancer, per his daughter.

Lou’s career in sports began on the playing field. After playing baseball at Seton Hall he had stints in the farm systems for the then-New York Giants and Chicago White Sox (under his actual name, Lou Puma). Palmer was hired by ESPN in 1978, a year before it went live on televisions for the first time, teaming with former WTIC Radio colleague Arnold Dean on the company’s first live event, a demo broadcast of a basketball game between UConn and Athletes in Action, which was shown to cable executives to showcase ESPN’s potential.

Palmer would go on to become one of the original anchors and reporters for “SportsCenter” and also contributed features for Down the Stretch: ESPN’s Horse Racing Weekly. Per ESPN, he covered the World Series, horse racing’s Triple Crown, the Stanley Cup Final, as well as tennis and golf majors.

Palmer left ESPN in 1985 and would eventually join fledgling WFAN Radio in New York, becoming one of its original studio anchors as well. Afterward, Palmer moved to Florida and became a public-address announcer for Florida State League baseball games and official scorer for the St. Louis Cardinals’ spring training games.

Given the number of people he worked with over the years, the tributes rolled in quickly. ESPN included quite a few in their tribute to one of their founding broadcasters.

He was an original SportsCenter anchor, a friend and major contributor to building the strong foundation upon which ESPN stands today. – ESPN founder Bill Rasmussen on Lou Palmer

He brought much-needed experience at the very beginning, a deep love of baseball, and the ability to write, anchor and bring authority to anything he touched. – Bob Ley on Palmer

His love for baseball jumped through the screen and became an early hallmark of SportsCenter. Those of us who were young anchors – Bob Ley, Tom Mees, and I – will forever be indebted to Lou for his guidance by example. – Chris Berman on Palmer

“Lou Palmer was the first on-air commentator hired by ESPN in 1978. He brought a professionalism to the network that helped establish a rock-solid foundation for SportsCenter and our baseball coverage. ESPN extends its sympathy to Lou’s family and the many people he touched during his accomplished career.”

More tributes poured in via Twitter from former ESPN colleagues and those who worked with or around Palmer throughout his career.

Lou did it all as an ESPN original: SportsCenter, games, reporting. When I was a novice at CNN Sports it was my privilege to sit with him at a series of games and stories, and he was always welcoming, supportive, funny, and instructive. #RIP https://t.co/kMY2GdvMLP

ESPN remembers pioneer Lou Palmer, the first sportscaster we ever hired and a wonderful man. Treated an inexperienced guy (me) like a true colleague and gave us much needed leadership in the very early days. via @espnfrontrow https://t.co/dTgx5TItO9