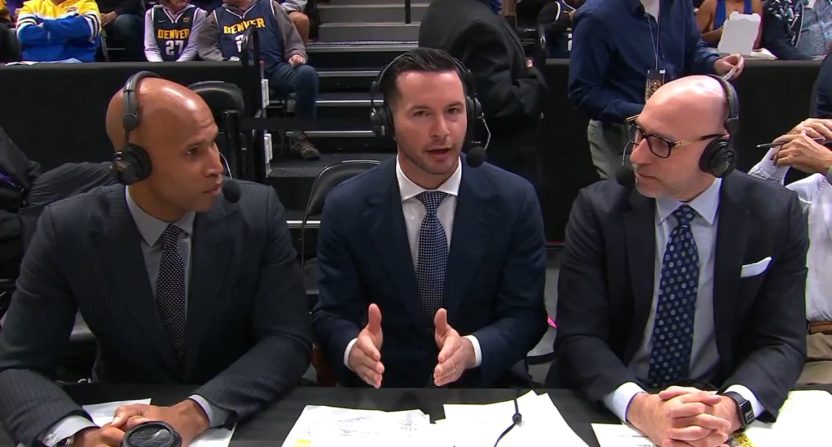 As the lines between athlete and broadcaster are blurred by the new media, it wouldn’t be that crazy to see JJ Redick remove his headset and immediately step back onto the court.

The Los Angeles Lakers were in Denver to play the Nuggets Wednesday night while Redick, Richard Jefferson and play-by-play voice Dave Pasch were on the call for ESPN. Desperate to improve their deplorable shooting woes, the Lakers were staring at a free agent and career 41 percent three-point shooter on the sideline in Redick.

“Richard, we almost had a two-man booth tonight because some of the Lakers were tempting JJ to put on a jersey to help with that three-point shooting,” Pasch said early during the first quarter on the ESPN broadcast.

Jefferson asked Redick if he considered the offer, noting that he hasn’t been away from the game for that long, having last played for the Dallas Mavericks in 2021.

“I didn’t think about it until Darvin Ham offered me a 10-day to play tonight,” Redick said. “My issue was though, it’s really hard to breathe in Denver. And for someone who hasn’t gotten up and down a basketball court in 18 months, I didn’t think tonight was the right time to come back.”

I don’t know how serious the Lakers coach was when he extended the 10-day contract offer to Redick, but the current ESPN broadcaster would definitely improve the team’s shooting deficiencies. Although it would probably take two or three Redicks to make the LeBron James-led Lakers a legitimate contender.

Last year, the Boston Celtics signed Joe Johnson to a 10-day contract, more than three years after the seven-time All-Star played his last game in the NBA. The Celtics also attempted to lure Reggie Miller out of retirement back in 2007, more than two years after the Hall-of-Famer transitioned from the court to broadcasting.

The difference, however, is that the Celtics had something to offer when they sought Miller’s services more than a decade ago. They were a championship contender who went on to secure their 17th title in franchise history that season. The Lakers, meanwhile, are destined for mediocrity with or without Redick.

Does Redick want to come out of retirement to knock down some threes on a bad basketball team at the age of 38? Or would he rather call some NBA games and continue to cement himself as a hot take slayer by battling Stephen A. Smith and Chris Russo on First Take.