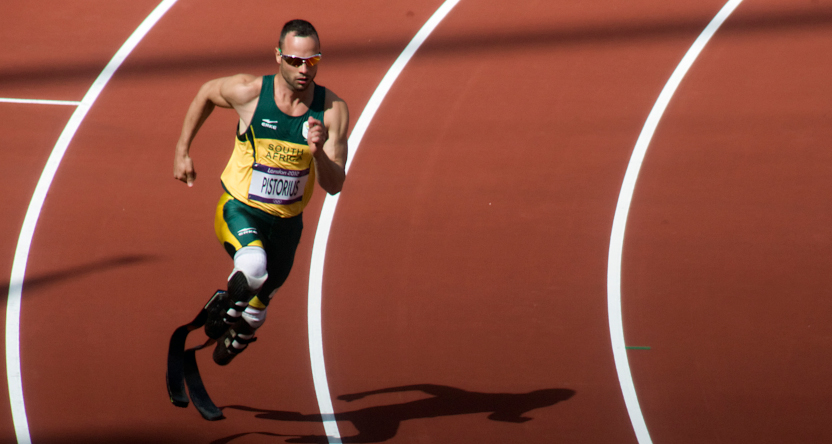 This spring and summer saw a lot of ESPN 30 for 30 installments, filling a gap left by COVID-19 related postponements of live sports. The Last Dance was not technically part of this series (with a co-production from Netflix perhaps playing a role there), but it certainly started ESPN’s documentary emphasis this spring and summer, and actual 30 for 30 installments Lance, Be Water, and Long Gone Summer followed. And now, ESPN is bringing out a four-part 30 for 30 on South African sprinter Oscar Pistorius (seen above at the 2012 Olympics), which is coming to ESPN+ September 27. Here’s more on that from a release:

An international hero who had inspired millions with his determination and refusal to be denied the chance he felt he deserved—suddenly in the midst of a murder investigation. And the circus that ensued around the tragedy made just as many headlines as his initial rise to glory.

Beginning with the confusing, stunning turn of events in the wee hours of February 14, 2013, when Pistorius’s girlfriend Reeva Steenkamp was shot in his home in Pretoria, South Africa, the film flashes back to chronicle Pistorius’s incredible rise from a toddler who had both his undeveloped legs amputated to overnight teenage phenomenon at the 2004 Athens Paralympics. Shattering records and convention, the “Blade Runner” then went on a quest to compete against able-bodied athletes at the Olympics, one that ultimately concluded triumphantly at the 2013 London Games. But less than a year later, he’d be in a South African courtroom, accused of murdering Steenkamp after an argument.

The Pistorius story is definitely a notable one, and one that brings to mind the various 30 for 30s with significant legal/courtroom components. Those include O.J. Made In America, Vick, and No Crossover: The Trial of Allen Iverson, as well as others. And it will be interesting to see how Gordon handles the different dimensions to Pistorius’ story. But Gordon has a significant sports background, directing previous 30 for 30 installments 9.79 (on Ben Johnson and the 1988 Olympics’ 100-meter dash), Hillsborough, and George Best: All By Himself, and Hillsborough in particular suggests he’s well-equipped to take on a challenging story like this.

It’s also interesting to see ESPN premiering this documentary on ESPN+, and making all four parts (which have a total run time of 339 minutes, or 5.65 hours) available immediately there. ESPN has previously debuted some 30 for 30s on ESPN+, including 2018’s Seau. They’ve also had series like Enhanced debut exclusively on ESPN+. And one of the biggest selling points for ESPN+ at the moment is its 30 for 30 library, especially with many of the less-prominent college leagues and the CFL not playing this fall. (It does have a few other things, though, including the NHL’s Quest for the Stanley Cup series.)

So this isn’t wildly out of the norm, but it does provide some further value for ESPN+ at a time where that value is needed. And the all-at-once release strategy means those interested in this series can consume it on whatever schedule they prefer. There certainly would seem to be some interest in a new four-part 30 for 30 on Pistorius, and it will be worth keeping an eye on this to see how it is received.