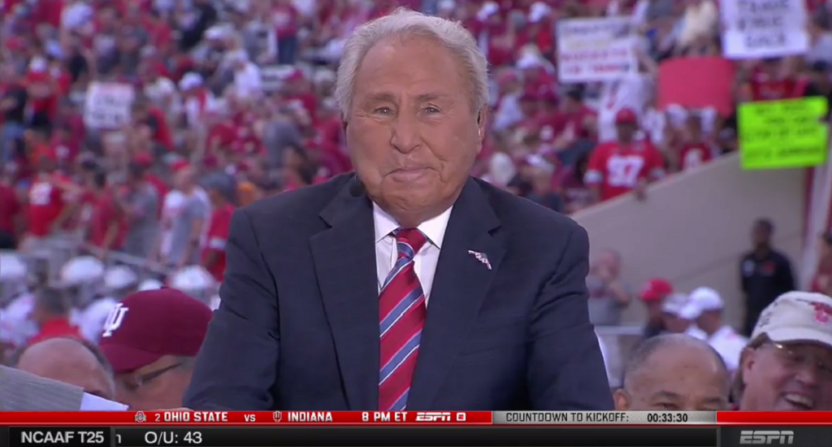 Lee Corso is an eccentric character and seems to be a great guy. Every week on College GameDay, people go wild with happiness if Corso picks their beloved school or go crazy with madness if he goes against their team.

On ESPN’s first College GameDay of the season Thursday, Corso picked against the school he used to coach at Indiana University and instead went with a Brutus head for Ohio State. But that first mascot pick of the season came after an extremely emotional moment for Corso, where the GameDay crew paid tribute to the former Hoosiers’ head coach.

It’s somewhat hard to hear what he’s saying as he gets all teared up, but Corso was describing his son Steve’s game-winning touchdown catch. The winning pass and catch has been nicknamed by the older Corso as “old pine tree slant.”

It was nice of GameDay to take time out of their first show to pay tribute to Corso and let him have his moment. After all, the GameDay crew is a family and in a recent profile of the show and Corso by AP, Corso’s coworkers praised him.

Now 82 and eight years removed from a stroke, Corso is back for a 30th season on “College GameDay.” He can still energize college kids on a Saturday morning like a free-beer tailgate, and for millions of viewers the games don’t begin until he dons a mascot head and picks the day’s marquee matchup. But getting Corso through a show also requires some help, both on the air and behind the scenes. At times his contributions are off topic. Names come out wrong. Words can escape him.

Herbstreit, Rece Davis, Desmond Howard, David Pollack and the rest of the “GameDay” crew have adjusted. Instead of Corso’s limitations hindering the show, they make it more compelling. It feels real, not staged, and for live TV, that’s usually a good thing

“To this day there’s no question in my mind that all the great things that coach adds to the show outweigh those times when his tongue may get tied or he stumbles on his speech or he stumbles over a few words or has trouble getting something out,” said Lee Fitting, a longtime “GameDay” producer who now oversees all ESPN’s college studio shows. “And the times when he does struggle to get some words out, the way in which Kirk and Rece and Desmond and David help coach along, pick up that slack, makes up for it.

“It’s endearing to the viewer. It’s the family members picking another member of the family up.”

Overall, this was a big day for Corso and it makes sense that GameDay honored him. Not only was he returning to the school he used to coach at for work, but he was also back to receive an award.

As  ESPN’s Ryan McGee points out, the Bill Orwin Award at Indiana goes to a non-alumni of the school who made “outstanding contributions” to Indiana athletics. Corso went 41-68-2 while at Indiana, which doesn’t seem that great, but his best season was a big one in program history. In 1979 Corso led the program to a Holiday Bowl win over No. 9 BYU and the Hoosiers finished the year ranked #19 in the AP poll. The Holiday Bowl win was the first bowl game victory in program history.

Here’s video of Corso receiving the award on ESPN’s broadcast:

It’s also easy to understand why Corso was honored at this game specifically. Not only is it a massive game on the Hoosiers’ schedule, but it’s also the first time ESPN College GameDay has ever been to Bloomington for college football.