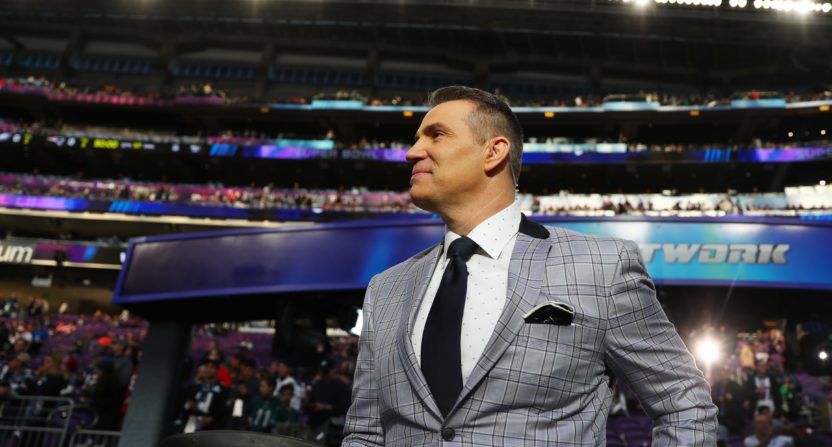 Peyton Manning and Brett Favre may not have worked out as replacements for Jon Gruden on Monday Night Football, but that doesn’t mean ESPN can’t still wind up with an MVP-winning, Super Bowl-winning quarterback in the role.

According to USA Today, the network has had multiple conversations with NFL Network’s Kurt Warner, who remains in “serious consideration” for the MNF opening.

Warner has been floated as a candidate throughout ESPN’s search for an MNF game analyst, but this is the most specific report we’ve seen about talks between him and the network. The former Rams, Giants and Cardinals quarterback has worked at NFL Network since 2010, serving as an analyst on NFL GameDay Morning and NFL Total Access.

From the various reports over the past few months, it sure seems that ESPN is hoping to wind up with a big-name quarterback alongside play-by-play man Joe Tessitore in the revamped MNF booth. The network wanted Manning badly enough to reportedly offer an eight-figure salary that would have made him one of the highest-paid personalities in sports television. After being rebuffed there, ESPN went after Brett Favre, but he fell from consideration after either, depending whom you ask, flubbing his audition or choosing to drop out.

ESPN’s apparent preference for a quarterback, particularly a famous one, would seem to work in Warner’s favor, but he’s got no shortage of competition, from ESPNers Louis Riddick, Matt Hasselbeck, Rex Ryan and Booger McFarland to recently retired offensive lineman Joe Thomas to active tight ends Greg Olson and Jason Witten.

ESPN will presumably decide somewhat soon who gets the game analyst role, given that it’s been three and a half months since Gruden left the network to coach the Raiders. Then again, it’s clear at this point that ESPN is in no rush, so maybe we’ll have to just keep waiting.