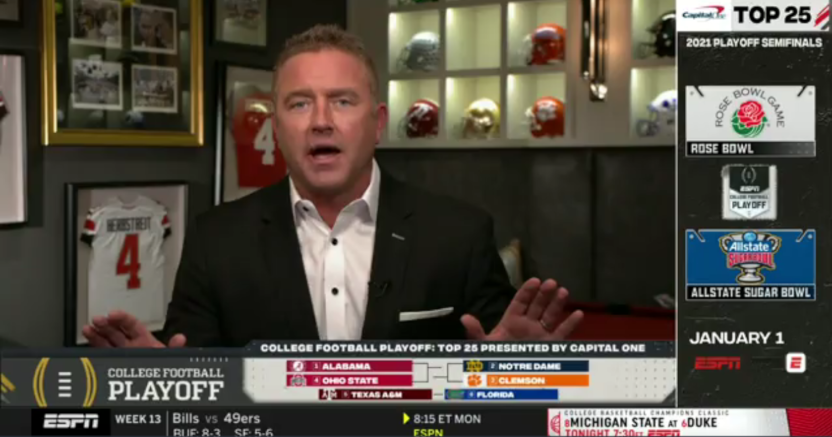 The Cincinnati Bearcats made history on Sunday when the undefeated AAC champion made it into the College Football Playoff, the first Group of Five school to do so since the playoff began in 2015. Their prize is to take on No. 1 seed Alabama Crimson Tide in the CFP semifinal, which will be played on New Year’s Eve in the Cotton Bowl.

It’s a testament to how well Luke Fickell’s team has played not only this season but over the last couple of years. That’s notable because when it comes to a G5 school even having a chance to make the CFP, there is a litany of factors at play, some of which are out of the team’s hands, for them to be able to even have a chance.

Not only did Cincinnati have to go undefeated, but they had to start the season with a quality ranking (No. 8 in the initial AP Poll), they need to have at least one quality win over a P5 opponent, preferably one that is also in the running for the CFP (Notre Dame), and then pray to whatever god you want that a bunch other P5 contenders lose when it matters.

Left out:
3. Also win all your regular season games the year beforehand https://t.co/uH5ikahZ1U

Everything fell into place for Cincinnati on Saturday when, along with their win, Alabama beat Georgia (eliminating the potential threat of competing with two-loss Tide) and Oklahoma State lost to Baylor, taking out their most likely threat to the No. 4 seed. Had the Cowboys won the Big 12 Championship, it’s very easy for us to be talking about them today and not the Bearcats.

Cincy may have even benefitted from Brian Kelly deciding to leave Notre Dame before the CFP was announced, as a coaching change enters the conversation as “part of our protocol,” according to CFP Chair Gary Barta.

The point is, Cincinnati did everything that was asked of them, and still, the stars had to align for them to be in the College Football Playoff this year. This isn’t new. This is something everyone in college football knows.

Just ask Kirk Herbstreit. Back in November, after Cincinnati was ranked No. 5 by the CFP committee, Kirk made it clear that this did not mean they’d move up into the Top 4 even if one of the teams ahead of them lost. They didn’t simply “deserve” the right.

When Central Florida was making their undefeated run through the 2018 season and garnering a lot of hype for inclusion in the College Football Playoff a year after going undefeated, Herbstreit was one of the leading voices against their inclusion, saying they simply hadn’t played good-enough opponents to be considered, something often held against G5 schools who do everything right but get punished for not being in a P5 conference. When Herbstreit eventually said that the playoff might need to be expanded, it was to let in more teams from the P5 conferences, not undefeated G5 teams.

Herbstreit is an influential voice in the world of college football. What he says on College GameDay and on other college football programming is heard by millions and helps shape the narrative around the sport. And it’s also hard to separate the fact that ESPN owns the broadcasting rights to the College Football Playoff, which means the broadcaster has a vested interest in the matchups that will generate the most viewers, which is always going to include P5 schools over G5 schools.

The line between editorial and bottom line at ESPN can be very blurry sometimes, especially when it comes to college football.  So on Sunday, when we saw that Cincinnati was the No. 4 seed in the CFP during ESPN’s announcement show, the smug sarcasm that Rece Davis and Kirk Herbstreit had for people who don’t think schools like Cincinnati have the ability to make the CFP was a bit much, to say the least.

“The sound you hear is this glass ceiling idea,” said Davis, who then made the sound effect. “They’re the first Group of Five team ever to make the College Football Playoff.”

“But I’m confused,” said Herbstreit. “What about that narrative that the Group of Five wasn’t allowed…should start their own…I thought there was a lot of buzz out there that the committee would never put a Group of Five [school] in. That’s weird. They must not have gotten that rule.”

No reason why @KirkHerbstreit needed to go on a sarcastic rant about G5 fans thinking they’d never be allowed in the playoffs. Cincy had to go 25-1 over two years with the same roster and staff, and STILL they only slipped in at 4. Don’t act like we’ve been hysterical.

Shame on Kirk Herbstreit for how he reacted to Cincinnati being ranked in the Top 4.

Kirk Herbstreit going full snark with “Oh, what’s this, Cincinnati? I thought a group of 5 team couldn’t make it” is either ignorant or oblivious.

The first job of the committee is to keep an antritrust lawsuit/mass departure out of the picture. They had 100% no choice.

The committee didn’t pick the Bearcats ahead of Power 5 teams. They put them at No. 4 because of a lack of options elsewhere.

Kirk Herbstreit sarcastically asking why the Group of 5 is in the playoff because he thought they "weren't allowed" is infuriating, because it's obvious Oklahoma State was 2 inches away from totally screwing Cincinnati out of a spot.

Of course, Herbstreit doesn’t acknowledge all of the things that had to fall into place for the undefeated Bearcats to get into the CFP, and even then making it as a No. 4 seed despite being the only unbeaten in the field.

It’s a lame chiding of college football fans and audiences who are simply responding to the system they’ve been shown over and over again. Even now, everyone knows that if this situation repeats next year, there’s a very strong chance a similar G5 school would get snubbed in favor of a P5 school.

Cincy’s inclusion is less proof that the system works and more proof that the system tries its best to keep schools like Cincinnati out but can’t always. Does that make it fair? No. So maybe Kirk and ESPN shouldn’t start rubbing it in people’s faces when they’ll likely be back next year defending the CFP’s decision to include 11-2 Oregon over 13-0 Houston.