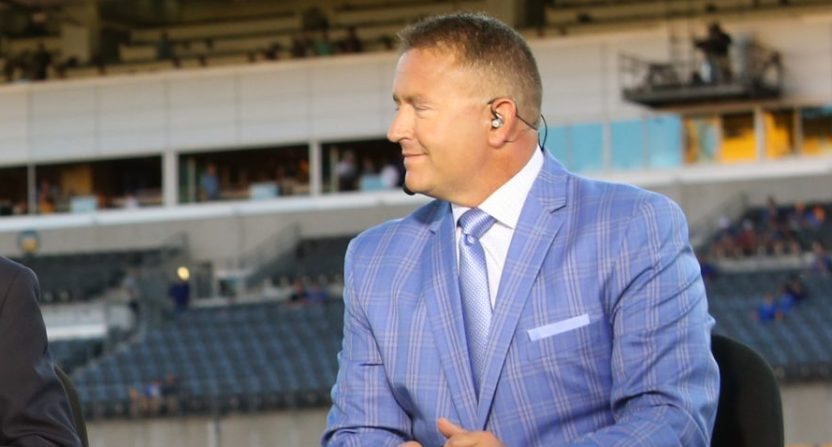 Back in March when Kirk Herbstreit took Amazon’s Thursday Night Football analyst role, but also signed an extension with ESPN to continue on College GameDay and ABC’s Saturday Night Football, there was some discussion of how he’d be able to balance all that. Herbstreit had long shown an interest in the NFL, calling some ESPN Monday Night Football doubleheaders with Chris Fowler, appearing on ABC draft coverage, and talking about his desire to call games at both levels. But regularly doing two games a week has proven to be a challenge even at the NFL level alone, and seemingly gets harder still when there’s a NFL/college split and a college studio show as well.

So far, Herbstreit (seen above on GameDay ahead of a Sept. 1 West Virginia-Pitt game) has seemed to be up to that challenge. But there is a lot on his plate at the moment, and there likely will be for years to come thanks to his Amazon and ESPN contracts. And Herbstreit talked about the difficulties around this in a media conference call this week, making it clear that he’s enjoying doing all these jobs, but he has found doing so even more challenging than he initially thought. Here are the two key questions and answers there, from an ESPN Press Room transcript:

How is the travel working for you this season with TNF, College GameDay and Saturday Night Football? Is it something you feel like you might have to cut back on at some point?

Herbstreit: This has been… When I signed on, I signed a five-year deal with Amazon, and I re-upped a five-year deal with ESPN, so that I linked them together. I knew when I signed on to do the Thursday Night game, I knew that it was going to be a big challenge, as far as… Because I’m a big prep guy. And so to be able to get on air, it requires a lot of work for me, to watch film, and get ahold of the coaches and the players, and all of that.

So I’ve really almost… It sounds stupid, but I’ve tried to stay incredibly grateful and positive. I think when you get tired, it’s easy to complain, it’s easy to say, “Then I have to go to Montana, and then I got to fly all…” It’s so easy to go that path, and I’ve done the opposite. I’ve just been… I’ve tried to stay almost in a Navy Seal mentality. No one cares. End of the day, you could sit there and talk about… You guys maybe do it in your business like, “Oh, you’re never going to believe this. I’ve got to get up at 4 a.m.” And people are just like, “Oh, really? That’s great.” No one cares.

And so, once you accept that nobody cares, you don’t need to complain. And so, I don’t ever complain about anything. I bust my ass as hard as I can to be prepared, the most prepared analyst I can be. I try to keep everything in a silo. Like this week, I don’t have Thursday night, but normally, I’d be prepping very hard with my boards that I have that are made for me, and then I just put all my notes on them. And this week, all I have is Notre Dame and USC, but next week I’ll have the Patriots and the Bills. And I think it’s a mindset of staying, like I said, positive, and grateful, and work as hard as you can. But it’s been much more than I anticipated, and I’ve got four more years of it, so there’s no backing out now.

Do you see at any point where you would give up GameDay and focus only on that Saturday night game? Or are you committed all the way through Thursday, Saturday morning, Saturday night for the rest of this contract?

Herbstreit: Yeah, I’m completely committed. And I think the part when people are like, “Geez, you call a game on Thursday and then you call a game on Saturday,” that’s hard. But then when you throw a three hour… You’re talking about every game or every… West Coast to East Coast. That’s probably the tricky part is being prepared for a three-hour studio show. But no, I would never even let my mind think of that. I’m already thinking about what do I want to do after my five years? Do I want to stop working? Do I want to just enjoy my family? Do I want to just do GameDay? Do I just want to call a Saturday night game? I don’t know what, I’m already thinking about, okay, I’m on the treadmill for four more years, and then see where I am at that stage of life and see what I’m going to do. But no, it hasn’t never even crossed my mind to take something off my plate.

There are a few interesting things in there. For one, this spells out that Herbstreit’s Amazon and ESPN contracts overlap. That makes some sense, as that would allow him to be completely free for whatever opportunity comes up after those rather than having to try and find one-half of a new job. But it does mean that this heavy workload for him looks to be in the cards for some time, unless he does give up GameDay. And on that front, it may be notable that Herbstreit told AA’s Ben Koo on the AA podcast in 2017 that while he wants to keep both those roles, continuing to call games was his higher priority at that point:

The greatest thing about my job is I get to do both. I’ve never really gone there. I have talked with my wife a little bit about what about down the road what I might do, but I’ve never REALLY thought about having to make that choice the way you just put that… I love GameDay because I love having opinions on teams and conferences all around the country and I love that fans tune in to watch that show. I love helping shape opinions and people disagreeing and agreeing… I love to be in the middle of the conversation for some of the big subjects and I love the guys I work with on the show. It’s really hard for me to imagine not doing that.

But at the same time I really, really, really love calling the games of the week. Especially at the end of the year when the games get bigger with the playoffs and the National Championship. I just have no idea which one I would pick. My contract goes for another seven years… at that point I couldn’t imagine not calling the games. So I guess if down the road maybe I would just call the games. Kind of what like Fowler has done at this stage of his career where he’s just doing the games in tennis. But that’s not my goal at all. I don’t want it to come across like that’s where I’m headed, because that’s really not my goal. If you are asking me which one would I seven years from now if I could only do ONE, I guess I would lean towards just calling the games.

It’s also worth considering the travel involved for Herbstreit. The toughest part of this would seem to be when GameDay and the Saturday night game he’s calling are in different locations. And that’s happened nine times out of 12 this year. However, that portion of it could possibly get easier when the ESPN/ABC deal for top SEC games (the former CBS package) kicks in next year; it seems likely GameDay will be at several of those top games, and while it’s unclear how the ESPN/ABC announcing assignments will shift under that new deal, it certainly would seem to be logical to have Herbstreit calling more games he’s already at.

The last thing to keep in mind here is what Herbstreit has said about GameDay overall. He certainly hasn’t been down on it. In fact, earlier in that transcript, he talks about how much he’s enjoyed the energy Pat McAfee has brought to the show, saying “For me personally, 27 years into this, I can’t remember having more fun than I’ve had this year, and Pat is definitely a big part of that.”

But it’s maybe worth remembering that Herbstreit has spoken more overall about how he loves games than how much he loves GameDay. And he specifically cited the challenges of prepping for a three-hour studio show in his answer to the travel question (which seems to make sense; prepping to call a game lets you focus on just two teams, while a sport-spanning studio show like GameDay requires a wide range of prep). So, while Herbstreit is saying his full intention is to stick with all this (“I’ve got four more years of it, so there’s no backing out now,”) it does seem like GameDay could maybe be what gets let go (or winds up reduced, possibly with remote appearances when he’s not calling the game in question) if he does need to dial the workload down at some point. At any case, it will certainly be worth keeping an eye on how this balancing act continues to go for him.