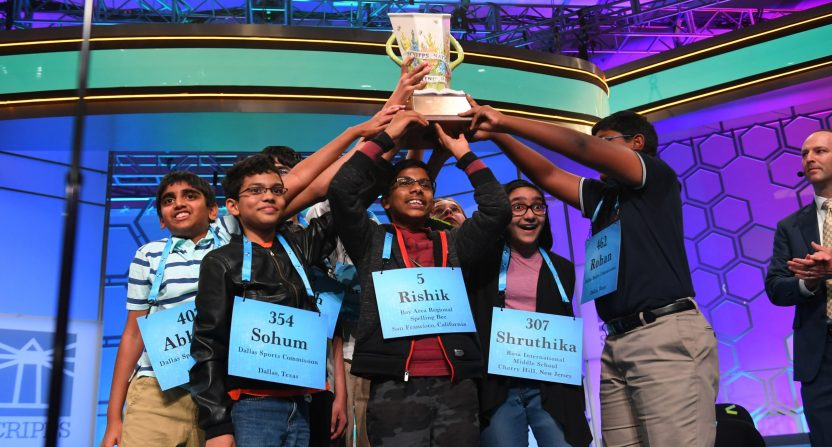 The 2020 Scripps National Spelling Bee was canceled due to Covid, just one of the many sports and sports-adjacent events we missed out on.

It’s back in 2021, though, and ESPN announced their coverage plans today for the Bee, which they’ll be carrying in primetime this summer. Returning to anchor ESPN’s presentation: Kevin Negandhi, who has prior spelling bee hosting experience. Negandhi will be joined by reporter Jen Lada and longtime spelling analyst Paul Loeffler.

Negandhi previously hosted the event in 2016 and ‘17.  Paul Loeffler, a finalist in 1990 and the voice of Fresno State athletics, will return as expert analyst for a 15th year.  In addition, Jen Lada, a reporter and host on a variety of ESPN programs including College GameDay Built by the Home Depot and College Football Live since 2015, will serve as an interviewer and reporter.

“I’m thrilled to be returning as host of the Scripps National Spelling Bee,” Negandhi said.  “Due to my schedule in 2018 and 2019, I missed out on the fun, but it’s great to be back to share the stories about the competitors and what drives them at a young age to be the best in the world. I’m looking forward to teaming up again with the best in the business in Paul Loeffler, Jen Lada, and producers Bryan Jaroch and Steve Ackels and the rest of our dedicated crew who love the Bee and what it stands for.”

The championship this year will be a bit different than prior editions, for obvious pandemic-related reasons. Earlier rounds will be held virtually, followed by a final round that will be held in person in Orlando and carried live on ESPN2 in July.

The 10 to 12 finalists who will travel to Orlando for the finals will be determined by a series of virtual spelling rounds that will be held in the lead-up to the July 8 finals: the preliminaries and quarterfinals on ESPN3 on June 12 and 15, followed by the semifinals on ESPN2 on Sunday, June 27.  Coverage will total more than 20 hours.

And while it’s not quite college football Megacast coverage, ESPNU will bring back a simulcast geared towards allowing viewers to play along a bit at home, which is a nice touch:

The multiple choice Play Along channel returns on ESPNU for its seventh year for the semifinals and finals, offering fans a one-in-four chance to pick the correct spelling of the given word, allowing fans to compete along with the spellers. The Play Along version also features informational boxes highlighting the word’s etymology, definition, clear pronunciation and part of speech, as well as live tweets, the speller’s bio and more. Back for a third year at www.spellingbee.com/playalong is an online interactive Play Along, a fun way for viewers to test their spelling prowess on their computer, tablet or phone.

The Spelling Bee isn’t the most widely appealing bit of content in the ESPN rights library. That’s obvious. But, hey, after the last year+ of disrupted or canceled sports, not to mention the rest of our various societal travails, there is something nostalgic and comforting about the knowledge that if we want to tune in and watch battle it out via spelling on national television, we can.