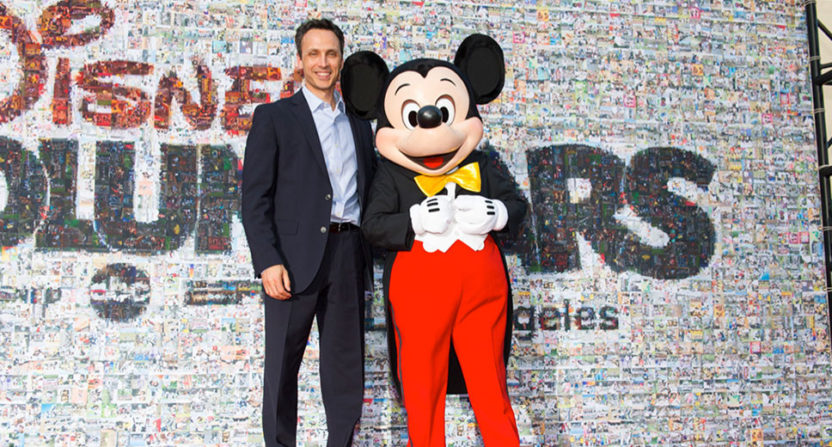 This week saw some interesting news with Disney direct-to-consumer and international chairman Kevin Mayer departing for TikTok (and its parent company, ByteDance), and that news has some potential effects on ESPN. Mayer’s position overseeing Disney’s streaming services meant he carried a lot of responsibility for ESPN+ (as well as Disney+ and Hulu), and he regularly spoke about ESPN+ and Disney’s larger sports strategies. And while Mayer’s position will be filled by Rebecca Campbell (who was previously in charge of Disneyland), some of the executives who reported to Mayer will now be reporting to ESPN president and Disney Media Networks co-chair Jimmy Pitaro and chairman of Walt Disney Television and Disney Media Networks co-chair Peter Rice instead. Tom Dotan and Jessica Toonkel of The Information wrote this week that both Disney Media Distribution President Justin Connolly and Ad Sales President Rita Ferro will now report to Pitaro (seen above in 2013) and Rice. That seems to bolster Pitaro’s position within Disney.

Of course, Pitaro had a reasonably strong position before this. ESPN’s quite an important division of Disney, which is why it always gets a fair bit of questions during Disney earning calls, and Pitaro had a lot of power and a lot of responsibility even before Mayer’s exit. But various moves, including the selection of Pitaro in the first place rather than an internal ESPN candidate and the decision to put ESPN+ under Mayer’s streaming division, made it look to many observers like Pitaro was tied more closely to Disney headquarters than his predecessor John Skipper was, especially with ESPN+ playing a crucial role in many new ESPN rights negotiations. Campbell will still be overseeing ESPN+ as Mayer’s replacement, and Pitaro will be working with her, but the shift from Mayer (who was discussed as a likely heir for past Disney CEO Bob Iger before parks chairman Bob Chapek got that job) to Campbell (who will be new to the direct-to-consumer role) may mean that the DTCI division won’t have quite as much influence on ESPN decisions in the future. And the shift in reports of Connolly and Ferro may be particularly notable there.

Back in 2018, we covered the impending retirement of long-time ESPN ad sales chief Ed Erhardt and the assumption of his duties by Disney executive Ferro, which seemed to be another sign of further integration between ESPN and Disney’s other media networks. That’s now shifted a bit with Ferro going from reporting to Mayer at DTCI to reporting to Pitaro and Rice. There’s still an overlap between ESPN ad sales and ad sales on other Disney properties (linear and streaming), but Pitaro is now one of the two people overseeing that area. So that’s moving some responsibility from the DTCI division to the media networks division.

The shift with Connolly also seems notable. Like Mayer, Connolly is a figure who’s been regularly quoted on ESPN topics, including their overall streaming strategy. And in December 2017, he was cited as a potential successor for Skipper before Pitaro was tapped for that job. Connolly has played an important role in ESPN distribution arrangements over the years, especially with streaming bundles, and his role seemed to be further evidence that some important ESPN areas were being handled at DTCI rather than in Bristol. With him now reporting to Pitaro (and Rice), that seems to shift some power back to Bristol.

There’s a case for these moves, and it perhaps illustrates how the overall Disney situation has changed since Pitaro became ESPN president in March 2018. At that point, ESPN appeared in some turmoil thanks to political controversies, discussion of losing the NFL, and Skipper’s sudden resignation, and there were a lot of big decisions ahead for Pitaro. Meanwhile, ESPN+ and Disney+ were still in the planning stages, and ESPN+ was largely seen as a way to test the waters and test the interface for the eventual meal ticket of Disney+ (which seems to have been the right call given how their respective subscription numbers have gone) and the Disney+/ESPN+/Hulu bundle. So having ESPN+ firmly under the Disney+ division made some sense there. Also, a Wall Street Journal report after Skipper’s resignation discussed how “tensions built up over time” between Iger and Skipper, with some of that covering divides between Disney headquarters in Burbank and ESPN headquarters in Bristol. Appointing Disney exec Pitaro to run ESPN while also putting some ESPN functions under Mayer seemed to strengthen Iger’s central control over ESPN, and there was some logic to that approach.

The situation is a lot different now, though. For one thing, Iger is no longer Disney CEO, and while he is still executive chairman and has been even reportedly “effectively running” Disney amidst COVID-19 disruptions, he and Chapek both have a lot of more urgent crises (especially around what Disney parks and cruises reopenings look like) to address than anything at ESPN. For another thing, Pitaro is no longer a rookie ESPN president; he’s been running the company for two years, and both the politics and NFL issues in particular are drawing much less chatter than they were, so there aren’t urgent fires to put out there.

Yes, ESPN is facing issues from the COVID-19 pandemic and the sports shutdown, but their contracts give them a lot of time to make up their promised numbers of live events, and they’ve done well with some programming like The Last Dance and the NFL draft. They’re far from the most dire division at Disney, and they seem in pretty good shape relative to other sports networks. So giving Pitaro some more responsibility at this point seems somewhat logical, especially with Mayer’s division shifting from being run by a Disney CEO candidate to someone new to that role. But it is interesting to see those shifts, and to see supervision of some important roles return to the ESPN president. And that, combined with the departure of a prominent figure like Mayer, makes it seem like Pitaro’s in a stronger position within Disney than he was before.