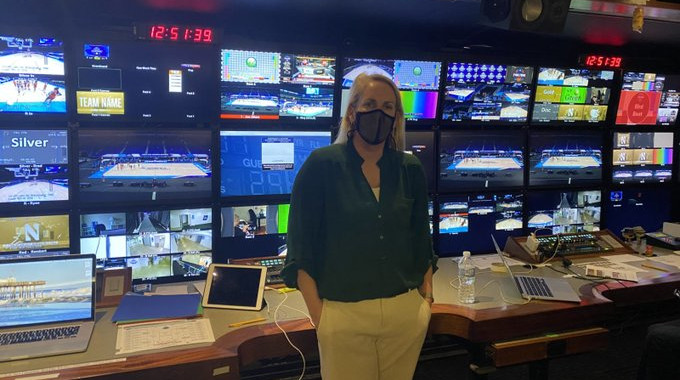 This year, ESPN’s coverage of the women’s NCAA basketball tournament will make some history. They’ve named Kerry Callahan, who’s worked at the company for more than 20 years, as producer of the Women’s Final Four (which will see No. 1 Stanford and No. 1 South Carolina tip off at 6 p.m. ET Friday, then No. 1 UConn and Arizona tip off at 9:30 p.m. ET Friday , with the winners meeting in the championship game at 6 p.m. ET Sunday; all games are on ESPN). Callahan is the first woman to serve in that role. Here’s more from what coordinating producers Pat Lowry and Kate Jackson told ESPN Front Row about Callahan:

“ESPN’s commitment to the NCAA Women’s Basketball Championship allowed us to select almost any producer at the company to lead this telecast,” said Lowry. “Kerry was the clear choice. She worked her entire career to be ready to take on this role. We are very proud of her. It is an added bonus that she is a woman.”

“Not only is Kerry a great producer, she is an incredible leader,” added Jackson. “Kerry is thoughtful and pragmatic. She creates a space where all ideas are welcome and valued. The result is a creative and cohesive telecast that’s really fun to watch. In a time where representation matters, Kerry is a shining example for all the women who will follow in her footsteps.”

That piece also includes some quotes from Callahan:

Walk us through your journey at ESPN.
I have been at ESPN for more than 20 years. I started in 2000 as an event production PA. I have remained in events ever since, working a variety of different sports that include college basketball, college football, NFL, MLB, tennis, golf, and Special Olympics.

What is it like to prepare for an event like the Women’s Final Four?
This year is a unique challenge because the event itself is unlike anything we have covered, so discussion and planning have been crucial every step of the way. There are changes constantly happening as we figure out what works in this new format and what we might do differently in the future. It has been a terrific learning experience and an opportunity to rethink the way we cover the NCAA Women’s Basketball Tournament.

What does it mean to take on this new role, and how does it feel to be the first woman to produce the Women’s Final Four?
It is an honor to get the opportunity to produce the Women’s Final Four. The passion of the players and coaches is so genuine, and we love being able to cover the sport on its biggest stage. Our production and technical personnel are so talented, and it’s incredible to be surrounded by such a supportive team. We all feel it is a true privilege to document the crowning of the next NCAA Division I Women’s Basketball Champion.

Here’s an ESPN trailer for these games:

It’s certainly notable to see a woman named to a prominent lead production role for a marquee sports event, as that hasn’t often happened. (We have seen some all-female productions and all-female broadcasts recently for some regular-season games across various sports, and that’s encouraging, but it’s still a step further to see a woman tabbed as the producer of a prominent national championship.)

And there should be plenty of interesting storylines for Callahan and ESPN’s telecasts to cover here. Those include South Carolina’s Dawn Staley and Arizona’s Adia Barnes marking the first time the Women’s Final Four has had two Black women as head coaches, UConn’s Paige Bueckers (the first freshman to win AP Player of the Year) facing off against Arizona star Aari McDonald, and Stanford head coach Tara VanDerveer (who passed Pat Summitt in career wins in December, and was just named Naismith women’s coach of the year) in her 14th Final Four, leading the No. 1 overall seed Cardinal. We’ll see how these games and these broadcasts turn out.