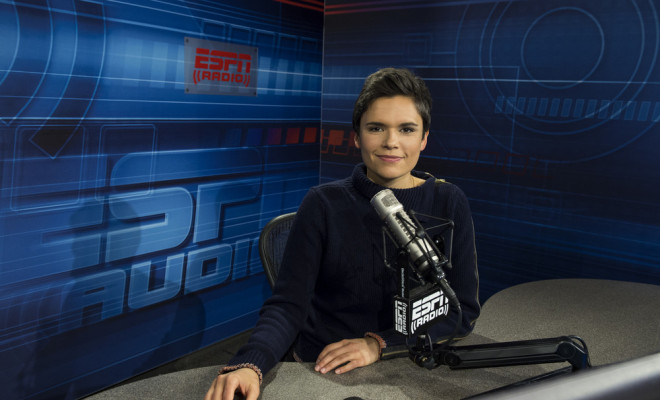 After five years, Kate Fagan is moving on from ESPN. As per Ben Strauss of The Washington Post, Fagan was offered a contract extension, but turned it down. She’ll be leaving at the end of the year, and told Strauss she wanted to pursue other projects in areas ESPN isn’t focused on:

“To continue at ESPN I would have to be immersed in the day-to-day in sports,” Fagan said. “And I found myself more and more interested in other aspects of sports — like how it connects to our culture. That was not going to be the big business of ESPN.”

…“I think I thought at one point that I wanted to do a show — and could do a show — that made women’s sports really cool,” she said. “I thought there could be a show on some of the tangential topics — LGBT issues and mental health. Five years ago I thought I could host a show that introduces new female characters to the women’s sports world. This isn’t ESPN’s fault, but I’m not that naive now.”

“I still think ESPN cares about those important stories, regardless of whatever slight shift there is,” Fagan added.

What’s Fagan moving on to? Well, Strauss writes that among other projects, Fagan is developing a show with Embassy Row (the Sony-owned production company run by Men In Blazers‘ Michael Davies, whose portfolio of shows includes everything from Good Morning Football to Bravo’s Watch What Happens Live to Comedians In Cars Getting Coffee) and working on a script for “a TV series based on the story of a Russian women’s basketball team run by a former KGB agent.” So it sounds like she has a fair bit already lined up.

But it’s interesting to see her exit, given the various roles she played at ESPN (writing for the magazine, appearing on First Take and Around The Horn, and hosting Outside The Lines on a fill-in basis) and given that they reportedly wanted to keep her. Fagan’s comments here are notable, too.

In some ways, Fagan’s comments here sound like what Jemele Hill’s been repeatedly saying about goals beyond ESPN (Hill left for The Atlantic in October), with a desired wider focus than just the day-to-day of sports. But there are perhaps a couple of key differences; for one, Hill made it clear that while she’s still interested in some sports and sports and culture stories, she wanted to do stories completely outside of the sports realm, and ESPN obviously wasn’t a fit there. By contrast, Fagan’s comments here sound like she’s still focused on sports-connected stories, but that her focus didn’t align with ESPN’s. And that’s maybe a further sign of changing times at that network.

ESPN has never been strictly about just what’s going on in sports day-to-day; it’s officially the Entertainment and Sports Programming Network, after all, and they’ve long been looking at things away from immediate results on the field. Everything from the ESPYS to “Who’s Now” to a whole lot of Page 2 wasn’t exactly “sports news only.” But the last six years or so have seen dramatic swings first one way and now the other, and that six-year timeframe’s important, as John Skipper became ESPN president on January 1, 2012 and resigned in December 2017, while Jimmy Pitaro was hired as his official successor this March. That Skipper era saw the heyday of Grantland (launched in 2011 while Skipper was still executive vice president of content, officially shut down in October 2015), FiveThirtyEight (bought by ESPN in July 2013, transferred to ABC News this April) and The Undefeated (officially launched in May 2016 after a long and winding road, still currently an ESPN property).

Since Pitaro took the top job, there’s been a lot of discussion about making ESPN more focused on on-field results and less on connections to culture, politics and off-field issues. Some of Pitaro’s first remarks to employees were “I do not believe that we are a political organization,” and while that wasn’t dissimilar to lines Skipper previously uttered publicly (including an “ESPN is not a political organization” memo in September 2017, around the height of the Hill-Trump controversy), there’s been a lot more action in taking ESPN further away from anything that could be seen as vaguely political under the Pitaro regime (and in the George Bodenheimer interregnum post-Skipper, pre-Pitaro).

Hill left SC6 in January after months where co-host Michael Smith said the two of them felt “muted,” and that show was axed in favor of a more standard just-the-news SportsCenter in March, part of executive senior VP of studio and event production Norby Williamson’s push to bring back a more 90s-style, “a net here that’s age 12 to 92” SportsCenter. (Which ESPN will be quite happy to repeatedly tell you is drawing more viewers than their former programming.) And that’s only part of the larger story; FiveThirtyEight’s shift to ABC News was a definite “We’re not touching anything potentially controversial politically” move, and there’s been a whole lot of talk about ESPN’s desire for “strengthening the relationship with the NFL” under Pitaro, which carries some questions about what that will mean when it comes to stories critical of that league. And Outside The Lines, one of the few ESPN programs specifically focused on off-the-field coverage and one where Fagan was a regular guest host (including for a memorable segment last year where she fired back at Rebecca Carpenter’s criticisms of ESPN concussion coverage), is in an interesting spot at the moment thanks to long-time host Bob Ley’s six-month sabbatical.

But this isn’t just Pitaro; this direction comes not just from him, but from Disney CEO Bob Iger. Iger told Matthew Belloni of The Hollywood Reporter in September the ESPN coverage pendulum may have “swung a little bit too far away from the field“:

I have nothing but praise for the job Jimmy Pitaro has done at ESPN. There’s been a big debate about whether ESPN should be focused more on what happens on the field of sport than what happens in terms of where sports is societally or politically. And Jimmy felt that the pendulum may have swung a little bit too far away from the field. And I happen to believe he was right. And it’s something, by the way, that I think John Skipper had come to recognize as well. But Jimmy coming in fresh has had the ability to address it, I think, far more aggressively and effectively. He has brought back some balance.

Fagan’s departure alone wouldn’t necessarily be a big sign of change at ESPN; it’s notable that (per Strauss’ story, at least) they still wanted her around, and it’s notable that even during the Skipper era, she wasn’t able to make quite the show that she wanted. But in context of the other moves going on, it does seem like ESPN is pulling back towards more of an on-field focus, and away from content that could be seen as political, or even just cultural. And that doesn’t feel like a good fit for some of the stories Fagan says she wants to tell. And she was also one of the remaining figures there most known for regular coverage of various off-the-field issues.

So Fagan’s departure is significant, especially as unlike Hill’s, it’s not about her wanting to go beyond sports. It’s perhaps a further indication that there are certain kinds of sports coverage and stories, especially those with cultural or political dimensions, that ESPN isn’t as interested in these days. We’ll see what Fagan winds up doing, and where those stories wind up being aired.