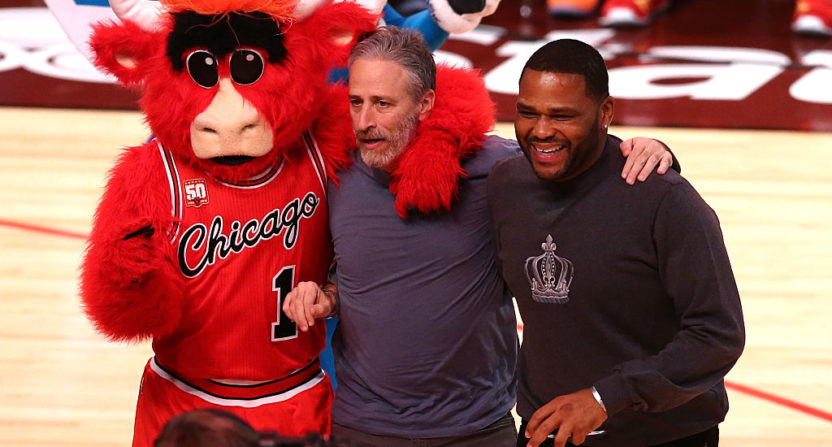 ESPN is bringing in former Daily Show host Jon Stewart as a SportsCenter co-host for one night only, with Stewart joining Hannah Storm for a live SportsCenter from the Warrior Games in Chicago this Friday, July 7. The Games, which feature 265 athletes from the U.S. military, the United Kingdom military and the Australian military, began June 30 and run through July 8. Here’s more from ESPN’s release on just what Stewart will be doing:

Hannah Storm, who recently signed a new deal to remain with ESPN, will team with Jon Stewart, former host of The Daily Show, to co-anchor SportsCenter’s special coverage from the Warrior Games in Chicago on Friday, July 7. A one-hour SportsCenter will air live from the United Center at 7 p.m. ET on ESPN.

…Storm has hosted SportsCenter’s Veterans Day specials from numerous military installations and Stewart has campaigned for veterans and been a strong supporter of the Warrior Games.

“It’s a thrill for me not just to be a part of the Warrior Games but also to work with someone who’s one of the best-known hosts in the television industry and such a great talent,” Storm said. “I’ve always been a fan of his work, and he’s so involved and so passionate about this cause.”

This makes a lot of sense for ESPN on some levels. It lets them do a road event SportsCenter (which has been a focus over the last few years, especially during the slow summer months), it gives Storm a featured opportunity (and one that makes sense for her; in addition to her previous Veterans Day specials, she’s the daughter of a U.S. Marine and was born in the Chicago suburbs while her father was stationed there), and it brings in a high-profile guest host in Stewart (and one a lot of people have been curious about since he left The Daily Show in August 2015; he’s kept a reasonably low profile since then apart from random appearances like the 2016 NBA All-Star Game one above, producing The Late Show With Stephen Colbert and occasionally guesting on it and signing a HBO deal, but one that hasn’t led to much yet). Adding Jon Stewart as a co-host probably makes people more likely to watch a random Friday SportsCenter on July 7, and it’s also around a cause that Stewart is clearly passionate about.

However, there’s certainly a chance of this drawing some blowback from the “ESPN is super liberal” people. Stewart has criticized plenty of people on both sides of the spectrum, but identifies himself as left-wing (“more of a socialist or an independent” than a Democrat, as he told Larry King in 2000) and is definitely perceived that way by many. A New York Times guest column by University of Virginia professor Gerard Alexander back in 2015 even dubbed Stewart the “patron saint of liberal smugness.”

Of course, judging all of ESPN’s programming by who they have as a guest SportsCenter host for one day seems pretty silly, and it doesn’t seem too likely that Stewart is going to turn this into an explicitly political platform (but you never know). However, it is part of the larger picture where it’s getting harder for the network to keep the strict “no politics” approach it once espoused. That doesn’t mean ESPN was wrong to make this move, or that the potential benefits of having Stewart as a guest host (especially getting people to care one way or the other about a Friday SportsCenter in July) are outweighed by the potential criticism, but it will be interesting to watch and see if there is some backlash, or if this is cited as more proof of ESPN’s liberal slant.