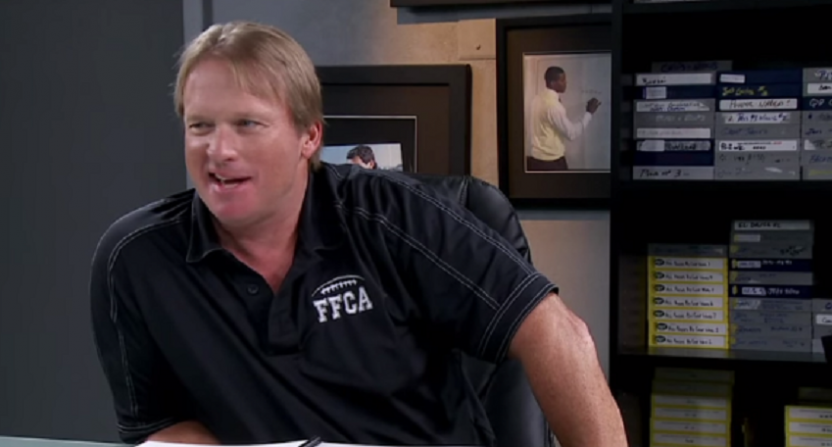 The former Raiders and Buccaneers head coach and current Monday Night Football analyst has been at the center of coaching rumors ever since he entered the broadcast booth. The list of jobs that Gruden has been linked to range from the NFL to college and probably even to NFL Europe. (Is NFL Europe still a thing? No? Well it should be because Jon Gruden coaching the Rhein Fire is something we need in this lifetime.)

The Rams, the Colts, the Eagles, Tennessee, Michigan, etc. He’s even been rumored to be in the mix for the Texas job on two separate occasions! Gruden has been an overarching presence on the coaching carousel but so far he’s always maintained that he was happy working with ESPN and not publicly fueling the fire.

Gruden spoke with Pewter Report ahead of going in the Bucs Ring of Honor and he opened up about past flirtations with returning to coaching and keeping his coaching edge. The former coach gave a fantastic quote about how the research for his ESPN job is preparing him for a potential return to the sidelines.

“I’ve met with several people – I won’t deny that,” Gruden said. “People – just about every year I talk about coming back to coach. I’m not in here every day at 4:30 or 4:00 in the morning watching pinball. You know? I’m preparing myself to come back. I am. Every day. I’m preparing to come back.

“It helps me in my broadcasting and I think if you lose that edge … you can’t come back unless you are totally wired with college football, personnel, schemes, the CBA, how people are practicing, trends, you know. You’ve got stay on top of this stuff.”

Gruden went on to speak glowingly about his time at ESPN where he has cemented himself as one of the most well-known and charismatic analysts covering the game on television. It might be hard to believe, but Chucky is entering his ninth season with ESPN. In that time he’s not only established himself as their top NFL game analyst, but a fixture at the draft time, especially with his QB camp. Of course, it probably doesn’t hurt his enjoyment level that he’s reportedly the highest paid on-air personality at the network.

However, Gruden still didn’t shy away from sharing his love of coaching and connecting his broadcasting career with transitioning back to the sidelines.

“I love ESPN,” Gruden said. “I mean I love what I’m doing. I’m with a great team – a great group of guys. I’m still real close to the game. I still stay in contact with a lot of players and coaches at the league at every level. I don’t know if [all the talk] is flattering or irritating. I don’t really pay attention to a lot of it. But I am – every year – preparing myself to coach. Sometimes I show up at camp and I show up in the offseason and people let me coach. I jump in drills and they still let me install plays and call plays at some places. I still have a lot of fun.”

For those of you college football fans, though, it looks like Gruden has given up on the idea of coaching at the NCAA level. And he has a very good reason for doing so.

“Too many rules, man. I mean I like to work. I don’t like to be working 15 hours a week with players. The recruiting, Facebook, texting, e-mails – all that stuff. Yeah, I’d probably have you in real deep, deep trouble if I was your college coach.”

In case you were wondering, yes, these comments do mark a very public shift from Gruden regarding his stance on returning to coaching. At the end of last season when he was being linked with the Los Angeles Rams job, Gruden said this:

“I’m very happy doing what I’m doing,” Gruden said. “My full attention and focus is on Cowboys-Lions, I cannot wait for our final Monday night game. There’s a lot of chips on the table. Right now, I have no intentions of coaching. I really enjoy what I’m doing and feel like I’m really close to the fire. I’m getting plenty of satisfaction out of doing what I’m doing.”

That was then and this is now. Gruden’s contract runs through the 2021 season but I’m sure the capability exists for him to go back to coaching if the right opportunity presents himself.

That opportunity is not likely to come anytime soon with the new season beginning in the next month. But any franchise with a coach on the hot seat has basically been put on red alert by Gruden that he has got a serious itch to get back into the game. And that means that the Gruden Rumors will only intensify about a hundred fold this season.