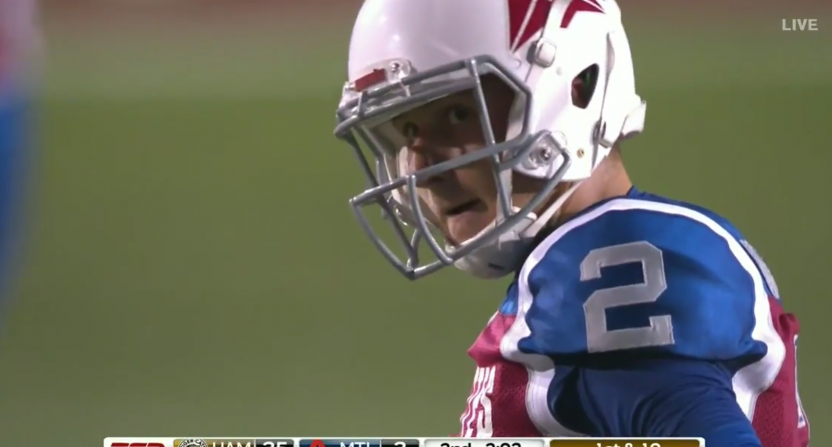 Johnny Manziel’s debut for the CFL’s Montreal Alouettes Friday did not go great. His very first pass was intercepted and he ended up throwing four in total en route to a 50-11 thrashing at the hands of the Hamilton Tiger-Cats. Manizel finished 11 of 20 for 104 yards with zero touchdowns and four picks before being benched. Meanwhile, Hamilton quarterback Jeremiah Masoli, the man Manziel couldn’t beat out with the Tiger-Cats before joining Montreal, threw for 300 yards and two touchdowns in the win.

Manziel has been asking for a chance to prove himself for some time now, mounting a professional comeback after his NFL career fizzled out with the Cleveland Browns. They say be careful what you wish for because not only did Manziel crash and burn in his return to the pros but a lot of people were interested enough to watch him do it, or at the very least, enjoy the schadenfreude that came with watching him fail.

So @JManziel2 starting QB debut for Montreal Alouettes on Friday drew 406,000 viewers for ESPN2. Before that, top CFL game on The Deuce this season was 264,000. Two more Alouettes games on ESPN2 schedule: Aug. 18 and Oct. 28

When ESPN announced they’d be airing all 2018 CFL regular season and postseason games across ESPN2, ESPNEWS, and ESPN+ back in May, they might have had their eye on the potential that Manziel brought with him even if they weren’t sure how many games he’d play and with whom. It’s worth noting that the network lucked out by offering six Montreal games on ESPN2, the most of any team, with four of those games now presumably involving Manziel. Given that Montreal was pretty terrible last season and continues to be into 2018, what could have been some throwaway ratings slots now have a decent value for U.S. audiences.

So ESPN2 got a 0.3 overnight rating for Johnny Football's CFL debacle on Friday night. But that figure was higher than what ESPN got in the same window for the championship game of The Basketball Tournament (0.2)

To put the 406,000-viewer audience in perspective, last year’s Grey Cup between Calgary and Toronto garnered 237,000 viewers on ESPN2 and the ESPN2 high so far this season has been 264,000. Couple that with the fact that the game was an absolute blowout, and it’s a minor miracle that ESPN2 was able to get so many people to stick around for the second half. That’s the selling power of Manziel, who offers U.S. audiences the chance to either buy into his redemption arc or revel in the miserable performance that confirms he’s just not worth the hype or talk.

Of course, even if they believe the latter, all signs point to them tuning in for the Alouette’s next ESPN2 game, an August 18 showdown with the Edmonton Eskimos. Montreal has one game before that so the Manziel Experiment might be over by then for all we know. If not and Johnny Football suits up once again, expect ESPN2 to see a robust number once more. After that, Montreal appears on ESPN2 on September 30 and October 28 as well.

Unfortunately for ESPN, even if Johnny and the Als put something together, they’re almost certainly not going to be contending for a playoff spot. Still, if they can take advantage of Manziel while they’ve got him, it bodes well for what’s possible in terms of CFL ratings in the States, especially when a personality like Manziel is involved.