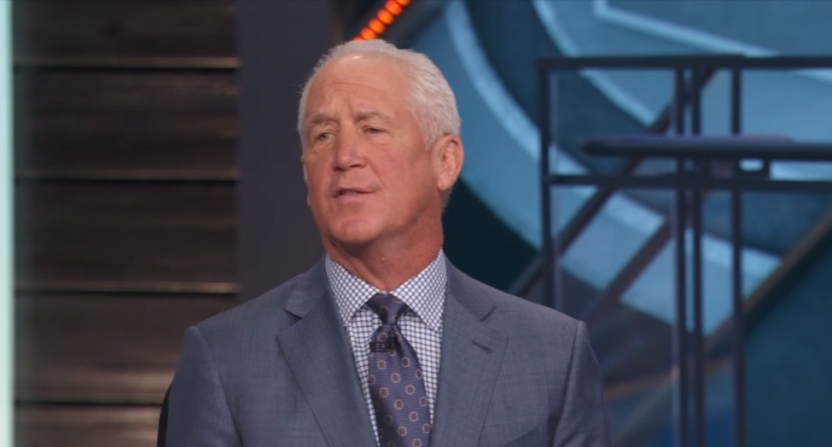 There are sometimes cases of analysts who have recently left playing or coaching careers being too reluctant to criticize their old team, but former Chicago Bears head coach and relatively-new ESPN analyst John Fox (he joined the network last March) has shown it’s also not always great when those analysts do criticize their former team. In a NFL Live segment Monday about which team had the worst offseason, Fox picked the Bears (where he was fired after a 5-11 2017 season and a 14-34 overall mark in three years) thanks to their kicking problems. But he didn’t happen to mention that he created the kicking struggles they’ve had since 2016; those started with Fox cutting Bears’ all-time leading scorer Robbie Gould (who’s since gone on to success with the New York Giants and San Francisco 49ers) after Gould had spent 11 successful seasons with the team. Here’s the clip:

Fox’s comments come around the 1:16 mark, after Damien Woody also picks the Bears (but his comment is about defensive coordinator Vic Fangio leaving to become the Denver Broncos’ head coach) and after Dianna Russini picked the New York Giants (over trading Odell Beckham Jr. and drafting Daniel Jones too high). Here’s a transcription:

“I’m going to go with the Bears too. I think when you’re going to play defense, you’re going to lean on takeaways to help a young offense, and you don’t have a kicker, a reliable kicker that you’re going to need those points from after some of those turnovers…I think the kicking question is really big right now in Chicago, and I think that might be a problem for them this season.”

Citing the Bears’ kicking issues isn’t an unfair comment, as the offseason certainly hasn’t gone well for them from that perspective. They cut incumbent kicker Cody Parkey (who was 28th in the NFL in overall accuracy last season) in March after he hit his sixth upright of the year to lose a wild-card playoff game to the Philadelphia Eagles (that particular kick was slightly tipped at the line, but still, Parkey didn’t have a great year). And they brought in Redford Jones, Chris Blewitt, Elliott Fry, John Baron II, and Eddie Pineiro to compete this offseason, but only Fry and Pineiro remain; Fry has never kicked in the NFL, and while Pineiro made the Oakland Raiders as an undrafted free agent last season, he spent the season on injured reserve and didn’t record a regular-season attempt.

And Fry, Pineiro and Blewitt, the only kickers left on the Bears’ roster by last week’s minicamp (Blewitt was cut after that), all missed 42-yard field goals (the distance of Parkey’s infamous double doink) there. So yes, this is a potential problem; whether kicking struggles alone are enough to equal a “worst offseason” is perhaps debatable, but Fox’s comment here wouldn’t be terribly controversial if it came from another analyst.

However, Fox’s own contributions to the kicking problem in Chicago are notable, and many watching immediately brought that up. Fox was the head coach when the Bears cut Gould ahead of their first game in 2016, and curiously enough, hey did so after not really bringing in competition for him in camp. At that point, Gould was 33 and had made 276 of 323 field-goal attempts in an 11-year NFL career (all with the Bears), a 85.4 percent success rate that’s pretty good in general and especially good considering the often-challenging wind conditions at Soldier Field. He’d made 33 of 39 field goals (84.6 percent) the previous year, a bit down for him, but not necessarily a crisis. And since the Bears parted ways with him, his accuracy has only increased; he posted a perfect mark on 10 field goals with the Giants in 2016 and has posted a 96 percent success rate (72 for 75) with the 49ers over the past two seasons.

Meanwhile, the Bears replaced Gould with Connor Barth, who went 18 for 23 (78.3 percent) in 2016 and 11 for 16 (68.8 percent) before losing his job in 2017 after a final-seconds miss against the Detroit Lions; he hasn’t appeared in the NFL since. He was replaced by Cairo Santos, who went one for two before getting injured and being replaced by Mike Nugent (who made all four of his 2017 field goals, but was let go in the offseason). The Bears then brought in Parkey on a four-year, $15 million deal, and his accuracy promptly took a nosedive from 91.3 percent the previous season to 76.7 percent. And then the double doink proved to be the last straw for him.

Of course, it’s been three seasons since Fox cut Gould, and Fox was only at the helm of the Bears for two of those before Matt Nagy took over in 2018. So Fox can’t be specifically blamed for last year’s Parkey move or for this year’s lackluster kicking competition. And even the Gould, Barth, Santos and Nugent decisions made during Fox’s tenure likely involved general manager Ryan Pace (who still holds that role) as well, at least to some extent. So Fox doesn’t necessarily deserve all the blame for the Bears’ current kicking problems, and he’s not wrong to point them out.

And maybe Fox’s comment about the Bears having the worst offseason is actually objective analysis rather than some sour grapes. Kicking issues alone don’t necessarily seem to justify “worst offseason,” but this segment had only 20 seconds or so from each analyst, so it’s not really an in-depth dive. But even if Fox’s comment here is reasonable (the kicking situation criticism is, “worst offseason” maybe not so much, although maybe that’s better if you combine it with Woody’s previously-stated point about Fangio’s departure), his less-than-stellar personal record on the kicking front and his role in creating the current problem is going to come to mind for viewers. As Jon Gruden illustrated last season, criticisms of an issue you created don’t always go over well.