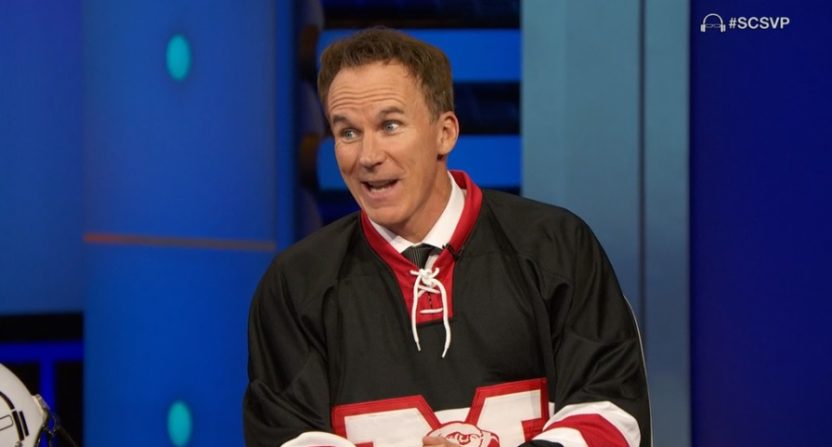 Days after ESPN suspended Donovan McNabb and Eric Davis amid claims they sexually harassed a female employee while at NFL Network, the network is facing a new set of allegations.

The Boston Globe on Thursday published a lengthy report on sexual harassment at ESPN, including accusations against big-name employees such as anchor John Buccigross and fantasy sports writer Matthew Berry.

Per The Globe, current and former ESPN employees say the company had an “entrenched locker-room culture, where men have made unwanted sexual propositions to female colleagues, given unsolicited shoulder rubs, and openly rated women on their looks, and, in at least one case, sent shirtless selfies.” In addition to alleged sexual harassment, ESPN is also accused of demoting or otherwise punishing women who miss time due to pregnancy.

Some of the most specific accusations in the Globe‘s piece come from Adrienne Lawrence, who joined ESPN in 2015 on a fellowship and this past summer filed a complaint against the network with the Connecticut Commission on Human Rights and Opportunities. Lawrence alleges that Buccigross sent her unwanted shirtless photos and that ESPN retaliated against her when she complained.

Lawrence accused John Buccigross, a longtime SportsCenter anchor who she viewed as a mentor, of sending unsolicited shirtless photographs of himself and calling her “dollface,” “#dreamgirl,” and “#longlegs” in messages from 2016 reviewed by the Globe. Lawrence said she tried to remain cordial in the e-mails but at one point responded: “You need to wear clothes, sir.”

When rumors spread that the two were in a relationship, Lawrence repeatedly complained to company officials and was advised by a supervisor to drop the matter, according to the complaint.

Lawrence said ESPN retaliated against her by reducing her on-air shifts and ultimately denying her a permanent position. The other fellow, a male, received a job offer. The Globe interviewed three former employees who Lawrence had confided in at the time about her treatment and confirmed her account.

Per The Globe, Buccigross admitted to sending Lawrence shirtless photo but denied spreading rumors and said Lawrence remained friendly with him even after the photos. ESPN told The Globe it conducted a “thorough investigation” and found no wrongdoing on the part of Buccigross.

The allegation against Berry comes from actress, model and writer Jenn Sterger, who previously described sexual harassment at ESPN in a tweet sent in October. Sterger reportedly claims that Berry led her to a strip club without informing her where they were going and that he later made inappropriate sexual comments toward her.

Today, Berry said visiting the strip club “was not a smart decision and I regret going.” He described a photo from that work trip in which he is pointing at Sterger’s breasts as “personally embarrassing and I did not mean any offense.”

Sterger said she had another uncomfortable encounter with Berry two years later, claiming that Berry made sexual comments when she visited ESPN to talk about a potential job opportunity — an accusation that Berry denies. When asked whether he had ever been suspended or disciplined for inappropriate behavior, Berry said, “I was talked to once about an alleged issue in 2007, which was ultimately resolved.”

The other main revelation in The Globe’s story concerned ESPN’s treatment of pregnant women. Former SportsCenter anchor Sara Walsh, who was laid off in April, reportedly had a miscarriage on air (as she has previously described) because she felt if she took a day off she would risk upsetting superiors such as SportsCenter vice president Mike McQuade.

Shortly after Mike McQuade took over as vice president of SportsCenter in 2014, he questioned Walsh’s commitment because she also worked for The Fantasy Show during the football season. Walsh, who had recently signed a multi-year contract and helped host an opening for ESPN’s new digital center, was shocked that her new boss was raising concerns, according to three former employees briefed on the matter at the time.

Walsh was so worried about her job that she decided not to call in sick when she started bleeding from a miscarriage during a work trip to Alabama. Instead, she went to the studio and anchored the show. She described the on-air miscarriage in an Instagram post on Mother’s Day this past year, but Walsh told the Globe she could not comment because she is still under contract.

McQuade told The Globe that any conversation with Walsh about The Fantasy Show “should not have given Sara any concern about her job.”

Other former ESPN employees, including Jade McCarthy and Lindsay Czarniak, said they felt they were punished for getting pregnant. McCarthy was laid off in April. Czarniak walked away from ESPN this summer when her contract expired, apparently because she was unhappy with how the company treated her.

Walsh’s experience was not isolated, according to other women at ESPN. Anchor Jade McCarthy said she lost on-air opportunities after getting pregnant. McCarthy said she was moved off weekend SportsCenter shows when she returned from her first pregnancy at ESPN and was laid off this past April when she was nearly eight months pregnant. Lindsay Czarniak — one of the few female solo SportsCenter anchors in 2016 — said she chose to walk away after the company offered her a different job at a significant pay cut when she returned from maternity leave this year.

In a statement to The Globe, an ESPN spokeswoman said the company works hard “to maintain a respectful and inclusive culture” but that such a goal was “always a work in progress.”

UPDATE: In a statement sent to Awful Announcing, an ESPN spokeswoman said Lawrence’s claims were “entirely without merit” and that the network will “vigorously defend its position.”

“We conducted a thorough investigation and found these claims to be entirely without merit. Ms. Lawrence was hired into a two-year talent development program and was told that her contract would not be renewed at the conclusion of the training program.  At that same time, ESPN also told 100 other talent with substantially more experience, that their contracts would not be renewed.  The company will vigorously defend its position and we are confident we will prevail in court.”