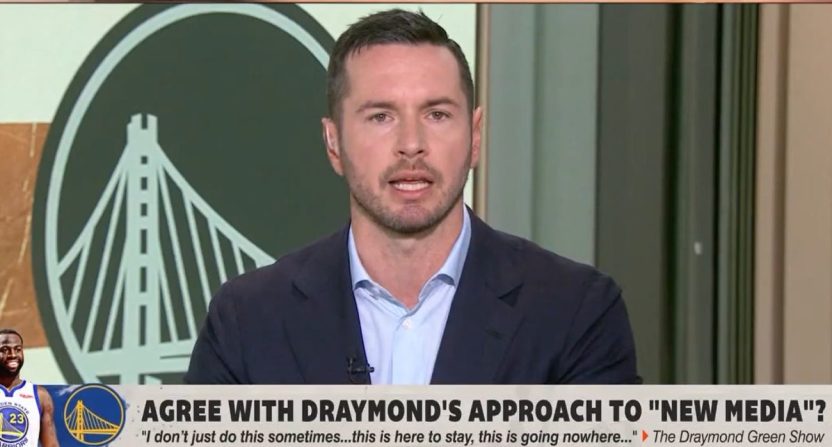 Recent and current NBA players are attempting to outline a very specific definition of what they believe the media is.

That’s kind of what they’re doing by pushing the “new media” vs old media narrative, claiming to know who is in what category and who fails to live up to their definition of media at all. And earlier this week, on First Take, Redick railed against aggregate media websites.

“Aggregate media is – ClutchPoints is an awful site, it’s an awful platform,” Redick began to explain. “ClutchPoints for instance, they take something that I say or that Kevin Durant says – like there’s out of context and then there’s out of context. That then goes viral on 50-100 aggregate sites. It’s not real media, but it’s part of media now. Aggregate media. Bleacher Report started it 12, 15 years ago.”

Check me out, aggregating Redick’s complaints about aggregate media. Sounds like the basis for an episode of Seinfeld.

Redick’s larger point is that today’s generation of athletes are forced to deal with a different type of media pressure. Which is fair. It’s probably for the better that Michael Jordan didn’t play during a time when every person was walking around with a camera and the ability to immediately broadcast videos on social media without consent.

But at the same time, today’s generation of athletes also relish the opportunity to force their way into the media, by launching their own podcast, production company, or even just by using Twitter to call out Stephen A. Smith and Skip Bayless.

I get it, Redick doesn’t want to be misquoted or misrepresented and I can appreciate his ability to call out the media game as he plays it. But there are so many platforms, shows and podcasts that it’s impossible to for the consumer to watch and listen everything. Aggregate media serves as a “what you may have missed” tool for the audience which the “new media” benefits from.

Thousands of people talk about Redick’s battles with Smith on First Take, or Green’s rants against traditional media from his podcast. But how much of that surrounding chatter derived from First Take’s live TV audience or Green’s direct podcast listeners, as opposed to people who learned about them through aggregate media?

New media vs old media vs aggregate media vs the blogger in their parents’ basement. We’re all in this together.