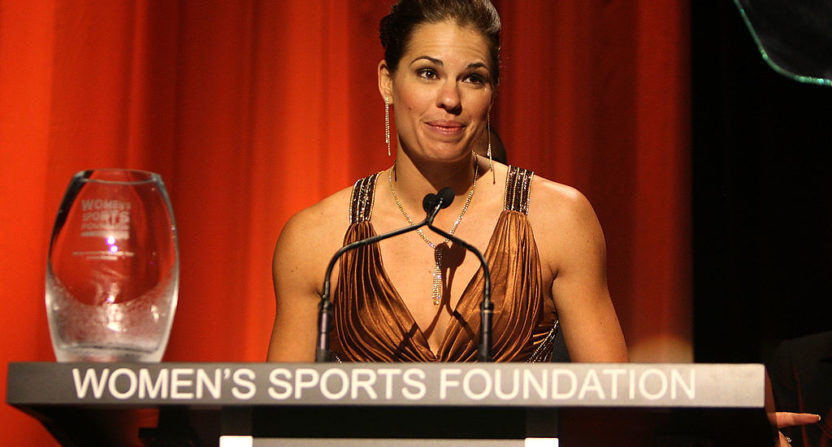 There are always plenty of people willing to lob criticism at ESPN Sunday Night Baseball analyst Jessica Mendoza, much of which is for her gender. A Cardinals’ fansite even ran a poll blasting female announcers during Monday’s home run derby (which Mendoza was part of the call for), with the most favorable option being “Eh,” and although they were promptly Ratio’d, those anti-female announcer sentiments are certainly shared elsewhere (as any sort of glance at Mendoza’s mentions illustrates). So why does Mendoza do a job where she has to face that kind of vitriol regularly? Britni De La Cretaz spent a day following Mendoza before a broadcast for a Teen Vogue profile that was published Monday, and Mendoza told De La Cretaz she broadcasts so she can break barriers for others:

The 36-year-old seems both awed that this is her life and this is the job she gets paid to do, and resolute that she was meant to be the woman to break barriers for all the young girls and women who will come after her. “I really believe that’s why I need to be in this position, because… if I were to talk to a young girl right now that’s like, ‘You’re doing this to hopefully create an opportunity for me to be in this position,’ I would tell her, ‘I’m doing everything I can. I am going to fight for you, I’m going to work my butt off for you.’ I want these girls to know that I’m never going to take this for granted,” she says.

Being a mentor for girls and women in sports is an issue Mendoza is passionate about. She’s been heavily involved in the Women’s Sports Foundation since she was 20 years old. “The network [of women] that was created and the influence it had on me, literally is why I’m doing what I’m doing now,” she says. She wants to pay that forward, and help have an influence on young women at the time in their lives when they’re most vulnerable to outside pressures. She cites the profound effect that sports had on her confidence and identity and says she wants to help girls choose the camaraderie and physical fitness of sports over drugs or other negative choices.

That’s an interesting stance, and it helps explain why she’d stick with a job that leads to so much negativity being lobbed her way. There’s plenty of positive praise for Mendoza out there as well, and ESPN seems quite happy with the job she’s doing so far, so it certainly does seem plausible that she (alongside other female ESPN analysts and commentators, such as Doris Burke and Beth Mowins) will be blazing a trail for others to follow. And that seems like good motivation to keep going. Her work with the Women’s Sports Foundation (she’s seen above presenting at their 2008 gala in New York City) undoubtedly helps, too.

There are a lot of other notable details in there, on the prep work that Mendoza does, on her feelings on advanced stats (learn them and sometimes express them, but not in a jargony way), and on her approach to talking to players (usually in one-on-ones out on the field rather than in media scrums in the clubhouse; that’s not an opportunity everyone gets, but if she has it, that seems like an excellent way to do it). There’s also an interesting anecdote about her clothes, and how she had to adjust to the “traditionally feminine clothing” desired for this job. Overall, the piece illustrates how Mendoza’s fitting in and improving as a broadcaster, and it’s a good look behind the scenes at what goes into her days. It also demonstrates the motivation she has to persevere with this.