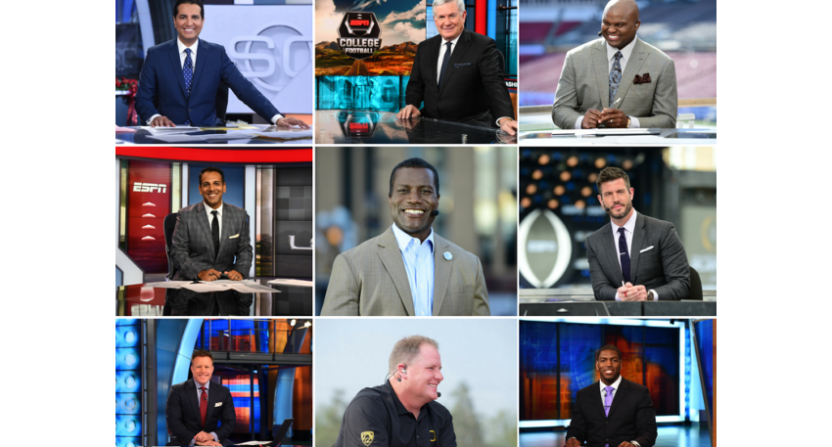 The ABC, ESPN and ESPN2 studio coverage of college football will look dramatically different this year. On ABC’s Saturday coverage, Kevin Negandhi will be taking over the studio host role (Stan Verrett held it last year after long-time host John Saunders passed away just before the season), with Booger McFarland joining him as an analyst (replacing the laid-off Mark May) and Mack Brown retaining his analyst role. On ESPN’s studio coverage (Thursdays, Fridays and Saturdays), host Adnan Virk and analyst Joey Galloway return, but Jesse Palmer is joining them (replacing the laid-off Danny Kanell). And over on ESPN2 on Saturdays, Chris Cotter will host with analysts Chip Kelly and Jonathan Vilma. Let’s break down what this means for each channel.

ESPN: This may be the biggest one, as this studio show airs on three different days, and it has a very high-profile addition in Palmer (and a high-profile departure in Kanell). Virk, Galloway and Kanell had solid chemistry, bringing both serious insight and an ability to have fun with each other (consider the back-and-forth over Kanell’s turtlenecks for an example of the latter), so it will be interesting to see how Palmer slides in. Both are former quarterbacks who played in the state of Florida (FSU for Kanell, UF for Florida) with experience as a game analyst. Kanell also had a hosting background (from UNITE and Russillo and Kanell), while Palmer has called Thursday night games for ESPN for almost a decade, SEC Network games for the past three years, and also appeared on the ABC studio show for a long while and hosted ESPNU’s Palmer and Pollack.

We’ll see how Palmer transitions to this particular studio. He does have experience with other shows, such as Good Morning America and Spring Baking Championship (to say nothing of his stint as The Bachelor back in 2004), and he does have that studio experience, but this will be a different group for him to work with. He does bring a quarterback’s perspective, though, and Virk has proved adept at working with a variety of analysts. He and Palmer are both from Ontario, too, so perhaps they’ll be able to crack some Canadian jokes on-air or behind the scenes.

ABC: Negandhi gets a big promotion here, and he has some big shoes to fill. Saunders made a massive mark in this role, and Verrett did a capable job of filling in last year. Neghandi’s currently less well-known than those two to a general audience, but he has an impressive ESPN resume, including regular work hosting morning editions of SportsCenter, work on Outside The Lines, Baseball Tonight, College Football Live and more, and special event hosting duties at events like the Women’s Final Four and the Scripps National Spelling Bee. He’ll be hosting morning SportsCenters focused on pro and college football on Fridays and Sundays during the season as well, and told Philly.com’s Rob Tornoe he’s thrilled to get the chance to cover the sport he’s most passionate about more regularly:

But nothing compares to being able to cover college football and the NFL. In addition to his role on ABC, Neghandi will anchor the Friday and Sunday morning editions of SportsCenter during the football season, when his plate will be overflowing with news in his favorite sport.

“I’m beyond excited,” Negandhi said. “Man, I am so lucky to do what I do because I’m so passionate about these sports.”

Negandhi also had a cool story about how he met Saunders while studying at Temple:

Negandhi first met Saunders while he was a student at the North Philadelphia university. Back then, the aspiring journalist hounded national broadcasters and reporters who came to cover Temple basketball games at McGonigle Hall. When Negandhi approached Sanders one night, less than half an hour before a broadcast, he was surprised at how willing the ESPN announcer was to offer advice.

“John didn’t know me, yet he spent 10 to 15 minutes giving me his background. He didn’t have to do that, but he did,” Negandhi said. He said that discussion opened his eyes to the different journeys broadcasters took to end up at the network.

Over the years, Negandhi got to know Saunders; his wife, Wanda; and their two daughters, Aleah and Jenna. Last May, Negandhi was asked to take over another role previously held by Saunders: hosting the annual Dick Vitale Gala, which benefits The V Foundation for Cancer Research that Saunders created.

“I want to make Wanda and the girls proud,” Negandhi said.

The other interesting move on the ESPN set is McFarland’s promotion into Mark May’s shoes. McFarland has shown promise at times as a SEC Network analyst, but he’s also been dogmatic and hot-takey about certain subjects, especially those involving alma mater LSU. Of course, May had tons of critics (for good reason), and McFarland is probably a step up. But it will be worth watching how he fits in with Negandhi and Brown.
ESPN2: This one could be worth watching as well, especially for Kelly’s presence. Vilma was decent as a ESPN analyst last year on several platforms, and Cotter’s been with ESPN since 2012 and has shown plenty of hosting prowess, particularly on College Football Live, but it’s Kelly that’s the really interesting name. Giving him a featured college football role makes sense, especially considering the tremendous success he found at that level, and he may be able to bring a lot of Xs and Os insight (and probably will provide more of that than other former coaches like Brown who tend to focus more on the big picture). Kelly will also appear on SportsCenter Fridays and Sundays, offering CFB and NFL insight. Of course, being a successful coach doesn’t necessarily make you a good analyst, and it will be interesting to see how well Kelly’s able to relay his knowledge and offer perspective that matters to the viewers.
Overall, this marks a pretty big shakeup for ESPN’s college football coverage. There are lots of high-profile changes here, especially with Negandhi in to a regular role and Palmer shifting from the booth to the studio, and each of these three studio shows will offer something different. We’ll see how it all plays out, and which of these studio shows winds up being particularly worth paying attention to.
Correction: This post initially didn’t include Palmer’s previous studio experience on ABC.
[ESPN Media Zone]