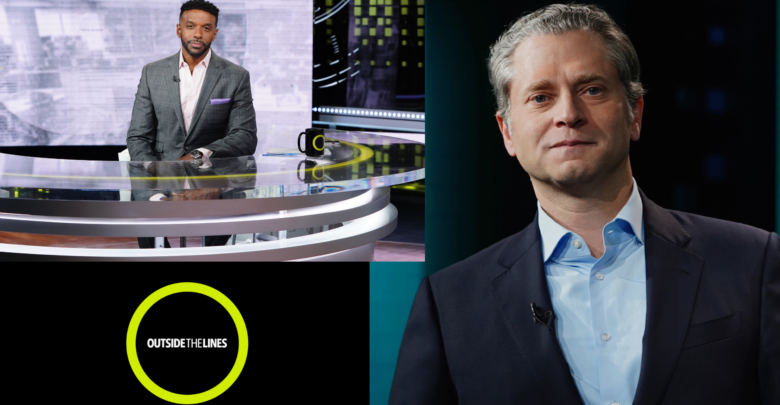 Back in October, ESPN announced that they were cancelling the daily version of Outside The Lines as a standalone studio show (it had aired from 1-1:30 p.m. Eastern) as of Dec. 20, but “expanding” it thanks to daily OTL-branded segments on SportsCenter and ESPN.com, plus an hour-long weekend show Saturdays at 9 a.m. Eastern. ESPN began the daily OTL-branded segments (primarily hosted by legal analyst, reporter and host Ryan Smith, seen at left above) Monday, and the hour-long show is being launched Saturday; it will be hosted by Jeremy Schaap (seen at right above). Ahead of that launch, Schaap and other OTL figures spoke to Ben Strauss of The Washington Post, and some quotes from OTL executive producer Andy Tennant about how Schaap is stepping into the shoes of recently-retired OTL host Bob Ley particularly stand out there:

“When Jeremy is on the screen, you know the story is going to be worth your time.”

“Bob’s name was on the show. But Jeremy’s the closest thing to that. He’s being asked to anchor ESPN’s journalism.”

Schaap has done a great job with a lot of remarkable stories across his 25 years at ESPN, and he has succeeded in a lot of different roles, from hosting E:60 (including a Sunday morning edition with Ley) to co-directing a 30 for 30. There’s plenty of reason to believe that he’ll do good things with the Saturday morning OTL. And he makes some valid points to Strauss; there are some advantages of an hour-long, once-a-week show when it comes to longer features or panel discussions. And the new weekly OTL will indeed be anchoring ESPN’s journalism; a Schaap-hosted show that’s going to cover serious stories in depth (he tells Strauss “Human rights, abuse of athletes, these are the stories that we want to do”) is far more notable on the journalism side than anything else on ESPN’s TV schedule. But it’s significant that the “anchor” of those journalistic efforts is a show that now has an airslot of Saturdays at 9 a.m. Eastern (6 a.m. on the West Coast), and one that’s probably getting bumped to ESPN2 (or worse) when College GameDay returns next fall.

None of that is a shot at the people involved with the weekly version Outside The Lines; there are a ton of talented people involved with this show, and they’re going to continue to try and make it the best product they can. They’re not the ones picking its timeslot. And there still will be chances for people to watch, even given that brutal time; DVRs exist, and the programming here will probably be available through the ESPN app as well. But reducing OTL’s linear stand-alone airings from a daily half-hour show to a weekly hour at the crack of dawn on Saturday mornings is unquestionably a step down for the show’s profile.

What about those daily segments? Well, while ESPN executive vice president and executive editor/event & studio production Norby Williamson claimed to John Ourand of Sports Business Journal in October that “We’re taking away ‘OTL’s’ linear half-hour daily presence and expanding it. If you compare that 30 minute weekday show from 1-1:30 to the amount of impressions that I’m going to get, we’re going to impact more people.” But that’s one of those claims that only works from a certain point of view.

Yes, it’s possible there could be more eyeballs on each of these daily OTL segments than there used to be on the standalone show, especially if they wind up re-aired across ESPN’s countless editions of SportsCenter (the most recent release only mentions them within the noon ET edition of SportsCenter, which has expanded its gaping maw to 90 minutes by swallowing up OTL’s old timeslot, but it’s possible there could be some re-airs for particularly prominent segments). And these will probably get some attention online as well, at least if ESPN finds a way to promote them; Friday’s segment (part of a series on athletes and social media) didn’t appear anywhere on the ESPN home page by Friday afternoon, and an “Outside The Lines” search on that page brought up this show page, where the last posted video was from December.

For the moment, the main way to find the daily segments if you’re not watching the gargantuan 90-minute noon SportsCenter appears to be through the OTL Twitter page. That’s not bad, given that it has 66,000 followers, but it’s far from ESPN’s biggest platform. And if Williamson is actually serious about “the amount of impressions I’m going to get” (rather than just using that as a “I’m not reducing OTL, I’m expanding it!”) excuse, he might want to get someone to provide some promotion for these segments on ESPN’s homepage.

And there’s something to be said for the lessened amount of airtime serious OTL-branded journalism now receives on ESPN. Taking away the daily 30-minute show and replacing it with segments that seem to mostly run one to five minutes (going by the tweets, at least; as mentioned above, there doesn’t seem to be a way to easily find those segments on ESPN’s home page) is, at best, an 83 percent reduction in the amount of daily airtime for something under the OTL brand. Even if you give them five minutes a day, that’s 25 minutes; even with the hour-long Saturday show, that’s still only 56 percent of the two and a half hours OTL used to get weekly with a half-hour daily show. So they’re really going to have to do numbers to increase those overall “impressions” with so much less content. There have been some good daily segments so far, including Schaap’s interview with new Ole Miss coach Lane Kiffin (part of that is available here), but they’re still a major dropoff in the amount of OTL content available daily.

And while the old daily OTL wasn’t posting huge numbers, it still mattered. It was a place where viewers could depend upon ESPN presenting serious journalism and serious conversations, not the embrace debate of First Take or the video-focused approach Williamson has turned to with SportsCenter. The old daily OTL was truly an “anchor” of ESPN’s journalism efforts, especially after it went back to the main network (yes, there’s been a bunch of burying OTL before, although that was on ESPN2 rather than into “daily segments”) and it provided people who cared about the serious sports discussion that happened there one place on the ESPN programming schedule they could turn to. That’s no longer the case; sure, they can tune into the noon SportsCenter in hopes of seeing five minutes of OTL somewhere in that 90 minutes, but that’s a tougher sell. So a lot of the new “impressions” may just be from the people who were watching the noon SC anyways, and they may not be thrilled to have more serious discussion taking over part of that show.

Of course, the new OTL is still going to matter, both with its daily segments and with the weekend show. It’s positive that there still are daily OTL segments on ESPN, even if the amount of OTL content has dropped significantly, and the weekend show sounds like it will be quite promising from the content side. (And it may well be worth recording for those who don’t want to crawl out of bed at times ranging from 9 a.m. to 6 a.m. on Saturday in the continental U.S.) Schaap is a great choice to host this, and an hour-long format provides some solid options for them. Schaap’s comments to Strauss also make it clear that he isn’t being asked to preserve league relationships and that OTL will still be doing hard-hitting stories; that’s very important, considering the role OTL has played in covering key NFL stories on fronts like concussions and domestic violence.

And it’s also worth noting that OTL’s TV presence is not the sum total of ESPN’s journalism. ESPN employs a lot of talented journalists, and many important pieces run on ESPN.com, so it’s not all about the TV side. But OTL does stand out as the “anchor” there, and it’s notable that the “anchor” of ESPN’s TV journalism lineup is shifting from a daily show each afternoon to a once-a-week show Saturdays at 9 a.m. Eastern. That appears to say a fair bit about how much emphasis ESPN places on it, and that perhaps continues their focus on swinging coverage back to the field.