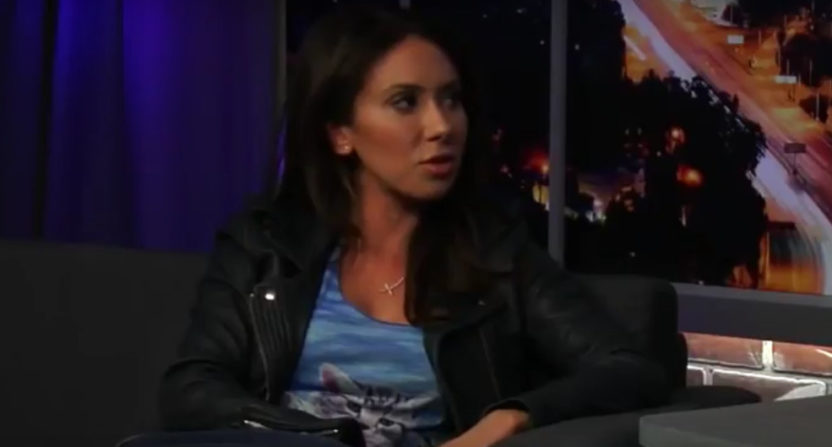 Jenn Sterger’s allegations that she was sexually harassed multiple times by an unnamed ESPN employee have spawned further controversy, especially as she went on to point out past comments ESPN’s Sam Ponder and Sarah Spain (prominent critics of the ESPN-Barstool Van Talk deal, which ESPN president John Skipper cancelled Monday) made about her during the 2010 investigation after Deadspin published her allegations that Brett Favre sent her sexually explicit voicemails and texts. (This led to the NFL eventually fining Favre $50,000 for “failure to cooperate with the investigation in a forthcoming manner.”)

Here are Ponder’s tweets on Sterger:

Bro: What does Jen Sterger look like? Me: She has brown hair and big boobs. Dad: So does Rosie O'Donnell. #Goodpoint

During the NFLs investigation? Cool. https://t.co/3KfCUTtsuB

But during an investigation into harassment and bullying. Who does that?

And here’s Sterger’s back-and-forth with Spain (who did apologize, but said she didn’t remember the comments in question):

As she has me. But I wasn’t going to name names.

You attacked me at the peak of the Favre reporting saying I was out for $$ & I “looked the way I did.” Trust me that stuff I don’t forget.

Really hurt me because I considered you a friend because you had always been nice to me prior to that.

You did. You also unfollowed me. It was right when you were getting started with espnW.

But wait Sarah Spain said it doesn't sound like her to victim shame so she prob didn't do it. ? pic.twitter.com/vEDHuPiDv5

The bottom line is this: If Brett Favre truly harassed Jenn Sterger and his advances were unwanted and unreciprocated, then a measly $50,000 fine doesn’t cut it. Only Favre and Sterger know what really happened, but I’d bet the situation wasn’t nearly as one-sided as she purports it to be. I just don’t see how Favre could ask her out, get denied and decide the next logical step would be to text her the contents of his Wranglers. There’s a disconnect there and I’d imagine some gaps in the findings resulted in the ruling of insufficient evidence. Whatever the league decided — fine, suspension, no discipline whatsoever — it should have acted on it a long time ago. Waiting until the Vikings’ last game of the year, when Favre’s retirement presser has been all but scheduled, reveals an unfair and inappropriate bias to ol’ No. 4 and sets a dangerous precedent for future cases.

Portnoy’s involvement here comes after he complained about people digging up old Barstool posts but not doing that for others, and after he said Spain’s criticism of Barstool was because she wanted her own show. Here are his comments on those fronts from Monday (you can read a transcription of his comments in their entirety at that link):

“Sam Ponder, I’m not even really mad about her tweet. That was a grudge move. We attacked her. She waited for three years to drop revenge on our heads the night before. And she got accomplished what she wanted to get accomplished. She got the show cancelled. From what we heard, there was a mini-uprising. When I say mini, I guess like 95 percent of ESPN employees actually like Barstool. And there’s a small minority, either for real reasons, they want their own show, shoutout Sarah Spain, whatever the case may be, there were people who didn’t like the show. And with anything we do with Barstool, the silent, the vocal, minority stamps their feet, goes loud, loud, loud.”

…“Like, three years ago, I guess I called Sam Ponder a word that in hindsight I wish I took back so this didn’t happen. But I don’t take back the riff. I don’t take back any of it. By the way, my legs are going to die on this stool. But that’s how we act. For 15 years, people who have followed this company know, we just talk, shoot the shit, try to be funny, don’t let PC America get the best of us. And we’ll continue to do that.”

…“I haven’t apologized for that rant. I wish I didn’t use the word, because three years ago it was a very different social climate, and we’re ranting on something that I thought was fair.”

What others said years ago is certainly starting to get more notice, though. Barstool writers went at FanSided co-founder Adam Best over his past tweets last week after he criticized their outlet, leading to him eventually apologizing, and the scrutiny on Ponder and Spain’s past Sterger comments suggests we may see more excavations of long-ago tweets.

But, beyond the mentions of Ponder and Spain’s past comments, it’s also notable what else Sterger tweeted about her sexual harassment allegations and ESPN’s response. Here are some of the other tweets she sent Tuesday:

Here is ESPN's response to what @jennifersterger tweeted on her feed: pic.twitter.com/bWoYDtRRq7

Their investigation can’t be going that well if numerous other women have DMed me their stories & are asking to confirm names. https://t.co/ne1b18tnQ7

I don’t want to “do interviews” or your podcast or any of that nonsense. I would like for people to stop protecting people in power that

A woman can be a repeat victim of this over & over again, through no fault of her own… especially in certain industries. When you don’t

Get believed the first time then you realize no one gives a shit & stop reporting. & start putting the blame on yourself. I must be “bad.”

If you believe you’re supposed to be treated this way because you don’t see anyone do anything about it.. you give up.

Sterger has definitely started a conversation about sexual harassment at ESPN, and in more recent times than the incidents detailed in the books by Mike Freeman and Jim Miller and Tom Shales. And she’s also kicked off some examination of past comments from the likes of Ponder and Spain. We’ll see where this goes from here.