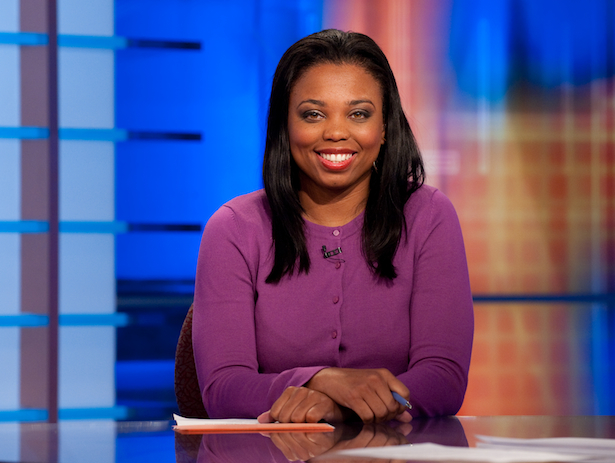 A week before Donald Trump took on the NFL and players taking a knee during the national anthem, the President of the United States was busy feuding with ESPN and 6 PM SportsCenter co-host Jemele Hill. I know, it seems like that happened months ago, right?

Hill called Trump a white supremacist on Twitter, drawing the ire of the White House and a public reprimand from ESPN. However, Hill found widespread support from fellow critics of the President and many of her ESPN colleagues.

Hill has penned a column at The Undefeated speaking out in longform about her tweets, the controversy that ensued, and the inescapable blurred lines between sports and politics that has dominated the headlines this fall.

First, Hill talked about meeting with ESPN President John Skipper and her regret that they were immediately grabbed by the “ESPN is liberal” narrative. While that narrative has been gaining steam over the past year or more (maybe ever since Curt Schilling was axed), it has exploded in the conservative media and been capitalized upon by the likes of Clay Travis. She also doubled down on her criticism of the President’s behavior and said she will continue to stand up for those who feel threatened by racism and white supremacy.

Since my tweets criticizing President Donald Trump exploded into a national story, the most difficult part for me has been watching ESPN become a punching bag and seeing a dumb narrative kept alive about the company’s political leanings.

If we’re keeping it all the way real, that narrative is often pushed by the folks in the media who benefit most from that notion and all the attention that criticism of ESPN brings.

But this isn’t about that. It’s simply indicative of just how complex things get for people in OUR position — especially if you’re a woman and a person of color.

I can’t pretend as if this isn’t a challenging time in our country’s history. As a career journalist, I can’t pretend that I don’t see what’s happening in our world.

I also can’t pretend as if the tone and behavior of this presidential administration is normal. And I certainly can’t pretend that racism and white supremacy aren’t real and that marginalized people don’t feel threatened and vulnerable, myself included, on a daily basis.

Yes, my job is to deliver sports commentary and news. But when do my duties to the job end and my rights as a person begin?

And yet, Hill also expressed in reflecting that Twitter wasn’t the best platform to discuss her views. That’s no surprise to even the most casual users of the social media service. “Twitter also isn’t a great place to have nuanced, complicated discussions” might be one of the truest statements ever written, even with Twitter expanding its character limit to 280 letters.

Still, Twitter wasn’t the place to vent my frustrations because, fair or not, people can’t or won’t separate who I am on Twitter from the person who co-hosts the 6 p.m. SportsCenter. Twitter also isn’t a great place to have nuanced, complicated discussions, especially when it involves race. Warriors player Kevin Durant and I probably need to take some classes about how to exercise better self-control on Twitter. Lesson learned.

Also, let me be clear about something else: My criticisms of the president were never about politics. In my eyes, they were about right and wrong. I love this country. If I didn’t, I wouldn’t want it to be better.

The events of last weekend showed that the intersection of sports and politics is the most pronounced we’ve seen in decades. Sports always has been intertwined with social change in America. But let’s not forget some of the athletes who instigated that change — Jesse Owens, Wilma Rudolph, Muhammad Ali, Curt Flood and Jackie Robinson — only became beloved icons once history proved them to be right.

Therein lies one of the challenges for ESPN as a whole and for its reporters and commentators. Where is the separation between their personal views on Twitter and what we see on ESPN? The truth is that there isn’t a separation, especially in this politically charged climate. It’s impossible to compartmentalize someone on Twitter from someone on television and think that they could be viewed as two different people. Whether you work for ESPN or not, that’s true for anyone who works in media or anywhere else in the public eye.

But Hill is also right in looking back at where sports took a leading role in advocating for social change. While the platform could have been changed or the message delivered in a different way, Hill is standing by her belief in being on the right side of history and not by saying or doing what may be universally popular in the here and now.