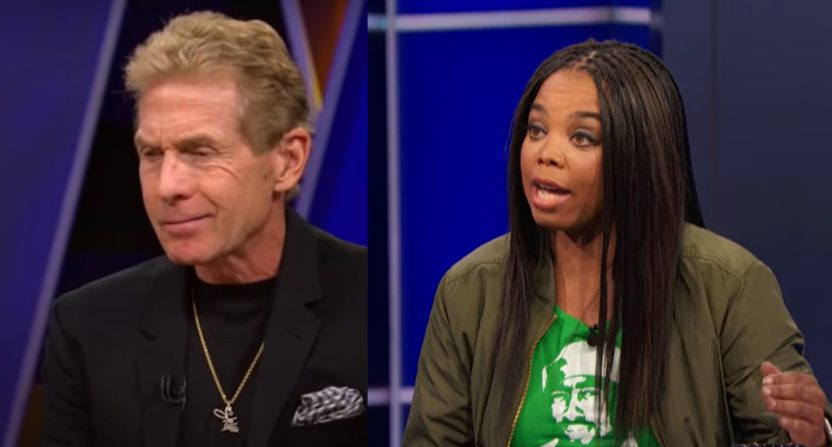 While it’s already difficult to write the story of ESPN without mentioning Jemele Hill, the veteran journalist was almost part of a decision that would have drastically altered the current landscape of the network.

This week, Hill joined Richard Deitsch’s latest sports media podcast episode to discuss her newly released memoir. During their wide-ranging interview, Deitsch asked Hill about an interesting piece from her book, where the former ESPN employee discussed the possibility of joining First Take as a full-time contributor earlier in her tenure at the network. According to Hill, she was briefly considered for First Take’s moderator role and when that didn’t seem like a good fit, she was later in the running to be Skip Bayless’ permanent debate partner, which eventually went to Stephen A. Smith.

“Self-awareness is an important trait to have,” Hill told Deitsch around the 55-minute mark of the above podcast. “Especially in TV and it was very clear to most of us who were in the debate rotation at that point that Stephen A. was the perfect partner for [Skip].”

“When they were on TV together there was a certain bombastic magic that happened and the audience response was always high,” Hill admitted of the chemistry between Smith and Bayless. “And while certainly, the audience response, I felt was pretty decent when I was on with Skip, [Stephen A. Smith] felt like what ultimately made the most sense for the show and the partnership, they were longtime friends…I guess you can say, to some degree, I was the runner-up.”

Smith has often touted his inherent ability to disagree with Bayless thanks to naturally having differences of opinion on everything. While Hill may have similarly been able to regularly oppose Bayless, there is no one in sports media who can consistently match Smith’s energy level and desire to tirelessly debate every topic as if it’s his last.

But there’s no question that if Hill was selected as Bayless’ permanent debate partner, the current landscape of ESPN would be different. Smith may never have received the opportunity to join First Take on a full-time basis, the show that he currently orchestrates and makes him the face of ESPN. Maybe Bayless stays at ESPN and Smith would have started a competing debate show at FS1. Maybe ESPN offers stronger support of Hill in the wake of her Donald Trump tweet knowing that she’s the face of their premier daytime studio show.

Earlier this year, when Smith and Bayless had a brief argument over how they were paired on First Take, Hill praised both personalities, specifically citing Bayless for teaching her how to make great television.

“I give Skip a ton of credit because he was the one of the people who taught me how to do great television,” Hill tweeted. “I’ve always given him credit for that.”

While Hill may not have been able to match Smith’s energy, she and Bayless certainly could have created a noteworthy debate show with the tendency to regularly go viral on social media. But it’s hard to predict how long their run would have lasted because it takes a unique personality to never get sick of arguing about sports with unwavering enthusiasm. Maybe that’s where Hill’s “self-awareness” came into play.