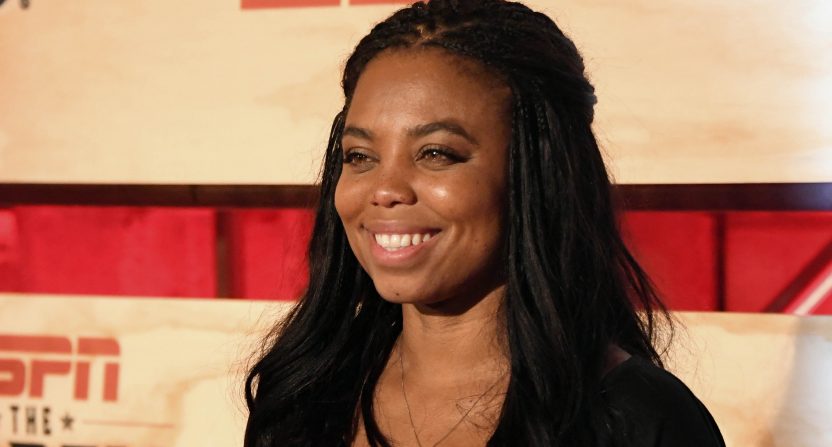 Nearly four years after her departure from ESPN, Jemele Hill is opening up some more about her tumultuous later years at the company.

In an interview Thursday with former ESPN coworker Kenny Mayne on his Hey Mayne podcast, Hill discussed her time on SportsCenter, which quickly went awry.

Specifically, Hill said she “wasn’t a good fit for the SportsCenter culture,” and that it was “the worst job I had at ESPN.”

Hill, 46, joined ESPN as a columnist in 2006. She began co-hosting the “His & Hers” podcast with Michael Smith in 2011. The popular podcast went on to become a ESPN2 show in 2013. Hill and Smith were promoted to evening anchors of “SportsCenter” in February 2017.

Over the show’s first few months, Hill revealed that coworkers urged her and cohost Michael Smith to not let ESPN management change them, with issues related to the show’s creative direction popping up.

After landing the coveted role, Hill said many “seasoned ‘SportsCenter’ anchors,” including Mayne, Mike Greenberg, and Scott Van Pelt, all gave her and Smith the same advice: “Don’t let them change you.”

“Giving us this advice there’s an implicit warning that’s in there, too. That became really evident very quickly,” Hill said. “So we were already having some creative issues with (management) before Donald Trump… Once that happened and my tweet and all the fallout and the controversy, that just sped up something that was already I think in process.”

Hill and Smith were announced as the new hosts of the 6 PM SportsCenter in October of 2016, officially taking over in February of 2017. In September of that year, Hill tweeted that President Trump was a white supremacist, and the powder keg exploded. She avoided a suspension over that tweet, but was handed a two-week suspension in October for suggesting fans boycott sponsors of the Dallas Cowboys.

She also pushed back on the rampant claims about the network’s alleged left-wing bias.

“It’s a conservative culture at ESPN and so this idea that ESPN is being run by flower children is just a lie,” Hill said. “That’s not how it is. It’s the opposite, if anything. As you know all too well.”

She continued: “Once (critics) started seeing my face, Michael’s face become more prominent… then suddenly ESPN is too liberal because what they’re really trying to say is ‘Oh, y’all must be liberal-leaning because you got all these women and all these Black people who are suddenly on my TV everyday. So that means that this company has certainly given in to a brigade of liberalism.'”

Hill’s comments about the direction of the 6 PM SportsCenter also mirrors some of the comments made years ago.

Hill said she believes her authentic self “was too much for the ‘SportsCenter’ audience to handle.” She said ESPN was “only worried about the reaction.”

“It was no fun for me and so that’s why I left,” she said. “I didn’t get kicked off, I chose to leave because the experience wasn’t fun for me anymore.”

During the final months of him and Hill hosting SportsCenter, Michael Smith said the pair felt “muted,” which “frustrated the shit out of us.”

In January of 2018, Hill left her SportsCenter hosting gig for a role at ESPN’s The Undefeated. She left the company that September.