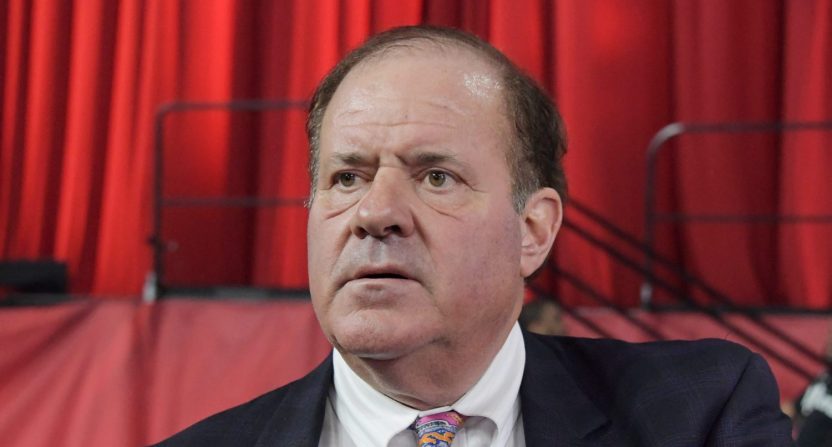 Long before she rankled Donald Trump by calling him a “white supremacist,” Jemele Hill drew the ire of ESPN’s Chris Berman for citing his thinning hair.

Hill joined Richard Deitsch’s latest sports media podcast episode to discuss her newly released memoir, and during their wide-ranging interview, a 2016 quarrel with Berman stemming from a comment about his dwindling hair follicles was broached.

“He called me and he left a voicemail for me,” Hill explains around the 57-minute mark of the above podcast. “And I never listened to the voicemail because as soon as I saw it was him that called…I was thinking to myself, ‘this can’t be good.’ Because I heard through the grapevine that he was not happy with those comments and it was from some of the producers on NFL Countdown, they told me that.”

Berman is an iconic ESPN TV host, which means we’ve all been able to see the various stages of hair quantity through his decades of work in front of a camera. From thick, to thin, to combover, to a more horseshoe-shaped pattern, Berman’s hair was never hidden by a toupee and was always on display. So when Hill cited Berman’s thinning hair and compared it to the way women are forced to present themselves on TV, it didn’t seem like she was breaking news, but according to her, Boomer was not pleased.

“I didn’t think I said anything that was really negative,” Hill recalled to Deitsch. “I was just pointing out what I thought to be obvious facts, the fact that nobody cares that Chris Berman is balding on television. I feel like the world can see, he’s thin.”

Hill said she didn’t want to listen to Berman’s voicemail, but she allowed her SportsCenter colleague at the time, Michael Smith to vet it. After Smith said ‘you don’t need to listen to this voicemail,’ Hill decided to save it without ever listening and “let bygones be bygones”

Berman, however, wasn’t as keen on letting bygones be bygones, and instead went to ESPN management demanding an apology from Hill. After she was approached by then ESPN VP of Content Production Marcia Keegan about apologizing, Hill asked her to listen to the voicemail first.

“After she listened to the voicemail, she called me back into her office and she apologized for asking me to do that,” Hill explained. “She said ‘you can consider the matter dropped.’”

According to Hill, her relationship with Berman was nonexistent after the voicemail and it wasn’t until the death of mutual friend John Saunders in 2016, followed by the tragic passing of Berman’s wife in 2017 that they started to move past the matter.

“As far as I was concerned, after those moments, John Saunders’ memorial, what happened with Chris Berman’s wife, to me, all the tension in our relationship was for me, forgiven and forgotten.”

While Hill says she never listened to the voicemail, she was at least aware of its contents enough to defend Berman from accusations that it was “racially disparaging.” In 2018, a lawsuit against ESPN from former employee Adrienne Lawrence over sexual harassment and a hostile workplace environment reportedly stated Berman left Hill a “threatening and racially disparaging” voicemail. Hill quickly defended Berman from the allegation, stating they “had a personal conflict,” that was handled with the “utmost professionalism.”

In her interview with Deitsch, Hill reiterated that she still has not listened to the voicemail. “Yes, I still have it and I don’t plan to listen to it.”