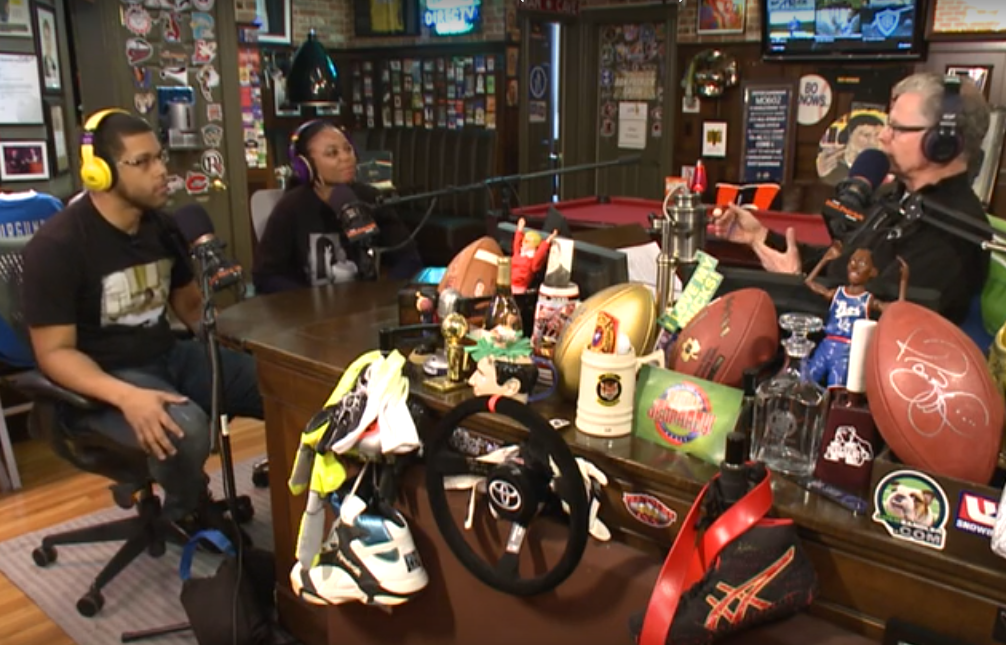 There’s been plenty of discussion of the forthcoming The Six six p.m. Eastern edition of SportsCenter, hosted by His and Hers alums Jemele Hill and Michael Smith, including the recent comments from ESPN SVP (SportsCenter and news) Rob King about its conversational tone and attempts to go beyond TV and its timeslot, but some of the most interesting comments yet came from Smith and Hill in an extensive interview on The Dan Patrick Show Friday. Here’s the full interview:

Things get interesting almost right from the start with a discussion about the name of the show and how that came about, including a reference to Drake and his love of using “The Six.” Here’s a transcript of that part:

Jemele Hill: “We just call it The Six.”

MS: “Can you believe that? How many years were they calling it ‘The Six’ internally in Bristol? Now we’re taking it publicly.

DP: “ESPN2, we called it The Deuce, we had an interoffice memo that says ‘Stop calling it The Deuce!’ And I said ‘Really?’ Because people still call it The Deuce.”

MS: “But unfortunately, we have people who think we’re copying Drake.”

JH: “Yeah, that were born in like 1998. And I’m just like ‘Hey, he did not invent the numeral six. Just so you know.’ Because “The Six” is referring to Toronto and the number six…

DP: “Are you sure Drake doesn’t think he invented the number six?”

JH: “I think his fans think he did! You know, I’m glad we got the opportunity to clear that up, because people will think that we’re biting.”

There’s then a notable discussion about Smith and Hill’s long-running podcast and on-air partnership and how they interact, including them mention how they’re always talking to each other about sports and their show and how to improve it.At 2:56, they talk about race after Patrick brings up Pardon The Interruption and the success Tony Kornheiser and Mike Wilbon have had with it:

JH: “It’s funny that you should say that, because, see, optically, Tony and Mike are different in the sense of ‘black guy, white guy.'”

JH: “Exactly! (laughs.) And to some degree, we sort of faced a certain stereotype, because we’re both sort of close in age, we’re both black, and even though there was a gender difference obviously, there was this kind of automatic assumption that we probably both thought the same. But we’re like-minded, but we think differently, if that makes sense.”

Patrick then discusses how that compares to his famed partnership with Keith Olbermann, and there’s a bit more discussion of the Hill and Smith partnership.  At 5:00, Smith discusses accidentally swearing twice on TV. They then talk about the decision to start the week after the Super Bowl instead of in the lead-up, which is about starting it from the studio rather than the road, and at 8:10, Patrick asks “How will you change?” That leads into quite a conversation about what to expect from this show, the difference between discussion and debate, and more.

JH: “For us, it won’t be a fundamental change, because we are bringing the essence of the same show to The Six. It won’t be a highlight-driven show, it will be a conversation-driven show.”

MS: “We were never debate.”

JH: “We were never debate. We were discussion.”

MS: “That’s one difference! But debates don’t have to be loud.”

MS: “Debate suggests there has to be a winner. Or a loser. And we’re not up to win or lose when we talk to each other. I’m not trying to show her up, she’s not trying to show me up, I’m not trying to prove her wrong or vice-versa. We’re just listening to each other’s viewpoints. Debate just seems like…I think there’s a connotation of it being staged. Debate makes it harder for people to believe that you’re authentically disagreeing. Sometimes people will think when there’s a debate, ‘Oh, you’re just saying that to disagree with her because you think that’s what we want to see.’There’s more credibility and hugging, as you put it, in discussion.”

That’s quite notable, especially considering that ESPN still airs (and heavily promotes) First Take, but it may help alleviate concerns from viewers worried that SportsCenter was turning into a debate show with this move. However, soon after this, Smith relays the congratulatory call he got from Patrick, and that leads into a discussion of how ESPN does want this to be very different than previous versions of SportsCenter, and does want it to be similar to His and Hers. It also involves Hill and Smith talking about how they got this job.

MS: “You said ‘Those letters, don’t let the platform change you. Don’t let them change you. Do you.’ And here’s the good news, and this will blow your mind as someone who was there at a different time, they have no desires on changing us.”

JH: “The fact that they asked us to do this, that’s a key part of it. This was not our plan. We were about a year out from our contract being up. We knew that they liked us and wanted us to keep doing our thing. We were of the mentality that we were just going to be His and Hers. And what were things that were needed to improve that? And the way it just kind of happened caught us by surprise. We were literally standing in the middle of the ESPN newsroom and Rob King, who oversees SportsCenter, doubles back, and he’s like, ‘Hey, I’ve got an idea. They told me that you’d say no, but I thought I’d tell you what I was thinking anyway. What do you think about you guys hosting the six o’clock SportsCenter?

Now keep in mind, we were going to fill in at various points, just for more publicity for our show, expanding our brand, doing something different, just as fill-ins. And we were like ‘Yeah, we agreed to that. We would fill in.’ And he’s like, “No, being the hosts.’ And we just started laughing, cause we’re like ‘We’re not anchors! It’s not what we do.’ And then he went into a great pitch, a great sale, ‘We don’t want you to be what people have imagined the product to be.’

Because SportsCenter has evolved a lot. A lot of people have maybe not noticed, but they have moved away from highlights in a lot of them. The morning is different, it depends on what time, you see with Scott Van Pelt, they have really embraced a huge culture change. So the more he started talking, and giving us the creative freedom, very similar to we’d had on His and Hers, as soon as he left and we’d agreed to meet with him in a more thorough meeting, a bigger meeting, Mike and I were like ‘That really sounded good. That sounded like something we could do.’ So just by the fact that they sought us out and recognized the things we had done let us know right away that they were ready for an abrupt change.”

For those concerned that this isn’t going to provide news, though, Smith had something to say later on that front.

“We’ll still deliver your news,” he said. “We’re not going to ignore breaking news. We can switch at a moment’s notice into breaking news. Jemele jokingly says that we’re not anchors, but we’re pretty proficient at that as well.”

An example of what this discussion might look like comes later in the interview, where they discuss Tom Brady and Bill Belichick’s ties to Donald Trump and if that’s a story or not:

That sort of approach wouldn’t work at all on a debate show. Smith and Hill have similar takes (that Brady’s links to Trump are worth asking about, especially if that means if he endorses particular views of Trump’s), and they discuss the issue in a pretty thoughtful, nuanced way, saying it’s not a football story, but it is an overall sports story. That will be familiar to those who watched His and Hers, and if they bring that to the new SportsCenter, it might be interesting to keep an eye on.

There’s no debate (or discussion) that this is a pretty bold leap for the SC brand, but both Hill and Smith are talented, and they’re capable of both delivering the news and analyzing it. That certainly could make for an interesting show, especially one that’s so focused on being a conversation about the news of the day. We’ll see how it does, and if it resonates with viewers.