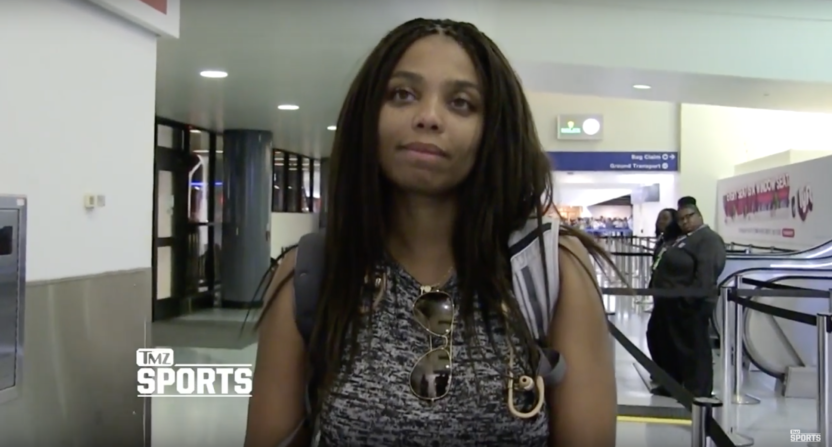 After a two-week suspension for suggesting fans should boycott Cowboys sponsors, Jemele Hill is coming back to ESPN on Monday. She will be back to team up with Michael Smith to host SC6 but before Hill is back at Bristol, TMZ caught up with Hill at the airport to talk to her about her suspension and comments.

Hill reiterated some of the things she said over the past month, namely that she apologized for putting ESPN in a bad spot. But Hill also revealed that throughout all this, she deserved her suspension.

On whether Hill would leave ESPN due to the suspension:

“Me and ESPN are fine. And it’s just, I know it’s great conjecture to think about what might happen, but, like, we’re fine. We’re in a good place and I’m happy to be back at the network.”

On if Hill will be back on Twitter and whether or not there are any restrictions placed on her:

“I want people to understand this. There was never any restrictions placed on me about Twitter. So, I’ll be back on Twitter, and I’ll be my usual self.”

On whether Hill felt she was treated fairly by ESPN:

“Going forward, we’ll be in a good, healthy place. It’ll be fine and I’m looking forward to it.”

“The only thing I’ll ever apologize for is, I put ESPN in a bad spot. I’ll never take back what I said. I put them in a bad spot and yeah, that’s the truth of it. I regret the position I put them in. I regret, a lot of the people I work with, the position we put our show in. I’ll never take back what I said. So you can take that to mean what it means”

Hill had two notable instances on social media that sparked controversy and both stemmed from the NFL and players kneeling during the national anthem in racial inequality and unfair police brutality protests. After President Donald Trump called for NFL owners to fire “son of a bitch” players who kneel for the anthem and fans to boycott and leave the stadium, Hill tweeted among other things, that Trump was a “white supremacist who has largely surrounded himself w/ other white supremacists.”

ESPN didn’t approve Hill’s comments and publicly distanced themselves for those comments but didn’t suspend Hill. When she was suspended, it was because Hill tweeted that fans upset with Jerry Jones’ comments about Dallas Cowboys players not playing if they are “disrespecting the flag” should boycott companies sponsoring the Cowboys. It was after that, where Hill inadvertently suggested boycotting companies who also sponsor ESPN, that she was suspended.