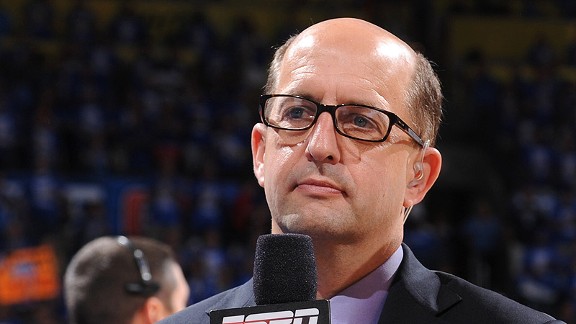 Jeff Van Gundy’s best trait as a broadcaster might be his irreverence. The former NBA coach and longtime ESPN analyst is rarely afraid to veer off topic and weigh in on whatever happens to be on his mind. That willingness to stray from the game at hand makes him come off as endearingly authentic. It also sometimes gets him in trouble.

Speaking on the Sports Illustrated Media Podcast with Jimmy Traina in an episode released Thursday, Van Gundy explained that his ESPN bosses typically don’t mind his tangents but that he has received a speaking-to on several occasions. One of those scoldings, he said, came after he mentioned then-NBA commissioner David Stern’s salary over the air. Another was when he brought up Augusta National’s history of discrimination right as ESPN was trying to promote its Masters coverage.

A quick recap of that situation: During a Suns-Mavericks game in April 2015, a day before the Masters was to begin on ESPN, Van Gundy’s partner Mike Breen read a promo for the event, then joked about how many off-color things Van Gundy would say if he called the Masters. Van Gundy replied, “Oh, like they didn’t allow black people and women in there? Something like that? Yeah, I’m glad we’re quiet about that.”

Fast forward to this week, when Traina asked Van Gundy whether he ever heard from his bosses after any of his “off-beat comments.” Here was Van Gundy’s response:

And then the one that I remember that I got a call on was I had some comments about the Masters during a promo for the Masters. And so the executives were in a room at the Masters with the Masters people. And I said some things that weren’t probably the best for business. But they were great, they just said, “Don’t do it again.”

Van Gundy then emphasized that his bosses are not overbearing, saying, “They give me more freedom than I would give myself, I think.”

Van Gundy also commented on his mid-game remark about Rihanna during last year’s NBA Finals, which caused a bit of a social-media stir.

“Everybody says that’s off-beat,” Van Gundy told Traina. “I would say if anybody saw her walking directly in front of them, no matter what was going on in their life, they would have stopped, gasped and noticed.”

You can listen to the full, wide-ranging conversation between Van Gundy and Traina right here.