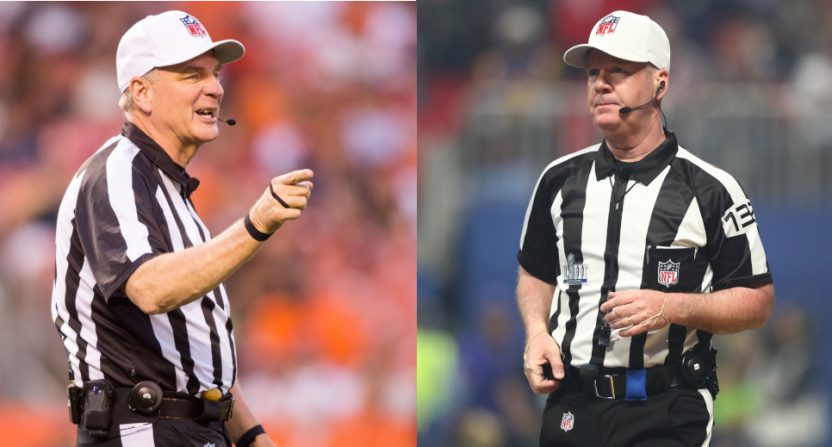 We now know one of the changes for ESPN’s up-in-the-air Monday Night Football booth, but it’s not with the still-to-be-determined primary analysts. Instead, there’s going to be a new officiating analyst in the booth, with John Parry (seen at right above) taking that role. Gerry Austin held the MNF officiating analyst role from 2012 through 2017 before leaving for a position with the Oakland Raiders. ESPN then hired Jeff Triplette (seen at left above) to replace Austin for 2018, a move reportedly at the behest of the NFL that took a lot of heat from Triplette’s many critics. And now, Triplette appears gone.

ESPN announced Monday that Parry (a NFL official for the last 19 seasons and a referee for the past 12 years who was the head referee at Super Bowl LIII in February) is joining them as a rules analyst. That release listed Triplette and Austin as “Former NFL officials who previously worked on Monday Night Football.”  It also detailed Parry’s responsibilities, which will include what Triplette (and Austin before him) did in the MNF booth as well as appearances on SportsCenter and NFL studio shows. Here’s more from that release:

National Football League official John Parry, who served as head referee for Super Bowl LIII in Atlanta in February, has joined ESPN as an Officiating Analyst. He will contribute to weekly Monday Night Football telecasts from the booth and offer analysis on ESPN’s NFL studio shows, SportsCenter and more.

…“John’s role will be a first for ESPN’s NFL coverage. He will educate our commentators, staff, and, most importantly, millions of fans,” said MNF producer Jay Rothman. “John will appear on our array of studio shows throughout the season and be part of the Monday Night Football team. With the attention to replay and rules at an all-time high, he is uniquely qualified to teach, add perspective and bring clarity to fans.”

Parry added: “I will fully embrace this new position. We hope to leverage 20 years of NFL officiating experience to our talent and to our great fans. Bringing clarity to a complicated game will be both challenging and rewarding. ESPN is a perfect fit based on their dedication to educating and entertaining fans.”

John will be terrific https://t.co/K0bhzqpDPL

The idea of adding a rules analyst who’s able to appear on SportsCenter and ESPN NFL studio shows as well makes a lot of sense. As that release notes, the NFL’s rules and interpretations of those rules are receiving a whole lot of scrutiny these days, especially with controversial plays in the playoffs such as the uncalled pass interference late in the Saints-Rams NFC Championship Game. That led to owners voting last week to make pass interference (called and uncalled) reviewable. It definitely would have been useful for ESPN to have a former official appearing on SportsCenter or NFL Live or whatever else immediately after a controversial call like that to break down the rules in question and provide some perspective from the officiating side, and hopefully Parry will be able to do that for them.

The even more interesting part here may be the exit of Triplette, though. That hire was widely criticized at the time given Triplette’s various high-profile missteps as a referee, including in the final game he worked, the Chiefs-Titans playoff game (which received a “Officiating in Titans-Chiefs was ‘horrible,’ but it didn’t decide the game” from ESPN’s Kevin Seifert last January). And Football Zebras’ Cameron Felipe reported that “the NFL specifically steered ESPN to hire Triplette.”

So what happened there? ESPN didn’t wind up going to Triplette all that much this past season, but they took some criticism when they did. But that criticism was mild compared to the complaints about Jason Witten, who ESPN intended to bring back before he left to rejoin the Dallas Cowboys. So it seems unlikely this is primarily about viewer reaction. It could be that Triplette didn’t enjoy the role much and headed out on his own accord, or it could be that ESPN producers thought they could do better. And maybe the NFL was no longer pushing to have Triplette there.

Parry’s new role seems like it should help both ESPN and the NFL more than keeping Triplette would have, all things considered. Parry is a former referee who’s taken less public criticism, and he’ll also be able to provide a former official’s perspective on a variety of ESPN shows, not just MNF. And that may be important; MNF is more-watched, but debates on a call there usually don’t last much past the next play or two, as there are new plays to move on to. By contrast, ESPN’s studio programs often break specific calls down in detail, so bringing a former referee in for that seems helpful. But it’s still quite interesting to see ESPN move on from Triplette so quickly, especially considering how much backlash his hire generated.