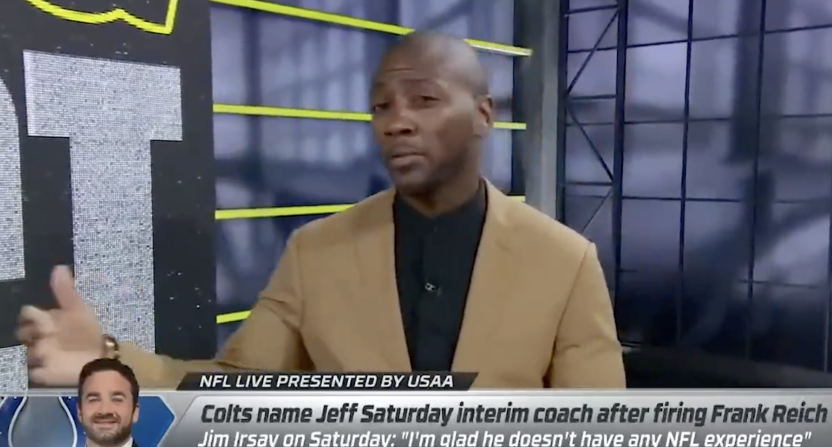 NFL Network host Kyle Brandt ranted Tuesday that he didn’t think anyone on ESPN would be able to criticize former colleague Jeff Saturday, who moved from the studio to the NFL coaching ranks on Monday. However, a day later, it appears that some of Saturday’s former co-hosts are more than willing to enter the critical fray.

Certainly, there was a lot of confusion in Bristol on Monday when the Indianapolis Colts announced that they would be hiring Saturday as interim head coach to replace Frank Reich.

Louis Reddick was one of the initial ESPN talents to react publicly to the news, but he kept most of his reaction on the Colts themselves instead of focusing on Saturday’s fitness and deservedness to be an NFL head coach.

However, by the time Tuesday rolled around, it appears that ESPN’s football analysts, talking heads, and commentators had the requisite time needed to put their personal feelings about Saturday aside and start critiquing the unorthodox hire.

Ryan Clark had the strongest gripe about the hiring, airing those grievances and concerns during an on-air segment Tuesday.

I believe in Jeff Saturday’s intelligence & character; not his hiring. There are so many layers to this. Is it about Privilege, race, nepotism, relationship , or respect?

In the end the comfort & familiarity of friendship overwhelmed Irsay… & could overwhelm the locker room. pic.twitter.com/1KVHUTTcLI

“Many people are talking about race. This isn’t about the race of the coaches, there are guys like Gus Bradley, who are former head coaches, on that staff,” said Clark. “Or guys like Scottie Montgomery. So it’s not about their color. This is about relationship. And that does bring it to race for this reason. There isn’t the representations of face likes mine or minority faces who can build the familiarity that Jim Irsay has built with Jeff Saturday.

“How is he gonna walk into Gus Bradley’s office and say ‘Hey, you should call these plays?’ How is he going to tell Scottie Montgomery the running back room should run like this when you haven’t been there and haven’t been in that position to elevate?

“And then, if I’m a player, I’m going to think about this: you’re not with us. How are you with us? Were you here in the offseason? Were you here during training camp? Have you been here for the first nine weeks of the season? So if you’re not with us, then you must be with him [Irsay]. How can I share what you what I’m going through? How can I tell you about the difficulties I’m facing as a player and not believe that you’re gonna sit on Jim Irsay’s couch later on that night and pillow talk?

Never one to let a personal relationship stop him from speaking his mind, Stephen A. Smith shared similarly mixed feelings about Saturday’s hiring.

.@stephenasmith shares his thoughts on Jeff Saturday being hired as the interim head coach for the Colts and the Rooney Rule not applied for the position. pic.twitter.com/uC9Utf1diL

“I do have an issue with it,” said Smith when asked if he had a problem with Saturday’s hiring. “But I want to make sure that the world is clear, my issue is with the Rooney Rule and the spirit of it. Although this is not a violation of it, per se, because it involves interim status. The spirit of it is to make sure that when you’re talking about people getting opportunities to be a head coach in this league, that minority candidates are interviewed and genuinely recognized as candidates for the job, which is something that NFL teams have been violating since the rule’s implementation decades ago.

“My issue is with the process that was not followed. But it’s not going to usurp the level of joy and affection and well-wishing for one of the great dudes in our business.”

Lots of tip toeing around the Jeff Saturday hiring for the Colts. Jeff was a BLAST to work with at ESPN, but it doesn’t change the fact that it’s a HEAD SCRATCHING-SLAP IN THE FACE TO EVERY COACH ON THAT STAFF type of decision. Stephen A. Smith will be coaching the Nets next.

“Lots of tip toeing around the Jeff Saturday hiring for the Colts,” wrote RGIII. “Jeff was a BLAST to work with at ESPN, but it doesn’t change the fact that it’s a HEAD SCRATCHING-SLAP IN THE FACE TO EVERY COACH ON THAT STAFF type of decision. Stephen A. Smith will be coaching the Nets next.”

Meanwhile, Dan Orlovsky kept things cordial during an appearance on The Dan Patrick Show, noting that Saturday is there in large part because of “his relationship with Jim Irsay,” perhaps in part because it’s possible Saturday could tag him for a coaching role at some point.

Dan Orlovsky (@DanOrlovsky7) shares his thoughts on the #Colts hiring Jeff Saturday as their interim Head Coach and discusses the possibility of him coaching on Jeff's staff pic.twitter.com/s13G6BZdsQ

ESPN NFL analyst Domonique Foxworth joined Get Up! host Mike Greenberg on Tuesday’s episode of the Greeny podcast. The two echoed the ongoing train of thought that, while they wish their former colleague well and have high respect for him, they have concerns about the hiring and what it represents.

“Two things can be true at the same time: We love the man and can wish nothing but the best for him, while also understanding there are some issues with this situation,” Greenberg said.

“I think that he’s capable and I’m rooting for him, and I think it’s possible that he could succeed — whatever success is in this current situation,” Foxworth added. “But I also think it’s our responsibility to point out how unusual this is and how unfair it may feel to all the coaches in football, and particularly the coaches in that building.”

So while we’ll have to wait and see how ESPN’s pundits handle Saturday’s game management on Sunday when the Colts take on the Las Vegas Raiders, it’s clear that they’re pretty willing, so far, to flip the switch on Saturday and the situation he’s found himself in.