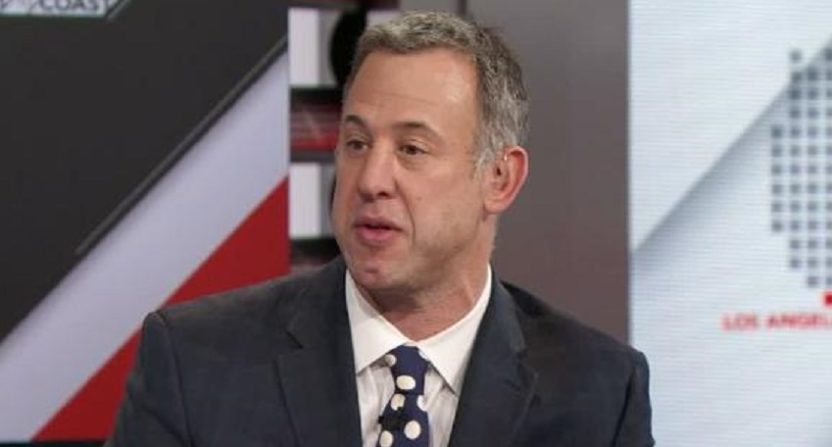 College basketball reporter Jeff Goodman left ESPN for a job at Stadium earlier this summer, and he’s now opening up about some of what happened during his tenure at the Worldwide Leader. Goodman spoke to The Big Lead’s Ryan Glasspiegel on the Glass Half Full podcast, and while their conversation covers a whole lot of college basketball and NBA topics, the most notable part from the media side may be what Goodman said about why he didn’t cover the FBI investigation that hit many top college programs.

While ESPN did do some coverage of that, Goodman wasn’t involved, and in response to a question from Glasspiegel about why Yahoo led the way on that and why Goodman didn’t cover it himself (7:08), Goodman said he was told not to.

“To be honest, I was told by one higher-up at ESPN to stand down on the FBI stuff, basically not to cover it. I pitched numerous ideas, tried to do it, and was basically told not to. And I said to the person, ‘How can that be the case, with all the relationships, with all the information I’m privy to in college basketball, wouldn’t you want me leading the charge on this?’ And instead it was almost like ‘Well, don’t ruffle any feathers with the relationships you have.'”

“For me, I’m a reporter! It’s what I am at the heart of it. I was taught at the Associated Press by some really good people. I pride myself on the fact that I can be versatile enough to write a feature, to break news, to write an investigative piece, to be honest about what I’m doing no matter what the relationship is with a coach, a player, whoever. And I was surprised at that, and it frustrated me. I certainly wanted to cover it; it’s been the biggest story in college basketball over the last year! And like you said, there aren’t that many people that are really covering it. Yahoo’s done a good job.”

“I never got an answer when I asked that person. I never got an answer. I said ‘I think I can get information that no one else can.’ And they had Mark Schlabach, who’s a good reporter, his past speaks for itself and everything he’s done in this industry, they had him doing a lot of it. Paula Lavigne does a great job from Outside The Lines, she was covering it as well. But I felt there was nobody who had the information and the contacts that I had at the lowest level.”

“Remember, I came up through recruiting, so I knew a lot of the agents, AAU coaches. Obviously it hit some of the college coaches, I knew people who knew people that had been arrested, Christian Dawkins, Andy Miller that whole deal. So I was baffled on that one to be honest. But, you know, the greatest thing about ESPN is its size and the toughest thing to navigate is its size, because they’ve got so many moving parts and so many people, and like you said, leadership changes quickly.”

That’s definitely interesting commentary from Goodman. Of course, it should be noted that that this is more about internal assignments and which reporters get to cover what than ignoring a story entirely (as Goodman noted, Schlabach and Lavigne did do some pieces on this), which would be even more problematic. And the size of ESPN is a big part of this, as Goodman notes; with so many moving pieces, not everyone gets to do what they want or cover what they want.

But it still doesn’t seem great to tell one of your top college basketball reporters to ignore one of the biggest college basketball stories out there, and that’s certainly not something that would enthuse a lot of reporters. And that speaks to some of what Goodman said earlier in this podcast about why he left ESPN for Stadium. He talked about how ESPN often had him playing a ton of different roles but never used him consistently, and (at around 6:20) how they wanted him to just state facts in video hits, but leave the opining to the former coaches and players.

“I feel like at Stadium, Ryan, I can give my opinion. They encourage me with the information I have, which I’ll put against most people in college basketball and even NBA and some recruiting, they encourage me to give my opinion, an informed opinion. Whereas at ESPN, a reporter was more put in a box, give the information, but let the former coaches, former players give the opinion. I don’t understand why a reporter who’s got more information than most isn’t able to give their opinion as well.”

While Goodman has positive things to say about ESPN as well, and talks about how he enjoyed working there, it does seem like the company wasn’t a great fit for him by the end of his tenure. And it sounds like Stadium will be more in line with what he wants to do. We’ll see how this move works out for him, but at the least, it seems like as one of a smaller cast of reporters at that network, he should have more latitude in covering what he wants to cover and expressing his opinions where appropriate.