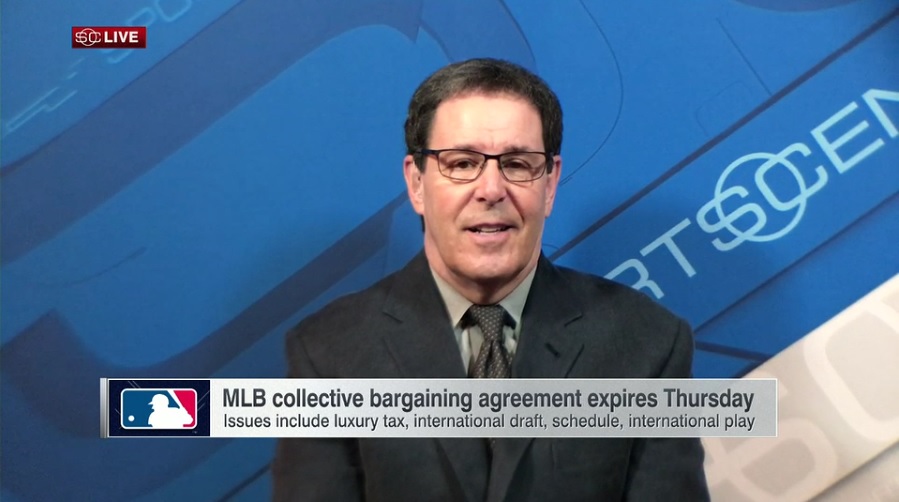 ESPN’s April layoffs saw their baseball staff hit particularly hard, and one of the people let go was long-time MLB reporter and columnist Jayson Stark. Stark had been a senior baseball writer with ESPN since 2000, and had been covering the sport since 1979 (first with The Philadelphia Inquirer). He recently spoke to Chuck Wasserstrom for a piece that ran on MLB Trade Rumors, and said while he was sad to leave, he’s still very upbeat about both his time at ESPN and whatever’s next for him:

In late April, Stark – who was used to breaking baseball news – suddenly was about to become news. The word was going to get out that he was no longer working for ESPN, so he provided his own scoop on Twitter: “For 17 yrs I’ve had a dream job covering baseball for ESPN. Today is my last day. Thanks to all the great people at ESPN, MLB & all of you!”

…As a “free agent,” Stark is mulling his next career move. When a decision is made, his 535,000-plus Twitter followers (@jaysonst, for those who don’t) will be among the first to know.

…“There was a period where it felt like every five minutes, someone in baseball or the media universe was calling me and telling me the most incredible stuff I’d ever heard about myself. That was just overwhelming. It was amazing. …“I don’t know how everybody reacts when that happens to them, but I’m so grateful. I really spent weeks trying to return every message, every phone call, every email, every tweet that I could, every Facebook post, every text. It was incredible and gratifying and it was fuel to keep going.

“The second part I think is … all right, how do you handle an event like this? For me, I’m Mr. Positivity anyway, so I’m just looking for that next cool thing to do. I’m taking my time and trying to find that thing.

“The third part of it is … I’ve been busier than you would think I would be. Part of that is just because I thought it was important to wake up every single day with a purpose. My routine is not that different than it’s always been. Pretty much every day, I watch video of the day before in baseball, and I keep my daily books of stuff that I find cool and fun and strange and interesting. I keep my day-by-day books because I want to stay engaged in a sport that I love.

Stark then goes on to talk about how he’s still doing local radio hits on ESPN affiliates, and that part of his goal there is to show how much he still loves baseball:

One thing that I think has always been clear is this was a labor of love for me. It was a dream job for me. I wanted to make clear by the way I went about life after ESPN that I still love it and I will continue to love it. Whatever I do next, I’ll love that. That’s been a big part of it.

That’s a pretty optimistic perspective for someone who just lost a dream job, but Stark has always been known for his optimism. There are lots of other interesting tidbits in there, too, including him talking about how he’s looking forward to attending the Baseball Hall of Fame’s Induction Weekend this year (something he couldn’t always do while at ESPN thanks to its proximity to the trade deadline), his discussion of how covering baseball was about building relationships for him (with players and managers, but also with the fans who engaged with him, and the ones who kept particular stat databases and more), his thoughts on interviewing less-prominent players who are often more open with quotes, his comments on how covering the summer trade deadline stacks up to attending the winter meetings, and his story about how he inadvertently spawned a 12-year trivia segment on Mike and Mike:

“Here’s the story of how the Mike & Mike trivia came about. There were certain weeks that there was stuff I wanted to talk about, stuff that I’d written that I wanted to make sure they’d seen. So I’d make sure to send them those ideas or pieces. Well, you probably remember that when I’d write a Rumblings and Grumblings column, I’d always slip a trivia question in there. So one week, I sent them that week’s Rumblings and Grumblings and they saw the trivia question. They said, ‘Hey, this would be fun. Why don’t we try to answer your trivia question?’ They did, and they got it wrong.

“After the show, the producer got on the phone and said, ‘Hey, we have to do this again next week.’ We wound up doing it for 12 years. That’s how the whole Stark trivia thing became a thing. Even though I used to ask trivia questions in columns for years, it just became a thing. Now, even though I’m no longer on Mike & Mike, people are still begging me for trivia. I’ve been throwing trivia questions out there from time to time on Twitter, just because it’s fun and people go crazy over those questions. I even have players tell me they look forward to those questions – like relievers, for example; they take my trivia question, they go out to the bullpen that night and they ask all the other relievers. It really is a way of connecting with people who love baseball as much as I do. That’s my favorite thing about it. That’s one of the best things about social media; it’s just so interactive.

While the world of baseball reporting and sports media has changed dramatically since 2000, as Stark discusses in that piece, it seems likely there will still be plenty of opportunities ahead for him. He’s a highly-respected baseball writer who still clearly loves the game, and he’s someone who’s proven that he’s able to evolve with the times, embracing social media, radio appearances, podcasts and other new elements of the modern world. We’ll see where he lands, but it’s definitely interesting that he’s still covering the sport so closely and that he’s still so upbeat.