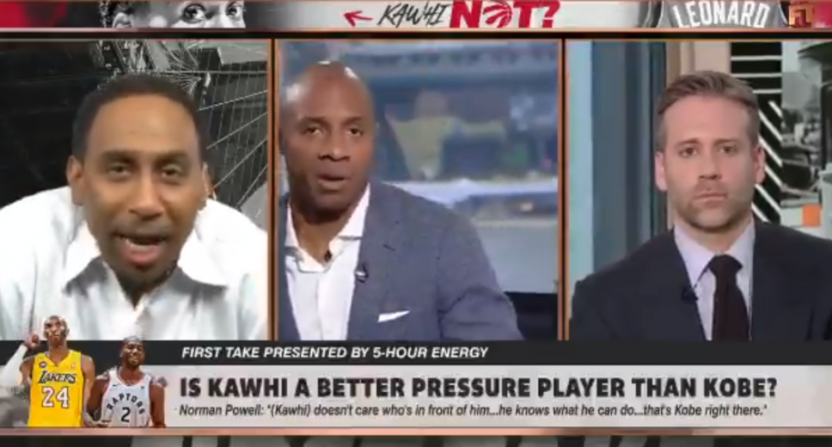 There have been a lot of moments aired on ESPN’s First Take over the years that are enough to make your head explode. Remember the “Tebow-free” edition of First Take that managed to mention his name over 125 times? That happened seven years ago and to this day I still fall into a defensive position any time I hear the name “Tebow” mentioned in public.

But in spite of all the asininity we’ve seen over the years, rarely have we ever seen what happened on Tuesday—a take so hot, so scorching, so scalding, that it actually caused someone to walk off the set in self-defense for fear that they would be turned into a steaming pile of ashes.

ESPN basketball analyst Jay Williams had to simply tap out after hearing Max Kellerman argue that Kawhi Leonard is a “better player under pressure” than Kobe Bryant.

.@RealJayWilliams needed to walk off set after @maxkellerman said Kawhi is better than Kobe under pressure. pic.twitter.com/k0WLIdkL1J

The best part is that Williams actually gets up, takes a second to compose himself, sits back down, and then just nonchalantly gets out his phone live on the air and finally walks off.

Of course, this is what First Take is built to do and has done for years – have completely subjective arguments about nonsensical things like “clutch genes” and “better players under pressure” that do nothing but get impassioned sports fans riled up. Leonard has been great in his career and this postseason specifically, but there’s nothing quite like saying a modern star compares favorably to Kobe in any way to get people particularly mad.

Who knows, maybe this scene was all planned out to amplify the theater of “Embrace Debate.” However, I’d like to think that Williams was just speaking for sports fans with a rational mind that have finally had enough of the years of hot takes. Amazingly, this Kobe-Kawhi take might even not be Kellerman’s hottest on the day – that might belong to the one where he said that Larry Fitzgerald “might” make the Hall of Fame some day.