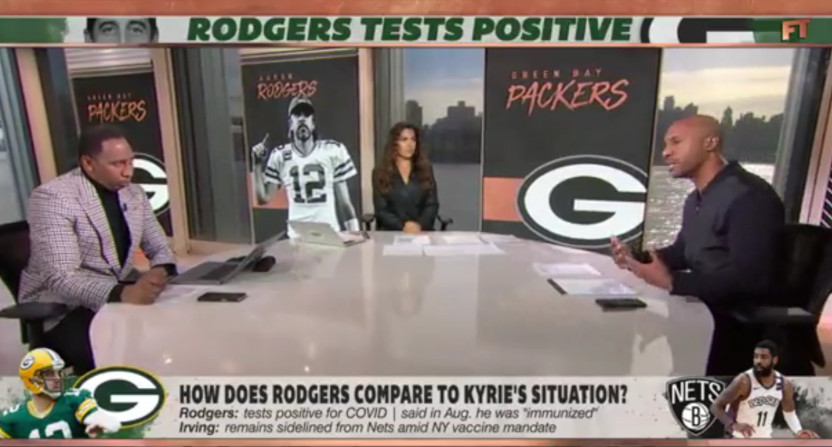 There’s a wide-ranging discussion out there about how sports media have handled the news that Aaron Rodgers is unvaccinated versus the news that Kyrie Irving is unvaccinated, with many citing a perceived double standard with harsher criticism for Irving. And absolutely, from the facts of each situation, Rodgers would seem to deserve harsher criticism; unlike Irving, he has been able to play for his team, but that’s from a factor outside of his control (looser vaccination rules in Green Bay versus New York City), and unlike Irving, he did not admit to being unvaccinated, and he put media members at risk by giving unmasked press conferences (in contrast to NFL protocols).

Jay Williams brought that up to Stephen A. Smith on First Take Thursday:

Jay Williams is the last person with a brain on ESPN.

Calling out SAS on his double standards pic.twitter.com/JBy5jzjc5m

Williams cites several quotes from Smith about Irving, including “it amounts to betrayal for Kyrie” and calling him “flat-out stupid,” a “bad teammate,” and “selfish.” He then says when it came to Smith’s comments on Rodgers, “I just didn’t feel the same venom. I didn’t feel the same energy that was associated with Kyrie Irving. And a part of me wonders why. How come you don’t hold Aaron Rodgers to the same? Who lied? Who lied on national television? Who looked reporters in the eye and said ‘Yeah, yeah, I’m immunized.’ Why not? I don’t understand that.”

Williams has some valid points there. But Smith’s response is also notable, and it really illustrates a key component with Smith is not just what he says, but how he says it.

Response for those who want to see it: pic.twitter.com/U9nw2zofwp

“Number one, I wasn’t sitting across from you talking about Aaron Rodgers. I was sitting across from Bart Scott and Dan Orlovsky, who both agreed with me. You and I were arguing, so that might have something to do with my intensity level. …I’ve been on record, Aaron Rodgers is a liar. Aaron Rodgers needs to be suspended. I don’t know how much stronger I can be with that.” Williams then says that Scott said that first and Smith “tacked on” that. Smith then says “You and I were getting into an intense argument. Bart Scott and myself and Dan Orlovsky were agreeing with each other.” And it goes on from there.

There are a few notable things to take away from this. For one, the “Jay Williams is the last person with a brain at ESPN” comment in the initial tweet is a heck of a stance, especially considering that this spawned from Williams strongly defending Irving’s refusal to get vaccinated in the first place, and especially considering some of Williams’ recent actions.

Beyond that, sure, Williams has a point that Smith didn’t sound as amped up about Rodgers as he did about Irving. But Smith actually has somewhat of a defense here; first off, yes, he’s going to be louder in an argument than in an agreement, and the actual words he said about Rodgers were pretty strong, leading to headlines like “Stephen A. Smith: Aaron Rodgers Comes Across as a Coward.” And there’s an interesting conversation to be had about if the key thing from Smith is his position or his theatrics.

It’s long been admitted by almost everyone involved with it that sports “debate television” is manufactured in some ways to find the largest disagreements or the most controversial opinions and amplify them. The degree to which that manufacturing exists is itself a matter of debate, but even those who try to defend what we hear from the likes of Smith or his former co-host Skip Bayless (now hosting Undisputed on FS1) say that those are their real opinions, but the segments are generally picked for where there’s conflict between the hosts.

The Rodgers situation is an interesting outlier there, as there weren’t really differing opinions between Scott, Orlovsky, and Smith. But that situation was so newsworthy and the biggest story of the day, so they absolutely had to cover it, even without dissension. So it led to more agreement and less yelling than you might often find on First Take.

And with First Take in particular, that maybe shines a further light on the move this year to get rid of co-host Max Kellerman (at least partly at Smith’s instigation) and instead have Smith debate a rotating cast of characters. On some level, that’s absolutely about Smith’s ego, and about his status as the highest-paid person at ESPN, and about the need for it to be his show. He can’t have anything close to an equal, he has to have guest debaters. But there is also an argument that it’s easier to find people who strongly disagree with Smith, and who bring out the screaming, ranting Smith that many viewers apparently enjoy, if you’re regularly changing up those people.

What’s also interesting here is that Smith’s response to Williams is essentially “Judge my quotes by their substance, not by how I deliver them.” And, on at least some level, that’s absolutely fair. The actual position really is what matters, regardless of how it’s dressed up, and Smith’s actual position on Rodgers is harsher (calling him a liar and calling for a suspension) than it was on Irving (he offered a ton of criticism, but didn’t call for league action, as there wasn’t any need for it).

But that also does maybe add a further revelation of what’s behind the curtain of TV sports debate and opinion shows. It’s similar to Colin Cowherd’s admissions of the need to be “interesting rather than correct” and only trolling large fanbases. Sports debate is far more wrestling than sports or journalism, and even while some viewers are insisting “It’s still real to me, damn it!”, Smith’s comments here are the latest illustration of how much theatricality goes into the “debate moments” that get widely discussed.

The true takeaway from this isn’t that Smith proposed more punishment for Irving than Rodgers, as he did not. It’s that he got called out by Williams for being less amped up in his (actually harsher) criticisms of Rodgers, and that he responded that that was because his debate opponents agreed with him. So Smith is saying that if ESPN had been able to summon someone to defend Rodgers’ actions, Smith would have gotten as animated about him as he did about Irving. And while there really isn’t much of an argument for taking most of what’s said on these shows with any level of seriousness whatsoever, this case is a good reminder that the substance of the positions can matter more than the style.

It’s certainly interesting that people, including Williams, would come away from this with the position that Smith has a double standard, and that he was harsher on Irving than he was on Rodgers. And it’s understandable how they got there, with his over-the-top anger and bravado and the rest fully on display when he was arguing over Irving (who had someone, Williams, defending him), and with that not as evident when he was largely concurring with Scott and Orlovsky on Rodgers.

But, if anything, that reveals the bizarre nature of these debate shows, where how someone says something is considered as important as what they actually say. (And that helps to explain why people continue to treat Smith as any level of authority despite his regular basic factual errors.) There’s some logic to judging Smith’s opinions by his actual positions rather than how animated he gets, but it does help to illustrate how odd his overall ESPN role is, and how many people are more interested in how upset he gets on a particular subject rather than what he’s actually saying.