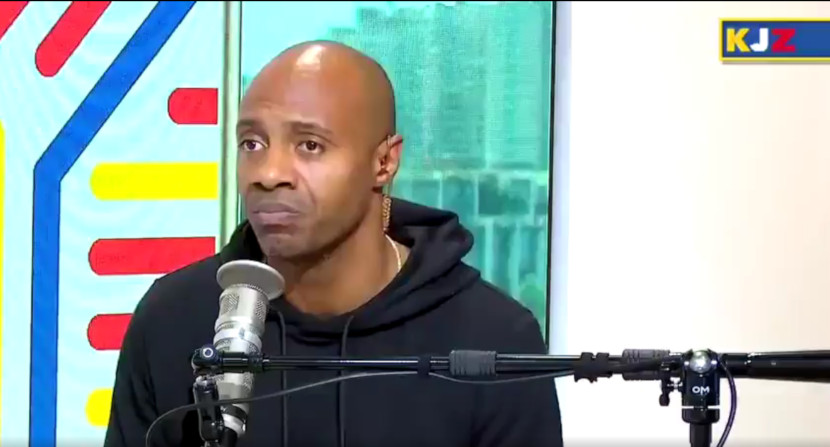 On Tuesday, ESPN’s Jay Williams relayed quite the story on air on Get Up (Mike Greenberg’s Morning Hot Take Parade), claiming that Kevin Durant got mad at him at a holiday party years ago for an on-air comparison that said Giannis Antetokounmpo had physical qualities like a combination of Durant and Anthony Davis. Williams said Durant told him “Don’t you ever compare me to Giannis,” and cited that as a personal element in the current Nets-Bucks series. Those comments made wide headlines, and Durant then took to Instagram to dispute Williams’ account, saying in the comments of a Sideline Sources post on this “This a fuckin lie. Jay Williams can NEVER speak for me, ever.” Well, on his ESPN Radio and ESPNEWS show (Keyshawn, Jay, and Zubin, the morning-slot successor to Golic and Wingo and Mike and Mike before it) Wednesday, Williams stood by his story, but offered a partial mea culpa for sharing it on air:

“I stand by my story”@RealJayWilliams responds to Kevin Durant disputing the story he told on yesterday’s show pic.twitter.com/RCXq0wOv3C

“I stand by my story. You know, I was probably wrong for sharing a personal story, but that’s what we do — we share personal stories. But yesterday, I sat there, I’m not getting back and forth on social media, I was with my family all day, staying positive, it’s all good. And for us, look, man, it was meant as a compliment. There are levels to this. It was about saying hey, how different K.D. is. It’s unfortunate that K.D. felt that way at that moment, but I wish K.D. nothing but love and all the best success. I hope they win a championship. We talk about them every single day. Shoot, the other day I was talking about him being the best player in the world. ”

“That’s all I got to say about that, we’re moving on, and Key and I are talking about sports the way we typically talk about sports, and that’s the end of that, in my opinion. We rock out and we talk about games on the floor. Now, there’s some other people that made some other comments that I might address later on, but we’ll save that for another day.”

That was not, in fact, the end of that, though, and it was not saved for another day. Later in the show, co-host Keyshawn Johnson brought up former NBA player Stephen Jackson, currently the co-host of Showtime video podcast All The Smoke and sometimes a controversial figure in his own right. On Tuesday, Jackson went off on Williams over this story on Twitter and Instagram.

“What’s up, world. Hey, I gotta be the one. Man, nobody don’t talk to J Will. That’s just being real. This is being real, bro. The fraternity that we got, I don’t know nobody that talk to J Will. I don’t know nobody who, I, I ain’t seen him nowhere for nobody to talk to him. No, he lying, I know he lying.  And then me, knowing KD, KD don’t even talk like that! KD don’t compare himself to no other player! In as many conversations as we’ve had, I’ve never heard KD compare himself to no player or say anything about another player like that. So we know what that’s about, bro.”

“You ain’t never seen us on All The Smoke make up no stories. Everything we speak is facts, we don’t make up nothing. J Will, come on, man, you’re supposed to be part of this basketball fraternity. We know what’s true and what’s fake, bro. Stop it.”

Here’s Williams’ response to that on Wednesday’s radio show:

“We don’t roll in the same circles.”@RealJayWilliams has no issue with Kevin Durant, but Stephen Jackson? That’s a different story. #KJZ pic.twitter.com/nwN3PEF9AY

Johnson says “In those situations, you get other people chiming in, and Stevie Jack, who’s a friend of mine, also had stuff to say about the situation with KD. Which, I thought, Jack, I get it, but it had nothing to do with him.” Williams says “It’s obvious Jack don’t rock with me. I don’t care, I don’t need to be liked by everybody. And Jack says certain things like we don’t roll in the same circles, I didn’t roll in your circles, Jack. I’m cut differently than you are, Jack, and that’s fine; I’m going to do my thing, you go and do your thing. But I know what rooms I roll in. I don’t project it, I don’t need to tell the world what rooms I roll in.”

“If you want to rock out that way, if you want to do it for your show, then great, congrats to you, Jack. Do your thing. I know Matt [Barnes, Jackson’s All The Smoke co-host], Matt and I kick it, we talk here and there, love what Matt and those guys do. But don’t try to attack my character.”

“You don’t know me, Jack. You don’t spend any time with me or my family. You haven’t called me. I reached out to you when all that stuff happened with George Floyd (Jackson, a friend of Floyd’s, has been a key figure in those protests), you didn’t reach back out to me. So you know what, do you, Jack! Just keep me out of it! Don’t insert yourself in a conversation between myself and someone else to piggyback off that. Because that’s what it seemed like.”

So, there are a few notable things here. One, Williams is standing by his story even after Durant’s pushback, and even mostly standing by his decision to share it on air. In that first clip, he says “I was probably wrong for sharing a personal story, but that’s what we do — we share personal stories.” So that’s not really an apology. (And no, most people in sports media don’t go around regularly telling stories from holiday parties on air, so “that’s what we do” isn’t a great defense.)

The other criticism for Williams here comes from him waiting a full day to address Durant calling him a liar, and then doing it on his show. That’s right out of the Skip Bayless school of “Tune in for my lame attempt at an apology.” Williams has his own social media platforms, including Twitter (where his sole tweet from Tuesday was a complaint at 8:15 p.m. Eastern about Joel Embiid only getting one MVP vote). ESPN also has an army of public relations staffers that could have helped him craft and put out a statement. And being called a liar by one of the most influential players in the NBA seems like a serious enough accusation that it deserves to be addressed as quickly as possible. So Williams’ decision to wait there was unusual, and not the best move.

Beyond that, the balance of probabilities at this point does appear to be that this Williams-Durant conversation did happen in some way and form. Williams’ “I stand by my story” is certainly a double down there, and it seems unlikely that he’d do that if there was any chance of this being proved imaginary. However, that doesn’t mean that Durant’s “lie” criticism is necessarily all wrong, either; Williams’ recollection of that conversation may be very different than Durant’s, and it may be different from what was actually said. An oral account of a remembered conversation from several years ago (Williams didn’t even specify a date) isn’t the clearest record in any case. Maybe Durant’s “lie” language is too strong for how Williams later portrayed this, or maybe it isn’t (we’ll probably never know unless others also overheard this conversation), but it is notable that Durant objected not just to this being shared on air, but to Williams’ account of events.

And lastly, it’s now interesting that this has spread into a verbal fight between Williams and Jackson. On that front, Williams seems to have some higher ground. Jackson absolutely isn’t privy to all of Williams’ conversations, or the full list of who he does and doesn’t talk to. And just because Jackson doesn’t talk to him or talk about him or see him at events doesn’t mean that Williams doesn’t interact with NBA players. And even Jackson’s attempt to refute this with “KD don’t even talk like that! KD don’t compare himself to no other player!” falls short, as the point of Williams’ story was about Durant being upset about a comparison, not making one. And Jackson’s “I know he lying” doesn’t really work; he doesn’t appear to have any more evidence than the rest of us on if this Williams-Durant conversation happened or didn’t happen.

Williams’ response to Jackson seems stronger than his response to Durant, and his criticisms of Jackson for stepping in here have some merit. And it’s notable to see him address these criticisms from Jackson. And it’s certainly notable that a couple of prominent NBA analysts are going at each other this way.