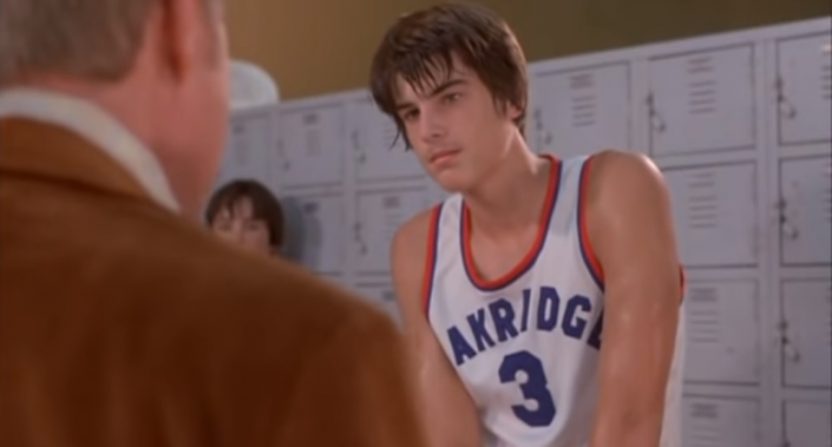 ESPN college basketball expert Jay Bilas has spent most of his life in front of cameras. Before he was a color commentator and studio analyst, the former Duke University center had a side hustle as an actor. He has appeared in commercials, a hit television show, and even a cult classic movie.

Bilas recently spoke to AA about acting, college basketball during a pandemic, and his favorite entertainment choices.

What’s the most fun you’ve had acting?

“When I was on The White Shadow in high school. That was the best. It was a hit show in the late 70s. It was something that all my friends watched. I was on and all my teammates. We were the opposing team in one of the episodes. It was just fun. You were 16, 17 years old. To be able to do that was really cool.”

How did that come about?

“One of my friend’s father was college basketball coach Dick Baker. He recently retired as a scout for the Dallas Mavericks. He was the technical consultant on the show. He plugged us in as the opposing team.”

What led you into acting later in life?

“I was playing overseas, and I got a call from someone I knew in the Lakers organization. They were filming a Minolta camera commercial and were looking for basketball players, 6-8 guys that can play. I thought great. (When I got to the audition) I was one of 60 guys who looked exactly like me trying out for the role. I wound up getting the part. It was filmed in Southern California in 1987. It’s still floating out there.

How did that lead you to being in the 1990 movie I Come in Peace?

“I got into the Screen Actors Guild because I got that commercial. Then I got an agent within a week. I did a Budweiser ad and some other stuff. (My agent) said ‘Have you done any acting?’ I said ‘I did some in high school but nothing to speak of.’ He said ‘Why don’t I send you on a couple of auditions. See if you like the process. If so, I’ll send you on some more.’

“The first thing he sent me on was this Dolph Lundgren film. I read for it and I got a couple of callbacks. I wound up getting the part and it was the first thing I read for. I played the alien cop in the film and had one of the bigger parts in the movie. Kind of bizarre how that started.”

Throwback Thursday! The Bilastrator in his film debut, as an Alien Cop in I Come in Peace. Oscar worthy performance. pic.twitter.com/UZvrFeVyfH

Were you into science-fiction?

“I had seen The Terminator, but I wouldn’t call myself a science fiction fan. I didn’t know the movie would achieve bizarre cult status. I’m not here to say it was that great of a movie. But from time to time I’ll turn on the TV and it’s on. I’ll get calls from friends and they’ll say ‘Hey, your movie is on.’ I kind of get a laugh out of it.”

Turning to college basketball, what has been the biggest challenge broadcasting?

“Traveling has been a nightmare. You’re on edge all the time, You’re locked down in your hotel. You can’t go anywhere. There’s nothing normal about it. It’s a little bit odd when you get to the game and you’re so far from the court. You can’t really interact with the coaches. I’ve never gone to a game where I didn’t talk to anybody at the game. That’s the way it is now. It’s strange.”

At some schools, like Duke and Virginia, the men are still playing while the women have canceled their seasons. What do you think of that?

“The contradictions are all over the place. Most fans are like “Just deliver the product.” They are not asking: “What’s being sacrificed so we can watch this?” It doesn’t take a genius to figure it out. We’re playing for one reason. We’re playing for money. And I’m not saying that’s bad. I’ve traveled around when I shouldn’t be traveling. I travel around for money. But I admit it. If it wasn’t for my job with ESPN, I wouldn’t be getting on these planes.”

What do you think of the decision to have the entire NCAA Tournament in Indiana?

“There are a lot of challenges. It’s essentially a bubble. Indianapolis makes sense. The players are living in bubbles now. They live in complete isolation. The only time they’re let out is to play. Oddly enough, the biggest threat to player health are the staff and coaches who all go home at night. It’s an odd situation. The paid employees go home, and the unpaid revenue drivers are locked away in isolation so we can get this in. You just hope they can get everyone in and out of there without cases coming up because that’s the only thing that can derail it.”

Are Gonzaga and Baylor the best teams?

“Yes, it’s not close. Gonzaga can really score and can score from multiple spots, so they don’t rely upon one or two guys. And their defense is good. They’re top 5 in offense and top 15 in defense. That’s usually a formula for winning.

“Baylor is top 5 in both. They can defend anybody, and their big guys are good. They’re not traditional big guys but Jonathan Tchamwa Tchatchoua can really move. He’s so energetic, long, and athletic. He affects the game with how hard he plays.”

“Cade Cunningham (from Oklahoma State). He’s a 6-foot-8 point guard that can do everything. He can shoot it, handle it. He’s a good passer. He’s got the ability to defend at multiple positions. He’s alert. He makes plays late in game. He’s a unique talent.”

What have you binge-watched lately?

“I just finished Broadchurch on Netflix and it’s awesome. It’s an English murder mystery show. I really enjoyed it. It’s a couple of years old but it’s legit.”

What musical artists are you listening to?

“Jeezy is a staple of mine, and Drake. Those are two go-tos. I met Jeezy several years ago. We go back and forth via text every now and then. Every time he’s been in Charlotte (on tour), I’ve been out of town. I haven’t been to a concert yet but I’m planning on it.”