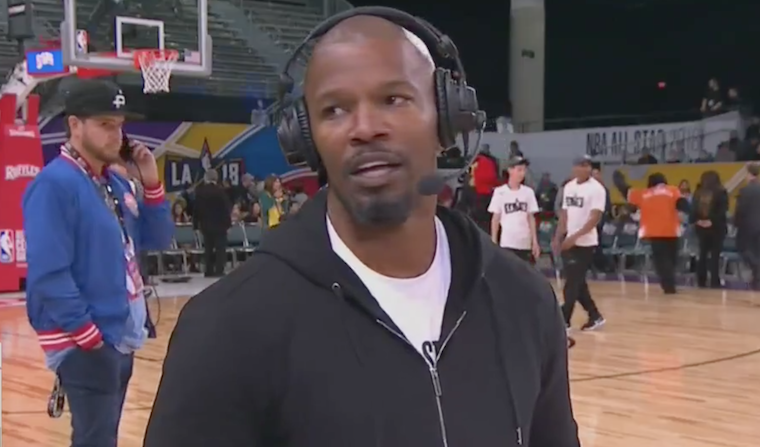 Jamie Foxx didn’t score any points in Friday’s NBA Celebrity All-Star Game. Is it possible that he was distracted, thinking about an interview that happened prior to the game?

Foxx appeared on SportsCenter earlier in the evening and the conversation ended abruptly when Michael Smith went into territory that was apparently off-limits. Don’t ask Jamie Foxx about his relationship with Katie Holmes, people.

If you have Foxx on TV, this is probably the response you’ll get:

Foxx might not have even heard the second part of that question because he took his headphones off as soon as he heard Katie Holmes mentioned. (If you’re not familiar with the reference, Love & Basketball was a 2000 film starring Omar Epps and Sanaa Lathan as childhood sweethearts and basketball stars who go on to professional careers with differing levels of success.) This is why athletes don’t like to be interviewed before the game!

But Smith wasn’t just asking a goofy question. According to Us Weekly, Foxx and Holmes did indeed play basketball on Valentine’s Day. However, despite Us Weekly reporting the two were dating in 2013 and paparazzi occasionally catching the pair out in public, Foxx and Holmes have been very secretive about their relationship. If they attend public events such as the Grammys, they arrive separately and often leave through restaurants, hotels or apartments through back-door exits.

However, even if the couple is more willing to be public about their relationship now, it doesn’t mean that Foxx wants to talk about it. Smith may have thought a Celebrity All-Star Game was a casual, relaxed enough setting to ask about it. All in good fun, right? Except if Foxx doesn’t want to go there.

Maybe Foxx and Smith can play one-on-one and if Smith wins, he gets to ask at least one question about dating Katie Holmes.  What if Foxx wins? Uh, maybe he gets to ask Smith what he thinks about SportsCenter these days?