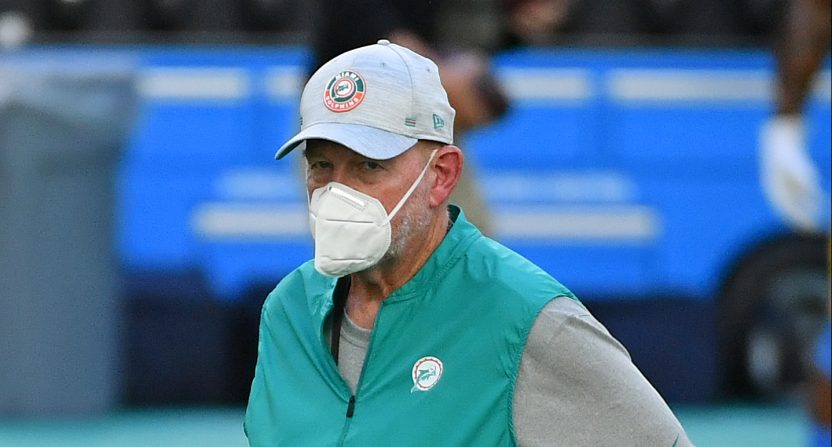 Well, according to a ESPN story @AdamSchefter claims Chan Gailey and Miami Dolphins are ending their relationship.https://t.co/DIBCqUMRXN

But it turns out that Schefter never reported that Gailey was fired, and it appears ESPN fell for a fake account.

We've seen it all. ESPN got duped by a fake Adam Schefter account.

Chan Gailey has not been fired. pic.twitter.com/h5DTGyjmTK

This came after the 1 p.m. ET SportsCenter even mentioned the “report” on air:

Even made it onto live air. Very out of character breakdown here by ESPN. https://t.co/q7HWGOidce pic.twitter.com/meGgEKEnS8

The tweet about Gailey being fired seems to originally come from an account (now deleted) with the handle @TuaNeedsHelp, featuring Schefter’s name and avatar.

ESPN retracted and corrected the story.

The story has been removed from ESPN.com, and replaced with this correction. The story was also mentioned on the 1 p.m. ET edition of SportsCenter.

No ESPN reporters reported on Gailey or the Dolphins, or were involved in the error, which was made internally. It was on ESPN.com for about 20 minutes. It also ran on social channels.

I get it – mistakes happen. But if you’re ESPN, you need to have better practices in place to ensure that your online and TV outlets aren’t crediting one of your reporters for reporting a news story that they didn’t report and hasn’t happened. It’s a horrible look all around, especially in the era of everyone screaming “fake news!” every ten seconds. It’s better to be correct than first, and while ESPN was first, they sure as hell weren’t correct in this instance.