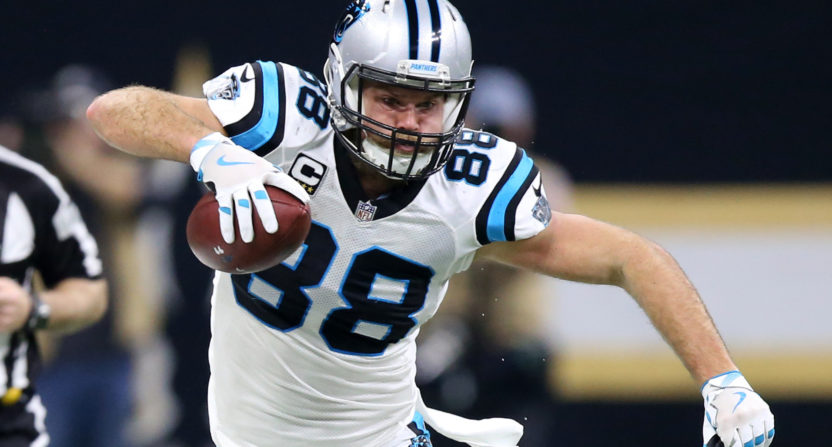 This is a tale of two tight ends – Greg Olsen and Jason Witten. Both have been Pro Bowlers with lengthy, distinguished careers in the NFL. Both were highly sought after by television networks with NFL broadcast rights this offseason. Specifically, both were involved in the search for Jon Gruden’s replacement for Monday Night Football.

Witten decided to retire from the Dallas Cowboys and is now ESPN’s lead analyst for Monday Night Football alongside Joe Tessitore and Booger McFarland. It’s still very, very early in his career but the review from his first game is that there’s definitely room for him to grow into the role. It’s fair to say Witten didn’t make the immediate splash that his former teammate Tony Romo did at CBS.

Unlike Witten, Olsen decided to return for another year with the Carolina Panthers. Unfortunately, Week 1 was the worst case scenario for Olsen. He re-fractured his foot that has already given him so many problems over the last year.

Olsen is hoping that he can sit out for a few weeks and delay surgery until the end of the season, but that may be optimistic. However, it seems as if he’s willing to do everything he can to get back on the field in 2018.

But with his time away, it’s fair to ponder if it will include any media work. Last year when he was injured Olsen worked as a Fox game analyst in a Week 11 contest between the Rams and the Vikings. He also did work for ESPN in the lead-up to the Super Bowl.

With Olsen’s injury timeline a question mark at this point, will he and the Panthers be comfortable with him moonlighting as an analyst once again? Would Olsen be interested in a comeback to the broadcast booth or does he feel the need to focus on rest and rehab with the hopes of coming back in 2018?

It’s probably not fair to ask this question in hindsight because Olsen obviously made what he felt was the best decision at the time. But one can’t help but wonder about what would have happened had the roles been reversed and Olsen chose to go into television this year. Would ESPN have offered him the Monday night job over Witten? Could he have ended up in another prominent role in Bristol or elsewhere? We obviously will never know, but the timing and the circumstances are extremely unfortunate given the choice to come back and play. Olsen could be like Jay Cutler and be flirting with the idea of a media career but ultimately decide to stick it out in football and not come back to the broadcast booth. (Although I doubt he’ll follow Cutler’s footsteps towards becoming a reality television star.)

While it’s easy to do a bit of revisionist history looking at Olsen’s decision and the circumstances that followed, the broader point may be what it says to athletes who find themselves in a similar situation next.

We already know that television is becoming a more and more attractive option for prominent NFL players on the tail end of their careers. And why wouldn’t it? Witten is making millions more in announcing games than he did as a player and has no threat of short or long term injuries in the broadcast booth. It’s a lucrative proposition featuring more pay for a lot less physical strain.

Does Olsen’s injury provide more evidence to those players considering walking away that it’s just not worth the additional wear and tear and one more surgery that they may have to endure? Now Olsen is looking at a situation where his 2018 season is in jeopardy and the top media jobs have been filled by his contemporaries. If a similar opportunity in broadcasting comes to a player on the edge of thinking about retirement, they may look at the stories of Olsen and Witten and decide they’re better off taking the microphone.