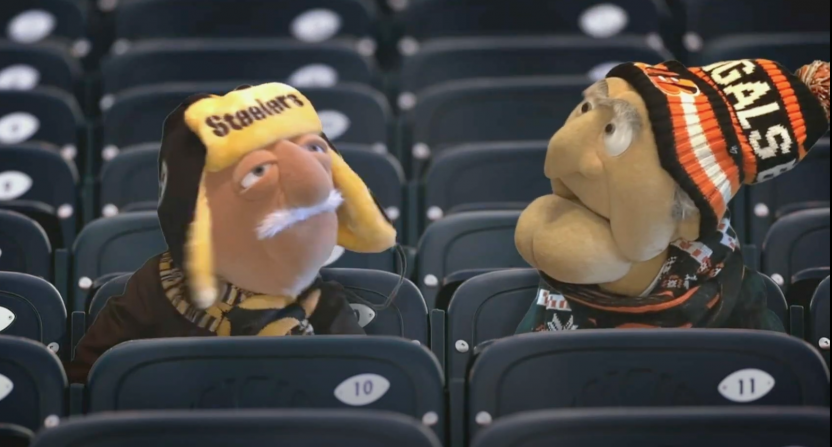 The Muppets opened the telecast with Kermit the Frog and Miss Piggy setting the scene from their “Muppet Night Football” booth before turning the broadcast over to the regular MNF crew of Steve Levy, Brian Griese, and Louis Riddick and the regular business of the evening.

If you missed it, here is the opening from Monday Night Football featuring The Muppets. (And for those objecting to The Muppets, are they really much worse than that Progressive Insurance animation with “Monday Night Kickoff”?)

Viewers who weren’t aware that Disney would break out The Muppets for the holiday-themed telecast were likely wondering what exactly was happening.

What's the deal with the Muppet theme tonight?

Who the fuck looked at Monday night football and said “you know what it’s missing? The muppets”

But this is the third consecutive year that ESPN producers tried something special for the MNF broadcast before the holidays with previous openings based on A Christmas Carol and ‘Twas the Night Before Christmas.

Sooo… ummmm…. the Muppets are commentating Monday Night Football?
I’ve only had one glass of wine…. so I can’t be hallucinating.

Based on social media, however, the majority of fans seemed to take The Muppets on Monday Night Football in the spirit which ESPN intended. But other than the opening, those fuzzy guys weren’t too intrusive to the telecast. ESPN probably could’ve used them more, especially when the game itself wasn’t particularly entertaining.

Yes, this was an important game for the Steelers. Though they sure didn’t seem to play like it in a surprising 27-17 loss to the Bengals. Yet going in, this looked like a lackluster matchup with Cincinnati coming in with a 2-10-1 record. Maybe Ben Roethlisberger — 170 yards, completing 20 of 38 passes — was distracted by sideline reporter Fozzie Bear. Or he was afraid of being heckled by Statler and Waldorf.

According to ESPN’s Front Row release, using The Muppets was the MNF production team’s idea, not Disney leaning on ESPN for some cross-promotional corporate synergy. After watching the following clip with The Muppets performing a version of “Carol of the Bells,” director Rico Labbe said, “This is it. This is what we want to do.”

As could be expected during the COVID-19 pandemic, the segments involving The Muppets were each shot remotely with puppeteers working at home in front of a green screen. Upon seeing a test over Zoom, ESPN senior coordinating producer Julie McGlone was convinced the team had something good on its hands.

“Everybody was smiling and laughing,” said McGlone. “I was like, ‘This is what we want for our viewers!’ We want the whole family to be enjoying it.”

From there, the decision was made to title the opening “Muppet Night Football” while producers pushed for more time on the broadcast to feature The Muppets. And ESPN had a special holiday edition of MNF that even Statler and Waldorf could enjoy.