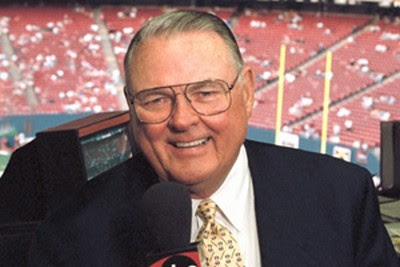 One of the greatest sports voices has died. Keith Jackson, synonymous with so many of the memorable moments in college football and sports history over the past 50 years, died late Friday night according to family at the age of 89.

Jackson spent the vast majority of his television career with ABC Sports. Over his 40-year ABC career, Jackson became known as the preeminent play-by-play voice of the biggest college football games over the years. To many people, Jackson was a college football broadcaster. But while his college football career alone would be legendary, it would be a disservice to forget the versatility Jackson showed that was a staple in the Wide World of Sports days.

In addition to college football, Jackson was the first play-by-play anchor for Monday Night Football in 1970. In the 1972 Munich Olympics, Jackson covered swimming and covered Mark Spitz winning seven gold medals. It was one of 10 Olympic Games that Jackson would cover for ABC.

At various points, Jackson called a hodgepodge of sports that Wide World covered. Jackson did golf, boxing, NBA and college basketball, the USFL, an Evel Knievel jump and various forms of auto racing including the Daytona 500, Indianapolis 500 and the Monaco Grand Prix.

Most notably, Jackson did Major League Baseball for ABC for years. Jackson was on the call for one of the greatest World Series moments ever, when Reggie Jackson hit three home runs off of three pitches in Game 6 to win the 1977 World Series for the New York Yankees.

But most of us will remember him for his college football broadcasts and that was where Jackson spent the majority of his career. Just name a classic game and it seemed like Keith Jackson was calling that game.

There are so many moments and games that would have been a dream to call, but the most memorable may have been Jackson’s final game as a broadcaster. Jackson’s final call of Vince Young running into the end zone for the winning touchdown at the 2006 Rose Bowl was a perfect way to cap off a legendary career.

Keith Jackson was also known for his catchphrases, some which have infiltrated the college football vernacular. The phrases “Granddaddy of Them All” referring to the Rose Bowl and “The Big House” for Michigan Stadium, were two phrases that came from Jackson that we now use all the time. Jackson’s most popular catchphrase was “Whoa, Nellie,” but he very rarely said it during game broadcasts, if at all.