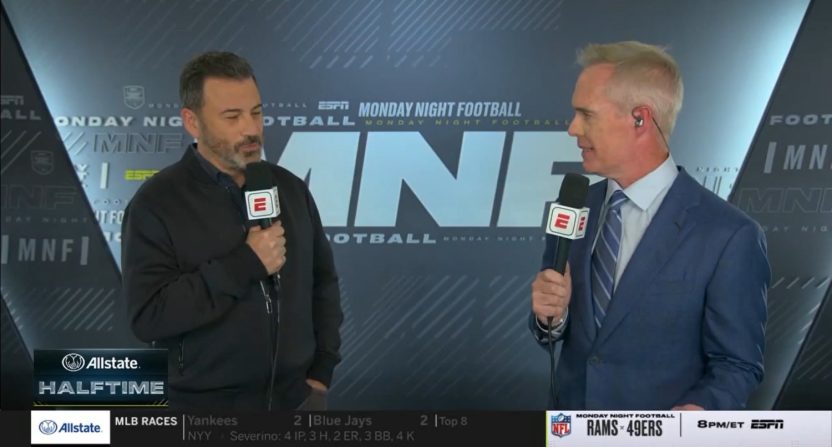 Kimmel briefly joined Buck in the Monday Night Football booth to promote his late-night show, which is taping in Brooklyn, New York this week. And during his appearance, Buck asked Kimmel if he would be able to convince Howard Stern to leave his Long Island house while the ABC late-night host is in town.

“Here’s the one thing that I really want to know,” Buck asked. “Are you going to see Howard Stern while you’re in New York? Can you get him out of his basement and into a public setting?”

When the COVID pandemic started in early 2020, the radio host and his wife, Beth Stern, left their mega Manhattan penthouse for their eastern Long Island home and haven’t looked back. Stern had a studio built in his basement and continues to scoff at the idea of returning to a public setting, even for dinner.

“COVID has become a great excuse for him to not go anywhere ever,” Kimmel told Buck. “I am on his show [Tuesday] morning, that will not be in person, that will be over the magic of Zoom. I am hoping to see him, but I’m not counting on it.”

Kimmel, who is close friends with Stern, has seen his idol since the start of the pandemic. The late-night host and his family spent time at Stern’s Long Island house for a few days over the summer, under the constraint of not being able to leave the residence during their four-day stay.

Stern was unable to see Buck and Kimmel’s commentary live thanks to his strict 8pm bedtime, but his radio show staff alerted him of the banter Tuesday morning.

“This is very good publicity. I would think ABC halftime is the most popular television show of the week. Monday Night Football, right?” Stern boasted on his SiriusXM Radio show. “It’s the one place where people still get together in a group and watch TV. It’s not the Oscars anymore, it’s not the Emmys anymore, it’s sporting events and football is number one.”

After playing the Monday Night Football audio on his own show, the King of All Media appeared especially pleased with Buck’s mention of “Jimbel Kimbel,” a reference to one of Stern’s Wack Packers.

“Jimble Kimbel, I love it,” Stern said. “Talk about a plug. What is that worth when Joe Buck brings you up and talks about you on Monday Night Football?…It probably costs a fortune!”

Kimmel did appear on Stern’s Tuesday morning show via Zoom, where the former shock jock admitted he’s struggling to reacclimate himself to a society where COVID is still prevalent. In December 2020, Stern signed a five-year contract extension with SiriusXM, reportedly worth $500 million, but he has yet to appear in their New York City studios.