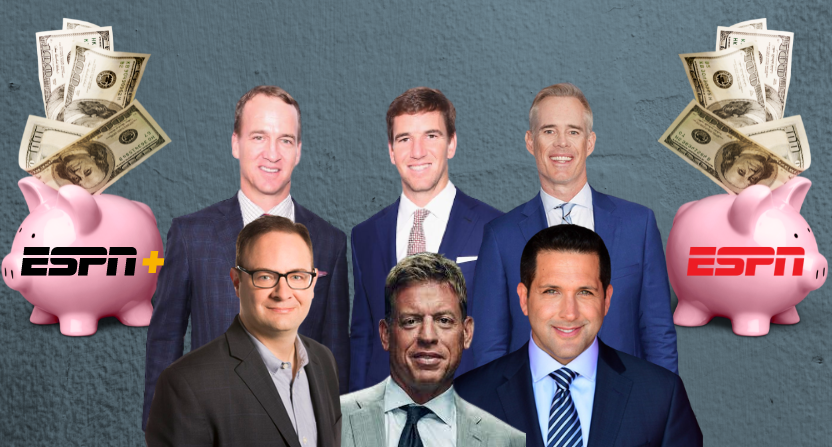 Nearly five years ago ESPN held its most notable round of talent layoffs with over 100 well known employees being let go. This marked the start of a new era for ESPN; with the specter of cord-cutting looming over the company, there was significantly more scrutiny placed on cost-reduction after decades of mostly unimpeded growth and success.  The sense of security long term employees had held with confidence evaporated quickly.

It wasn’t a one time thing either, as ESPN laid off another 300 people in November 2020, While ESPN has hired and retained some notable people in between and after those two large layoff rounds, we’ve unfortunately seen a pretty consistent flow of big names who have left ESPN. Below just a few from the last couple of years:

The circumstances of those exits, as well as countless others, all have their own unique story and set of factors. That said, it would hard to deny that the costs of talent deals were being scrutinized significantly more than they used to be, which certainly played a role in a lot of those listed departures.

In a lot of these cases, talent simply found ESPN’s offer wasn’t as good as another company’s. Other times, ESPN didn’t even make an offer, knowing it wasn’t going to be received well or seen as a competitive offer. This was/is a new reality for ESPN, in that just like a pro sports team making tough decisions with their payroll, the network is now tasked more than ever with the dreaded challenge of “finding efficiencies”.

That’s why last month was a bit of a shock to the system as ESPN re-signed Adam Schefter and Adrian Wojnarowski to massive extensions with Schefter’s deal reported to be $9 to $10 million per year for five years and Woj’s reported to be $7 to $8 million per year for the same term. These deals came off the heels of ripping away (okay fine….trading for) Joe Buck and Troy Aikman. Aikman reportedly got $90 million for five years with Buck getting $75 million, a huge raise made more impressive given Buck would be taking on a smaller role than the one he’d had at Fox, giving up MLB duties. May we all one day get a huge raise for less work!

The total price tag on these deals? Andrew Marchand pegs the total at $250 million but notes that Woj and Schefter have “a chance for each of them to make more”, which we’ll get into in a second.

So the big question here is how exactly is ESPN suddenly splurging on some key hires, while still seemingly comfortable allowing other well known names to walk away with costs being a big part of those decision? The answer to that question can largely be found in the various press releases announcing there most latest big names hires.

From the Schefter announcement:

From the Woj annoucement:

From the Buck and Aikman announcement:

“As part of the agreement, Buck and Aikman will both contribute content to ESPN+, with more details to be announced at a later date.”

What’s become increasingly clear is that if you are someone ESPN truly covets, and by that I mean they think you are strategically key to the company (a very high bar), ESPN WILL pony up and they’ll do that by throwing some ESPN+ money at you as the gravy.

With increasing costs for live rights fees (the amount they have to pay to leagues and conferences) as well as continued cord-cutting, ESPN is being squeezed in terms of what the company can spend on talent and production. While that’s a reality for every sports network right now, it’s a very different story for ESPN+, who like all newish streaming services, is expected to lose money for an extended amount of time.

ESPN+ is housed within Disney’s DTCI (Direct-to-Consumer & International) unit which is a Disney subsidiary headquartered in Burbank. The unit also runs Hulu and Disney+ and was essentially developed as Disney’s answer to Netflix’s growing streaming dominance.

The inner mechanics of budget, decision making, and accounting between ESPN and ESPN+ under the DTCI umbrella aren’t fully known, other than it’s a collaborative  process between Bristol and Burbank. What is clear is that big names are being nudged by some combination of their agents as well as ESPN executives to have some ESPN+ component in their deals.

Essentially ESPN can pay you X for what you do, but ESPN+ can pay you Y for something to be determined. Add X and Y together and you’re getting these monster deals that other potential suitors can’t match. Fox doesn’t have a sports streaming service. NBC’s Peacock and CBS’s Paramount+ have had significantly less success to date than Disney+ and ESPN+. No other network has this slush fund for talent they can go to when they really need to retain or hire a notable personality.

This isn’t a new thing either. When Richard Deitsch dropped that Stephen A Smith was making $12 million a year at ESPN (previously thought to be $8 million a year), Andrew Marchand pulled back the curtain on the discrepancy.

“Smith’s contract is for $12 million per year, according to sources. As The Post previously reported, Smith’s personal salary is $8 million a year — which is correct — but he also has a $4 million-per-year production contract. “

Stephen A’s World airs on ESPN+ and as noted, “Stephen A. is the executive producer of the show with his production company Mr. SAS Productions.” Similar to Hollywood where every movie star figures out there is considerably more money to be had by having their own production company for their projects, that trend seems to be arriving for the chosen few in sports media, especially for ESPN talent.

The Manning Brothers, long courted by everyone, have followed the same blueprint by creating content on ESPN+, producing the “Places” series which includes Eli’s Places, Peyton’s Places, and other iterations hosted by Abby Wambach, Vince Carter, David Ortiz and Ronda Rousey. The ESPN+ money from these deals put ESPN in pole position to work further with the Manning brothers while also keeping them away from working with competitors.

Fast forward to now and ESPN and the Mannings have now extended the partnership wth the Manning brothers production company, Omaha Productions now working with ESPN to bring more ManningCasts/MegaCasts to more sporting events. Would the ManningCast have ever have happened if the Manning brothers weren’t first wooed by the significant amount of ESPN+ money that came with fewer strings attached in addition to lower ratings expectations and a much less demanding schedule? Tom Brady seems to be following the same blueprint as well with Man In The Arena on ESPN+ perhaps leading to bigger things down the road. 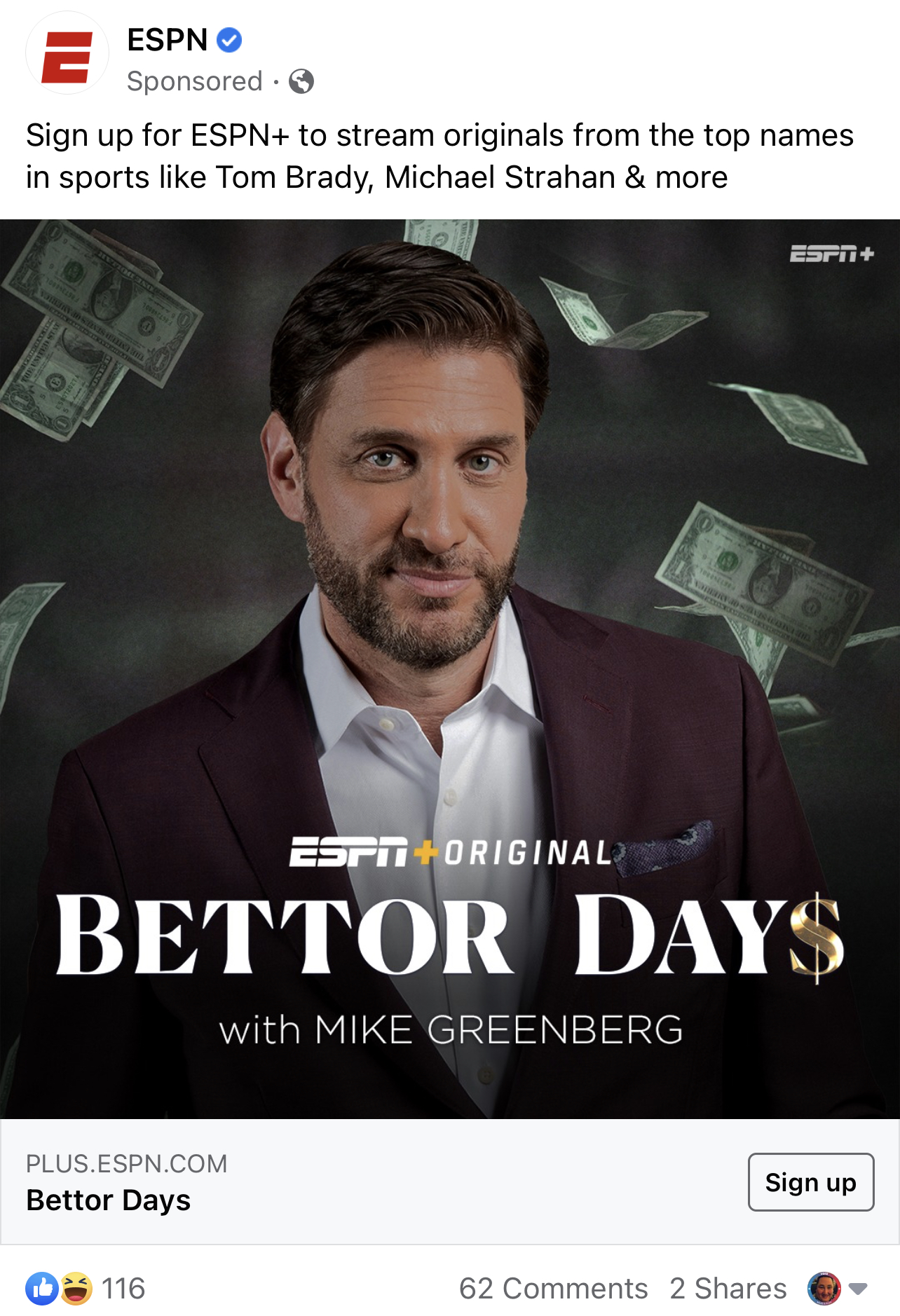 Mike Greenberg is also on the list of highest-paid ESPN employees, reportedly at $6.5 million a year. Greenberg hasn’t had an extension made public since 2017, predating ESPN+’s launch, but he’s already providing content to the service. It’s not hard to fathom he’ll follow the trend and potentially ramp up his ESPN+ content production and perhaps launch his own production company. That’s just how you max out your pay from ESPN, and major players and agencies seem to all know the game at this point.

The big question is are these ESPN+ deals actually beneficial for ESPN+ or is just a way to secure top talent for ESPN? We’re so early in the process that it’s difficult to say. There’s not much data yet, and any of the vaguely mentioned projects from Buck, Aikman, Woj, and Schefter are probably more than a year away at the earliest.

The entire streaming industry is chasing Netflix’s monthly churn rate of a little over 2% a month (meaning 2% of Netflix’s customers unsubscribe a month). All other streaming services are mostly in the 5-10% window. It’s hard to grow a streaming service when you’re leaking that many customers regularly.

It’s not a secret that most people signing up for ESPN+ are doing so because there is a specific game, fight, or sport they absolutely have to watch. However, when that game or season is done, do they stick around at seven bucks a month? There is a LOT of money to be made (and spent) by keeping those people subscribed. Unfortunately it seems the same type of investment in these mega-deals for big names hasn’t materialized on the 30 For 30 front which has seen less output since ESPN+’s launch and I’d say is more paramount to retaining subscribers.

Do you subscribe to ESPN+? If so, what is your primary use for it?

ESPN, or moreso ESPN+, is spending millions of dollars betting that huge names may keep people around despite very little concrete information as to what these big names will actually produce for ESPN+. If this strategy of grabbing the biggest names in the industry and subsidizing these contracts with ESPN+ compensation remains viable, and if the pockets are as deep as they seem to be with this structure, it’s not impossible to imagine other huge names getting the same package offer. Imagine the Inside the NBA group  or other similar-level targets. That sounds crazy, but so did the idea that Fox would lose Buck and Aikman with little buildup, warning, or actionable way to stop it from happening. That’s the power ESPN wields with this compensation blueprint. They can outspend you because Disney holds the cards with their streaming services. They’re well ahead of any legacy media competitor in the space.

For now it’s a nice reversal of fortune for ESPN, which is no longer as handcuffed in spending for the talent they feel they must either attract or retain at any cost. That said, if I were actually trying to grow an audience on a streaming service, I think 30 for 30 as well as some of the people who have exited ESPN at the top of this article might be better bets than those now commanding these huge deals with very little history in creating new content vehicles.

Regardless if this spending on these names has fiscal merit or not, it’s hard to argue ESPN is not in a better place product-wise with the likes of Buck, Aikman, the Mannings, Woj, Schefter, Stephen A, and Greenberg in the fold. Unfortunately the same can’t be said for the former employees who didn’t even receive an offer, deemed unworthy of going to the ESPN+ well to retain.