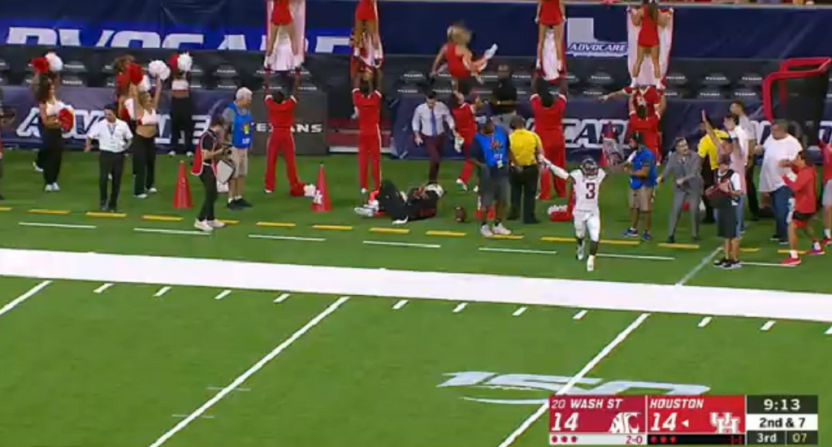 A University of Houston cheerleader took a nasty fall on the sideline during Friday night’s college football game against Washington State. And it appears the fall was caused by an ESPN reporter bumping into the base cheerleader.

In the third quarter, Houston quarterback D’Eriq King threw a pass to a diving Keith Corbin along the team’s sideline. Corbin went rolling out of bounds, and ESPN reporter Paul Carcaterra moved out of the way to avoid the wide receiver. However, while doing so, Carcaterra collided into a base cheerleader for Houston. The base cheerleader was holding another cheerleader (the flyer), and dropped her after the contact from Carcaterra.

ESPN sideline reporter really panicked because he saw a player on the ground sliding towards him and took out a cheerleader….. https://t.co/pwXHKca6aQ

There’s been no update on the cheerleader’s status, and hopefully, she’s okay. But that did not look good.

Just a sore body and a bad headache! Very thankful it wasnt worse

As for Carcaterra’s role in this, it’s obviously instinct to get the heck away from a player diving into the sideline. But, he probably could’ve been more aware of the cheerleading routine going on a few feet away.