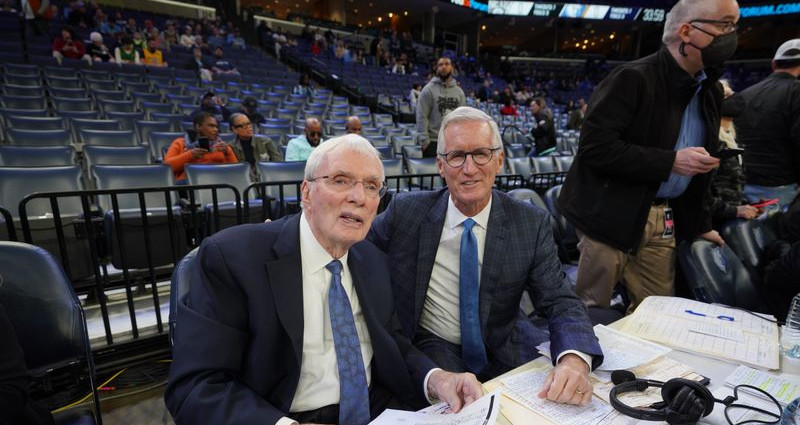 We should all be as lucky as Hubie Brown—doing what you love for a living in our golden years with a supportive boss. It never feels like work when it’s your passion.

Brown, 89, doesn’t need a ceremonial rocking chair. Brown needs a broadcasting seat on the sidelines of a basketball arena. If he’s healthy enough, he deserves to have one for as long as wants.

Old-school NBA fans rejoiced when The Athletic’s Richard Deitsch reported that Brown will return to call games for ESPN. That’s amazing considering his age and longevity (36 years as an analyst). According to Deitsch, Brown (seen at left above with Mike Breen ahead of a game in March) will call 15 games for ESPN this season. And here’s hoping there are many more ahead.

It’s tough to work in the media. It’s even tougher to age in television. Viewers can be fickle. Social media can be cruel. Complaints, nasty comments, and bad jokes are everywhere. You don’t have to look hard. But Brown is an OG who earned his respect. He changed the game with his unique combination of bluntness, insightfulness, and acerbic wit. Brown perfected his craft by seeing details that others missed.

The best compliment you can give about Brown? He’s brutally honest. Disagree with his opinion all you want. But you never get the sense that he is minimizing, sugarcoating, or shilling. He tells you what he thinks and why he thinks it. If you don’t like it, that’s your problem. How refreshing. Don’t you dare call him a grump. Brown has been dropping truth bombs his entire life.

Unlike some broadcasters, Brown has never had an interest in being a hype man. He always comes across as a teacher. He approaches a basketball court as if it were his classroom. If you want to learn more, Brown is eager to explain more.

ESPN reporter Israel Gutierrez has a special fondness for Brown calling him “my American grandfather.” He told Awful Announcing that working with Brown has been a highlight.

“Whenever I was on the air with him, I tried as much as possible not to interrupt because he’s got so much insight. It always just felt like more important information because it was coming from Hubie,” Gutierrez said. “While some commentators get caught up in a certain style of basketball, or only have good information if it’s somehow related to when they played or coached, Hubie’s basketball commentary is timeless. It would work in 1962 or 2022.”

Brown’s sharp mind led him to a Hall of Fame career as a coach, winning an ABA championship with the Kentucky Colonels in 1975. In the NBA, he coached the Atlanta Hawks, New York Knicks, and Memphis Grizzlies. His Grizzlies’ stint was especially impressive because he left broadcasting to return to the sidelines in 2002. At the age of 69.

Brown had a short stay but a memorable one in Memphis. In his second season, he guided the Grizzlies to their first-ever playoff appearance in 2004. He resigned the following season, citing health reasons.

Brown was inducted into the Naismith Memorial Basketball Hall of Fame as a coach in 2005 . But he’s stayed involved in the game as a broadcaster since then. He still has plenty to say. And his age is an advantage when it comes to having a proper perspective on the history of the game. This is a guy who coached Kareem Abdul-Jabbar and Oscar Robertson as a Milwaukee Bucks assistant.

When Brown talks, players, coaches, and fans should listen. We’re fortunate to hear his wisdom because the average American retires at the age of 65. Credit ESPN for being kind to octogenarian broadcasters Dick Vitale (83), Lee Corso (87), and Brown. Compassionate is in short supply these days, so it’s nice to see it at the corporate level.

Will Brown ever call it quits?

“You can only paint the fence so many times, right?” he told Michael Powell of The New York Times in 2019 “You get to 80 years old, I guarantee good friends are dying every month. And you’re a city guy, and guys you played against, they are all passing away, too.”

Brown added: “See, I enjoy this and it keeps me sharp. You understand?”

Retirement isn’t for everyone. Certainly not for icons.