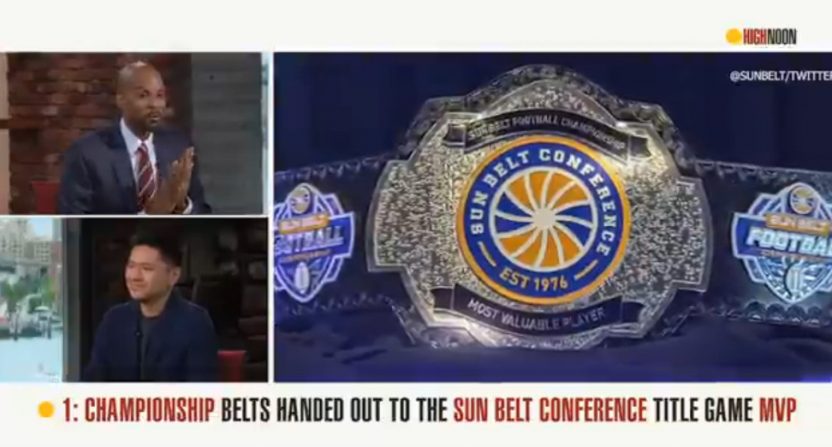 For a long while, ESPN has been trumpeting their app, with Disney CEO Bob Iger calling it the “future of ESPN” in February and saying later that month it will eventually be where most people “experience ESPN.” And when watching anything on ESPN, there are countless ads to check out particular shows on the ESPN app. But the future has some issues, and one of those was shown Thursday when the High Noon Twitter account responded to someone wondering why the clips hosts Bomani Jones and Pablo Torre react to don’t appear on the show on the ESPN app:

Unfortunately, there are rights restrictions on the app. All elements air on ESPN. Hoping it will change one day. Regardless, thanks so much for watching. https://t.co/fpNfK05DLB

As Sports TV Ratings noted after retweeting the High Noon tweet in question, that does send a message to viewers that the app doesn’t deliver the full experience of watching certain ESPN shows:

LRT: the highlight rights/app thing doesn't get enough attention. ESPN is conditioning people to not even bother to try watching certain stuff on the app.

Now, this isn’t just an issue limited to High Noon. Rights to highlights and other clips are tricky, and they often don’t cover all platforms or provide comprehensive permissions. During this year’s FIFA World Cup, for example, ESPN was restricted to two minutes of highlights per edition of SportsCenter and was prohibited from showing highlights on other studio shows, their website or their social media platforms, so they had to get creative with Lego highlights. And during the 2016 Summer Olympics, ESPN’s online highlights deal with NBC was cancelled after just two days thanks to challenges around if ESPN could place advertising on the same page as those videos.

We’ve seen highlights rights pose issues for other networks as well, most notably with the old Fox Sports Live (rest in peace). Plenty of Canadian fans of anchors Jay Onrait and Dan O’Toole were interested in following their unavailable-in-Canada show after the fact, but video of it couldn’t be posted online in its entirety thanks to highlight restrictions, so they got around that by providing a Fox Sports Live audio podcast. And, as with shows like High Noon on the app, that’s better than nothing, but it’s still not as good as the on-TV experience.

Of course, that’s not entirely a bad thing for ESPN either. Some of those February comments from Iger talked about the need to “manage the migration [to the app] very carefully,” because “right now we have a business — the multi-channel business — that is serving our company quite well.” Now, that doesn’t mean that ESPN is sabotaging its own shows on the app to keep people watching on TV; if they had app rights to those videos, they’d presumably use them, because people complaining about a subpar app product isn’t exactly great for the business. But regular TV (and the way it’s tracked, especially in ratings that still don’t always cover all streaming) is still very important to ESPN, and that may limit how much they’re willing to spend on extra rights to improve the off-TV watching experience. And there are other factors in play too; as mentioned, many of those rights are very limited by platform, and that has a lot to do with leagues wanting to bolster their own channels. It’s not particularly simple to just put everything on the app.

And that’s maybe the key takeaway here. The app may be the “future of ESPN,” and it has a fair bit going for it. It’s a pretty solid place to watch live sports, especially if linked to both a cable TV subscription and a ESPN+ subscription (as noted before, many properties aren’t fully available without both), and that’s probably the biggest thing fans need it for right now. And it does offer ESPN studio programming, both what’s currently live on the linear channels and some archived material, even if some of that’s limited by rights restrictions. That’s better than not having it available at all. But the High Noon tweet here is maybe a case in point of how we’re not yet where the app is really becoming the key way people “experience ESPN.” For now, there are still important elements on TV that aren’t on the app, and the “future of ESPN” is still a little ways off.