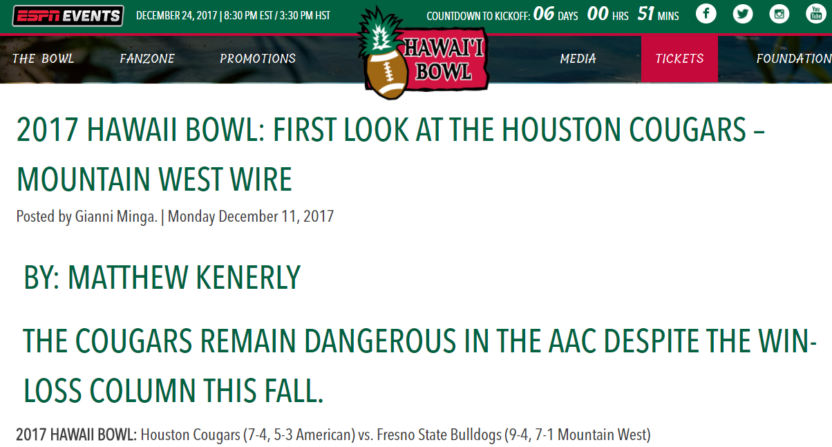 The Hawaii Bowl traditionally falls on Christmas Eve, which means it’s not generally a bowl that garners a lot of attention, nor does it feature marquee teams.

This year’s edition pits Fresno State against Houston, and while both those programs are generally solid, and the game might indeed end up a fun one, it kicks off at 8:30 PM Eastern on Sunday night, a window vacated by NBC’s Sunday Night Football for a reason. (NBC will air an always-amusing Saturday night edition of Sunday Night Football on the 23rd, instead.)

Pretty standard holiday evening programming for ESPN, whose ESPN Events arm manages the game (and a dozen or so other bowl games, as well.) It will likely draw a decent amount of viewers; ESPN’s college bowl game promotional machine remains a marvel, as evidenced when other bowls have a hard time existing outside of the ESPN umbrella.

Also standard: the bowl website, heavily adorned with ESPN Events branding. It’s a standard template for ESPN bowls, and presumably the site tools and hosting is a part of the ESPN Events package; if you visit any of their other bowl sites (and you probably shouldn’t, if you value browser stability) and you’ll find only minor variations on the overall layout. (Also, the Bad Boy Mowers Gasparilla Bowl site turns your cursor into a lawnmower. Yes, seriously.)

The Hawaii Bowl site has something the other sites in the network don’t, though: a news and updates section populated by posts from other outlets, repurposed in full without a link back to the source.

I mean, I'm flattered that the @HawaiiBowl thinks my work is good enough to post on their official site, but it's not very cool that there's no link back to the original article or anything since, you know, clicks are good. Flattered, but also disappointed. pic.twitter.com/J9HnIeuz5E

And rather than modifying to link to the article, they take it down wholesale instead. That's cool, I guess.

It lives on in archived form, and via these screengrabs: 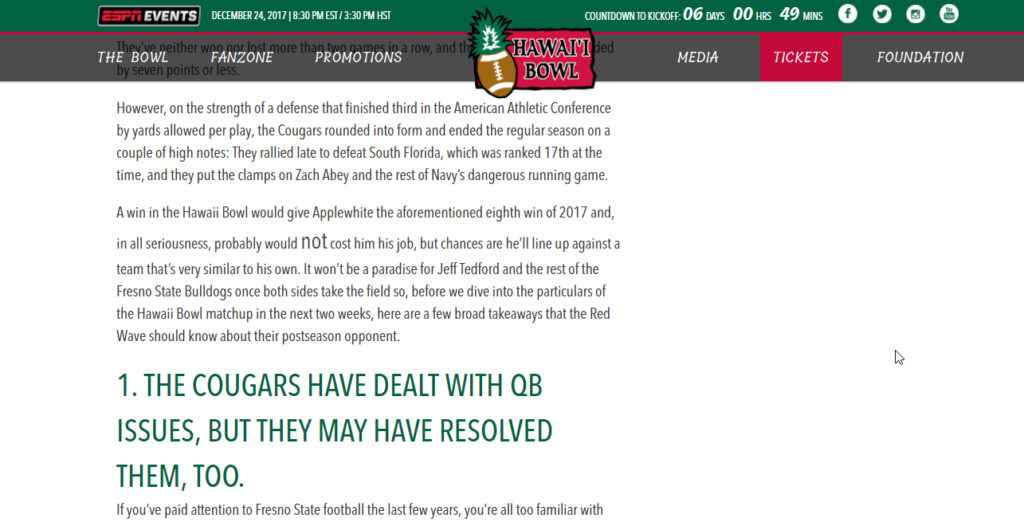 It’s credited, of course, but simply republishing another outlet in full is bad enough, much less without offering a link back to the source in any way.

And it’s not just Kenerly! There are posts from SB Nation and The Fresno Bee as well. The content the site posts doesn’t even always directly pertain to the Hawaii Bowl; the SB Nation post in question, written by Morgan Moriarty, was simply a rundown of bowl swag. And while it did touch on the Hawaii Bowl, the Hawaii Bowl reposted the entire article in full: 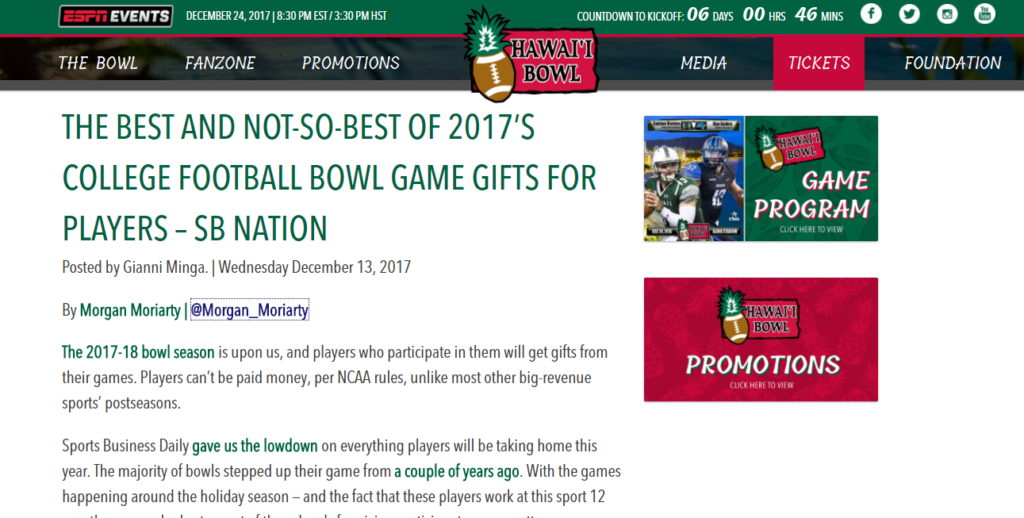 Interestingly, the links contained within the source article are all still active; that is, when Moriarty linked to other SB Nation posts within her piece, those links seem to have survived into the re-posted Hawaii Bowl site version. As anyone who’s ever used WordPress or other common online publishing platforms can tell you, that’s a hallmark of a copy-and-paste. The links include her SB Nation author page and Twitter bio, but not any link to the original source.

All of these posts are credited to Gianni Minga; according to the bowl site, he works as an event manager for the Hawaii Bowl. It’s easy to see what he’s trying to do, and it doesn’t seem a malicious error, on the surface.

It even makes sense! There’s so much great sports content out there, including sites dedicated to the kinds of programs that in years past wouldn’t have seen coverage in major outlets. Why not mine those for updates on the bowl game and to get potential viewers or attendees excited about the game, while also exposing those outlets to a wider audience? Done well, that seems like a good formula for this sort of PR work.

It certainly beats the kind of bland press releases other sites put out. It’s a good idea that falls apart with execution that amounts to theft, though, because those smaller outlets dedicated to things like Mountain West athletics are also more in need of the clicks that come with properly sharing news items. The Heart of Dallas bowl site, for example, included similar rundowns, with relevant-but-not-complete excerpts and links to the full pieces.